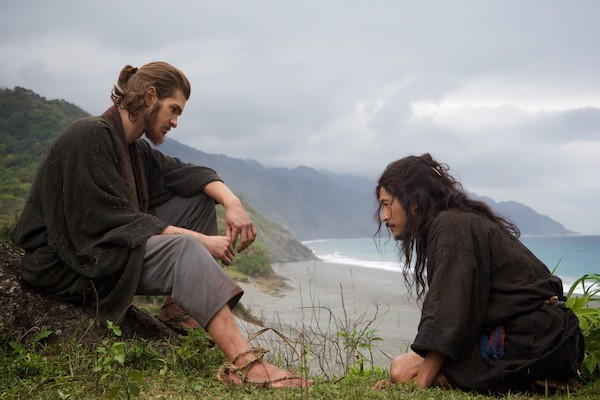 Beginning with his first picture, 1967's Who's That Knocking at My Door, Martin Scorsese has often employed cinema as a reflection on his own experiences and beliefs regarding religion. Considering he had planned on becoming a priest before opting to become a filmmaker, this makes perfect sense, and additional musings on the matter can be found in projects as diverse as Mean Streets, Kundun, Bringing Out the Dead and, most magnificently, The Last Temptation of Christ.

With Silence, Scorsese again fully turns his attention to the spiritual side, and the result is a movie that's both disturbing and deeply committed. To be clear, this isn't a motion picture for those who superficially wear their Christianity like a shiny pinback button, falling for the long con of money-grubbing charlatans like Steven Furtick and believing their devotion to the Lord ends with slapping an ichthys sticker on a car bumper. Instead, Silence is an uncomfortable and unsettling watch, better at generating questions than supplying answers — which, come to think of it, is perhaps the proper outcome for a film of this nature.

Set in the 17th century, Silence follows two Portuguese priests, Rodrigues (Andrew Garfield) and Garupe (Adam Driver) as they head to Japan to search for their mentor, Father Ferreira (Liam Neeson). Having had some initial success with converting the locals to Christianity, the Church is rattled by the fact that Japanese authorities are now forcing all of the Jesuit priests and their followers to denounce their faith or face torture and execution. The word is that Ferreira has apostatized, a rumor that Rodrigues and Garupe refuse to believe. Seeking to discover what really has happened to Ferreira, the two holy men are encouraged by the pockets of Japanese peasants who continue to serve God in silence yet aghast at the widespread atrocities being committed by the Buddhists intent on turning back the Western influence.

Adapting Shûsako Endô's 1966 novel, Scorsese and scripter Jay Cocks (the former film critic who also co-wrote the director's Gangs of New York and The Age of Innocence) have crafted a film packed to the breaking point with thorny issues. Of course, there's the basic debate over the whole matter of proselytizing in foreign territories, but the picture also looks more specifically at whether innocent laypeople are actually dying to appease God or to appease the priests. Scorsese and Cocks prefer to keep the queries percolating, only succumbing to obviousness — and, thanks to an ill-advised Heavenly voice-over, unfairness — during the final stretch of this 160-minute undertaking.

Garfield, all wrong as the amazing Spider-Man in his pair of so-so superhero ventures, follows up his strong work in Hacksaw Ridge with an equally intense performance in this picture. Those expecting a co-starring role for Driver, however, will be disappointed with his comparatively brief screen time. Among the Japanese actors, Issei Ogata is particularly memorable as Inoue, the cunning and cruel Inquisitor who engages in frequent debates with Father Rodrigues about the impracticality of bringing Christianity to his homeland. Indeed, these conversations are among the highlights of a flawed but fascinating endeavor likely to leave viewers as divided as those Red Sea waters of yore.