Shame Is For Sissies

When pure power is the only rule 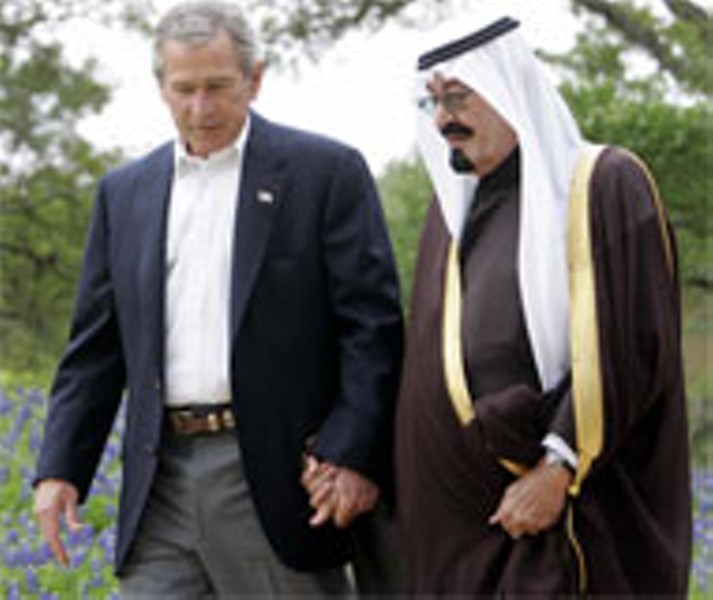 Getty Images/AFP/Jim Watson George and Abdullah sittin' in a tree . . .
We're living through a time when Americans are challenged to comprehend and assimilate things we've never encountered before, things with no clear precedent in our public lives. Some of the most bewildering are provided by our elected leaders, at the highest level of power and responsibility. If you saw Gerald Herbert's AP photo of President Bush strolling hand-in-hand with Crown Prince Abdullah of Saudi Arabia, what floored you was not the gesture. It was that this touching spectacle unfolded in full view of photographers, and that the formidable White House spin machine - which manipulates and micro-manages every particle of information that might influence the public's opinion of Mr. Bush - made no apparent effort to keep the image out of circulation.

Here was the leader of the nation that produced Osama bin Laden; the prince who exercises more control than anyone over soaring oil prices that hobble the American economy; the head of a harsh anti-democratic monarchy, a royal family linked intimately to the Bush family (like the bin Ladens) by a dozen embarrassing books. Here he was, just Uncle Abdullah, holding hands with the president of the United States and whispering sweet nothings about petroleum, the thing they both know and love the best.

Counting himself among the stunned was the fundamentalist Republican Gary Bauer.

"You wonder," Bauer told Time's Joe Klein, "if the folks at the White House have any idea of the impact an image like this has out in Middle America."

Has the United States been hijacked by aliens? Irony, inseparable from humor and from humility, is the most reliable litmus test for human intelligence. Art, literature, history and even philosophy become crude and mechanical in its absence; personality loses its charm, hypocrisy proliferates unimpeded. And this is the conundrum the Bush White House presents and has always presented. Can they possibly be so stupid, or are we dealing with something even more alarming than stupidity, an obliviousness born of cynicism, arrogance and the toxicity of power?

One theory is that we are suffering the revenge of remedial readers. There was sneering when ill-wishers outed George W. Bush and Dick Cheney as academic train wrecks. I didn't sneer too much; obviously, there's a kind of feral cunning that trumps abstract intelligence on the political battlefield. But Bush's nomination of John Bolton for ambassador to the United Nations, no less than the uncensored prom photo with Prince Abdullah, chills us because neither intelligence nor cunning can account for it. Something darker is at work.

Bolton is simply the Republican fist with its middle finger held erect, a calculated insult aimed at the Democrats, the media and the world. Is this a coarse joke, irony served White House-style? For America's most visible and sensitive diplomatic post, they offer the ultimate anti-diplomat, an obnoxious bully so incapable of diplomacy or common tact that he offends everyone he encounters, Democrat or Republican, ally or enemy.

I have some background on Bolton that isn't generally available, a report from a friend of mine (nameless unless someone doubts him) who was his classmate in military school.

"Short, arrogant, unpopular and highly intolerant of other people's opinions," Bolton's classmate recalls, "sort of Napoleonic but without any of Napoleon's talent for leadership. Making him ambassador is like thumbing our nose at the UN, and foreign diplomats understand that."

Here is the developmental profile of a classic jerk. Already hopeless in the 7th grade, praised by no one save Jesse Helms, Bolton may soon be the angry face that America presents to the world. His description by a conservative Republican as "a kiss-up, kick-down sort of guy," "a serial abuser of little people," closes the case on Bolton's character. We've all met this miserable little prick somewhere, and we all regret it.

Does the White House relish the grim irony of Bolton at the UN, or miss it entirely? Which is worse? We all know the ways of bullies, the way humorlessness and power seem to seek each other out. For epic humorlessness, few bullies eclipse Kim Jong Il, the dictator of North Korea, whose government (according to Molly Ivins) sampled the diplomacy of John Bolton and denounced him as "human scum" and "a bloodsucker." Bullies and dictators seldom get the joke, and deal simply with irony — when you don't get the joke, you smash the joker.

The Kim Jong Il factor, the fascist factor, is what we need to fear most when our president displays serene indifference to irony, to criticism, to reality. This is something new in America, this language, this body language of unrestrained power and executive fiat. To the best of my knowledge, the barely elected Republican junta has no permanent, North Korean-style lock on the government of the USA : but they act as if they do.Pathology lurks. Somehow the whole country has begun to pay dearly for the fact that Bolton, Bush and Cheney were never the best or the brightest or the most beloved.