Outdoor production from Charlotte Shakespeare whips up a storm

Retirement is on the minds of Charlotte Shakespeare producers these days. Embarking on its seventh annual Festival on the Green Uptown, Charlotte Shakespeare has elected to stop using its other company moniker, Collaborative Arts Theatre. It's also presenting what is often thought to be Shakespeare's valedictory comedy, The Tempest. When the aging Prospero, preparing to leave his island, announces, "This rough magic I here abjure," he is presumably speaking for the Bard who created him.

At this key point in its evolution, Charlotte Shakespeare has brought in Matt Cosper to direct. Cosper assembles a nearly spotless cast, not the easiest task for a mendicant company, and he directs in a deceptively casual style that minimizes the shortcomings of outdoor theater craft.

Drawing on six years of institutional memory, Cosper deals deftly with the vagaries of the Green, providing for the onset of the winds if not the rain. Scenic design, responsible in the past for such quixotic notions as a gateway, has been banished. Everything that appears before us is as solid and massive as a steamer trunk.

Instead of indulging in the fripperies of the royal courts of 17th century Milan and Naples, costume designer Caroline Bower has been authorized to drape the august visitors to Prospero's island in casual summer wear. When the enchanted music of the island turns out to be Harry Belafonte's recording of "The Banana Boat Song," the spellbound Milanese and Neopolitans are appropriately dressed to jam to it.

Yes, this is a modernized version. Attempts by Prospero's usurping brother Antonio to get cell phone reception upon his arrival leave no doubt. Additional electronics failures would be welcome as the visiting royals and their servants acclimated themselves further to the primitive surroundings. But somehow Ariel is magically plugged in, so unlike many modernization concepts, Cosper's isn't thoughtlessly discarded once the time and scene have been reset. 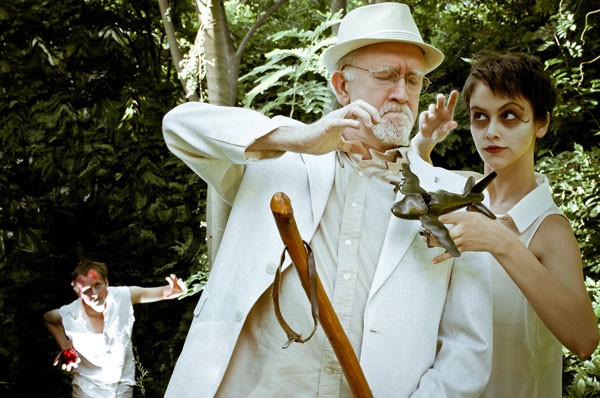 Ariel and her magic aren't quite the lily-white pranks we're used to. There's a blackened gothic aspect to Karina Roberts-Caporino's eyes — and some sass in her step — as this Ariel receives Prospero's vengeful directives. She often stands behind a soundboard, potting levers or twisting dials as she confounds Prospero's nemeses, as much a deejay as a fairy.

Cosper has also worked a sea-change on Shakespeare's genders. We aren't subjected to watching Prospero bless the union of Miranda and Martha in Amendment One-land. We still have Ferdinand (Daniel O'Sullivan) as the monarch of Naples' son wooing the dazzled Miranda (Greta Marie Zandstra), but now it's the Queen of Naples bemoaning the loss of her heir. Alonsa (Andrea King) has replaced Alonso, Sebastian (Laura Kendrick) is now the Queen's sister, while her sage councilor is Gonzala (Teresa Hopson) instead of Gonzalo.

Until Jonathan Ray gets a surer grasp of his lines as Prospero, Roberts-Caporino will continue to upstage him and carry the show. The comedy and drama are also in better hands. Peter Smeal and Scott Miller mesh beautifully as the drunken Trinculo-and-Stephano comedy team, while Jonathan Slaughter as Caliban is as primal and repellent as his Gilligan's Island garb allows. Even if the script doesn't quite make him a genuine threat, Chaz Pofahl manages to manifest some malignity as Antonio, and Cosper's reorientation of Sebastian allows an element of sexual attraction to spice up their intrigue. Or it would if Kendrick occasionally enunciated clearly.

The Tempest is one of Shakespeare's shortest plays, but with 60 more lines, it would be longer than Macbeth. So the most amazing aspect of Cosper's work with this wondrous script is his ability to condense it into 85 minutes (plus intermission) without any glaring sacrifice of the poetry, the flavor and the magic.