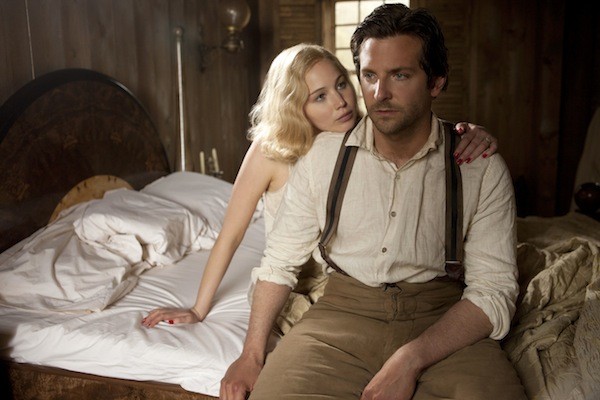 Regardless of its shortcomings — and, lo, they are abundant — Serena is a movie that absolutely deserved to be seen and screened in North Carolina. Not only is it set in the state (albeit filmed in the Czech Republic), it's based on the bestselling novel by Ron Rash, a native who's a professor at Western Carolina University. The poor reviews and nonexistent box office in limited release prevented Serena from ever going wide, so cheers to the board members of the Charlotte Film Society, who elected to bring the picture to town for a showing this Saturday (time is 7:30 p.m., location is Theatre Charlotte, and admission is $10; go to www.charlottefilmsociety.com for complete details).

It's just a shame the movie is so dismal. Rash's novel was highly acclaimed (including by former CL editor John Grooms; see his review linked here), but all the elements that made it such a literary beaut are apparently missing from the screen. What's on view is a poorly paced, indifferently acted drama about newlywed couple George and Serena Pemberton (Bradley Cooper and Jennifer Lawrence) and their efforts to create a timber empire in Depression-era North Carolina. Cooper and Lawrence are both excellent actors, and they've worked together in the past, in both Silver Linings Playbook (Oscar for her, nomination for him) and American Hustle (noms for both). But both are curiously miscast in this film. Cooper never projects the killer instinct or go-for-broke zest of an empire builder, while Lawrence, playing a role described by many book reviewers as an Appalachian Lady Macbeth, instead comes across like Joan Collins portraying a vapid vamp in a bad TV miniseries. Her progression from steely protofeminist to unhinged psycho occurs almost instantaneously, and Rhys Ifans' role as her murderous, psychically connected henchman makes little sense.

Serena reaches its risible zenith when George confronts a Carolina panther. No, it's not Cam Newton, but such an illogical cameo wouldn't have made the movie any more of a mess.