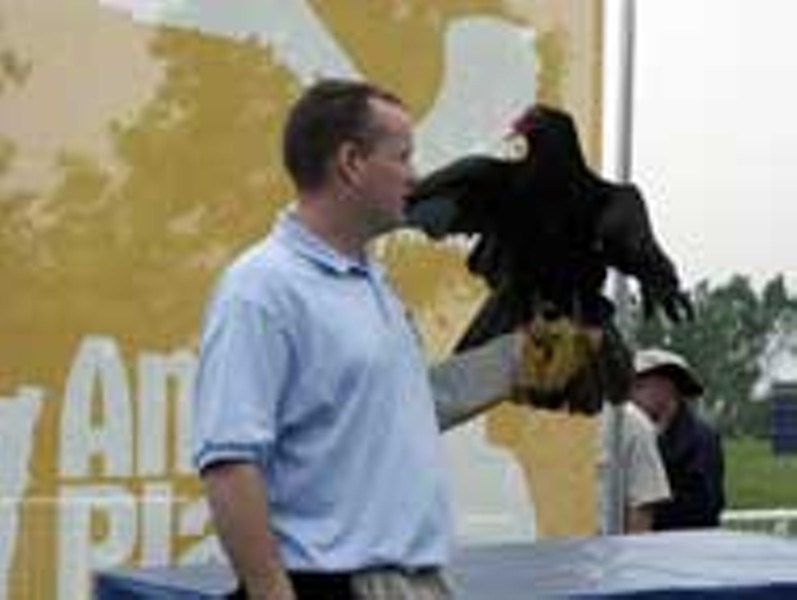 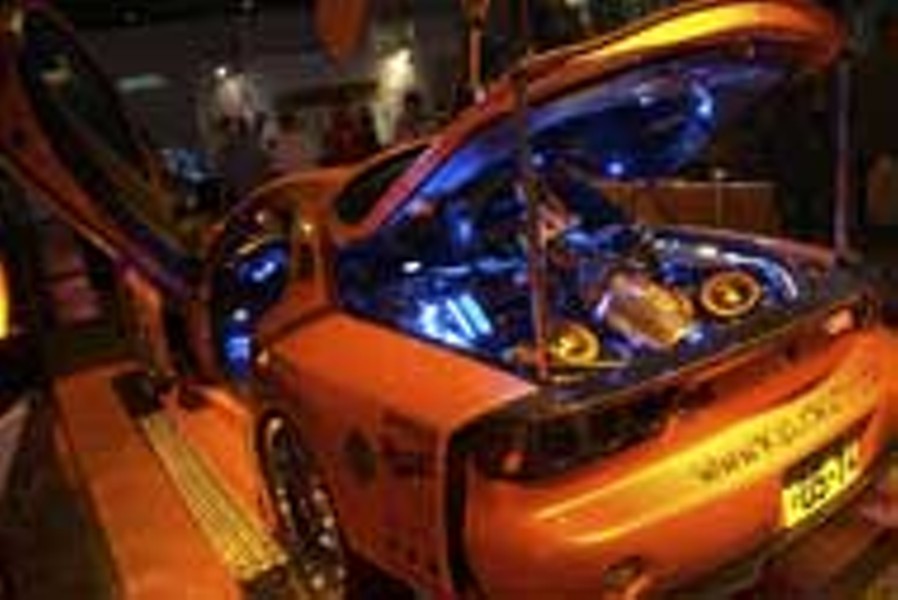 Cirque Dreams performances are Friday through Sunday at Blumenthal
April 20 - Wednesday
What do you play for an encore after you've just ripped through Bach's Violin Concerto #2 with the Charlotte Symphony Orchestra? If you're a full-grown prodigy such as Augustin Hadelich, you whip out a solo sonata by Bach, Bartok or Paganini. Hadelich, 22, has been concertizing since he was 7. Adding to the sense of occasion in Hadelich's CSO debut, maestro Christof Perick returns to the podium to conduct the last Neighborhood Concerts of the season. You can hear it all for the bargain general admission price of $15 at St. Matthew Catholic Church on 8015 Ballantyne Commons Parkway. The 8pm performances move to Duke Performance Hall at Davidson College on Thursday. Friday, they're uptown at First Baptist Church. Call 704-972-2000. (Tannenbaum)

Club Shows of Note: Guitarist/Singer/Songwriter extraordinaire Dave Alvin plays an intimate acoustic set at the Evening Muse...JuJu Stuhlbach and her Mosquitos get you ready for summer with some bossa nova-flavored indie pop...

April 21 - Thursday
One of the great short stories of the 20th Century reached Broadway at the end of the millennium as a Richard Nelson-Shaun Davey musical, James Joyce's The Dead nestled into the storied Belasco Theatre with a stellar cast headed by Christopher Walken. Nelson's book captured the Tony Award for the 1999-2000 season. For some, "The Dead" was as far as Joyce needed to go before penning the triptych of novels that have been the bane of graduate students ever since. The first chance for Charlotteans to see the final story of Dubliners onstage requires the briefest of excursions to Belmont Abbey College, where The Dead comes to life through April 30. Gabriel Conroy's memorable Christmas party begins nightly at 8pm in Haid Theatre, and general admission tickets are $10. Call 704-825-6787. (Tannenbaum)

Club Show of Note: The idiosyncratic rapper Cee-Lo does his Outcast Rapper thing at the Neighborhood Theatre.

April 22 - Friday
Aerialists, contortionists, and acrobats are spectacular enough under a big top. Squeeze them into an auditorium and you've got a high-tech take on a traditional one-ring European circus. Fueled by the success of Cirque du Soleil, Neil Goldberg scours Eurasia for additional circus artistry, choreographs and orchestrates the acts into a stage show, adds sunbursts of costumes and ultraviolet visuals, and tours the planet. Cirque Dreams brings Goldberg's latest extravaganza to Belk Theater for a three-day stand with evening shows at 8pm Friday and Saturday, 2pm matinees on Saturday and Sunday, and a getaway show at 7:30pm on Sunday. Tickets are $15-$45. Call 704-372-1000. (Tannenbaum)

Catch Them If You Can: An indie effort and an import are our recommended new-movie picks. Chrystal, written and directed by Georgia native Ray McKinnon, stars Billy Bob Thornton and McKinnon's wife Lisa Blount as an estranged couple still coming to grips with the death of their infant son two decades later. And Hong Kong's Kung Fu Hustle, from writer-director-star Stephen Chow, is a goofy martial arts romp. For reviews (and an interview with McKinnon), see this issue's Film section; for theaters and showtimes, go to the Moviefone link at charlotte.creativeloafing.com/flicks_toc.html. (Brunson)

April 23 - Saturday
Animal Planet Expo, a pet-friendly event packed with wildlife presentations, interactive exhibits, demonstrations and games, comes to Discovery Place today and tomorrow, including a special appearance by Animal Planet's Jim Boller. Admission to Animal Planet Expo is free and will be open to the public outside Discovery Place on Tryon St., between 6th and 7th Streets in Center City, from 10am to 4pm both days. Pets can hop in and out of swimming and watering holes if it gets too hot. There will be a number of animal-related activities inside Discovery Place as well. For more information call 704-372- 6261, ext. 300 or visit www.discoveryplace.org. (Shukla)

The Original Art & Soul of South End Block Party hits the streets of, where else, historic South End this weekend. This 4th annual event will feature the work of more than 100 artists in a variety of media including pottery, photography, paintings, hand-woven clothing and accessories, African-American artwork, handmade jewelry and stained glass, plus open studio tours and on-street demonstrations. The main stage, located at Camden Rd. and Park Ave., will showcase a range of music by local and regional bands. Admission is free and the area is open 10am-7pm today and tomorrow. For full details and maps visit, www.artandsoulofsouthend.com.

A little bit of Italy comes uptown as the Ciao, Italia! Festival returns to the Wachovia Atrium today from 11am to 7pm. Presented by the Christopher Columbus Italian Club of Charlotte, this annual event features abundant Italian food and mouth-watering pastries, wine- and cheese-tastings, and children's activities. Non-stop entertainment includes the Opera Carolina Chorus, the NW School of the Arts chamber group and dancers, the DiMuzio Brothers juggling act, and international pizza-toss champion Siler Chapman. At 2pm, award-winning author and chef Peter Reinhart of Johnson & Wales University demonstrates the art of making focaccia. Admission is $2, free for children under 12. The Wachovia Atrium is at 301 S. Tryon St., with parking available at the Wachovia Atrium Garage. For more info, call 704-614-3822 or visit www.italian-club-charlotte.org. (Vespa)

Dear Prudence: Good Morning, Good Morning. I Want to Tell You about the 2nd Annual Beatles Tribute Night the Evening Muse is throwing With a Little Help From My Friends tonight. What Goes On? Well, Girl, I've Got a Feeling that the Two of Us will Dig It when a host of local musicians — 36 and counting from Charlotte and Across the Universe — perform their favorite Fab Four tunes. So Run For Your Life Helter Skelter down the Long and Winding Road (or take Penny Lane) and Get Back to What Goes On because Tomorrow Never Knows when they'll do it again (probably a Long Long Long time from now). Anyway, I'm Looking Through You, Honey Pie, and You Won't See Me Nowhere, Man, except at this Magical Mystery Tour. For more of The Word, Think For Yourself or go to www.theeveningmuse.com. Ticket to Ride is $6. (Schacht)

Gasoline prices may be headed toward the $3/gallon mark but there's no sign of the American love affair with the automobile fading anytime soon. The XM Satellite Radio's Hot Import Nights brings some of the funkiest and high tech cars to Independence Blvd. this evening. One of the features of HIN is real-time voting, where show attendees will be able to vote for their favorite vehicle by text messaging their selection. This car competition includes the VIP Luxury section with the best in very pricey imports along with music, buxom models and more. Also, West Coast Customs will be bringing an Enzo Ferrari, Paris Hilton's Bentley GT, 50 Cent's Hummer H2, Xzibit's Chrysler 300M, and a Maybach Mercedes. Burn some gas and head on over to the Merchandise Mart 5pm-12am. For details visit www.hotimportnights.com or call 949-789-7439. (Shukla)

April 27 - Wednesday
The quartet of Jinx, Frankie, Sparky, and Smudge are snuffed out by a bus crammed with screaming teens on their way to see the Beatles on The Ed Sullivan Show. So ends the era of the Four Aces, the Four Lads, and the Hi-Los. But so also begins the kitschy memorial medley known as Forever Plaid, reprising "Love Is a Many-Splendored Thing," "Magic Moments," and a busload of other 50s hits. The Blumenthal PAC is co-producing the show with Pittsburgh Civic Light Opera at Spirit Square — and counting on the quality of the production to sustain a run until June 5. There's an extra flourish of style, too: cabaret tables for the first time ever at McGlohon Theatre. Ticket prices range from $30-$40 with starting times at 7:30pm Wednesdays and Thursdays, 8pm Fridays and Saturdays, and 6:30pm on Sundays. Weekend matinees begin at 4pm Saturday and 3pm Sunday. Call 704-372-1000. (Tannenbaum)