For this postmodern string band, what's past is never prologue 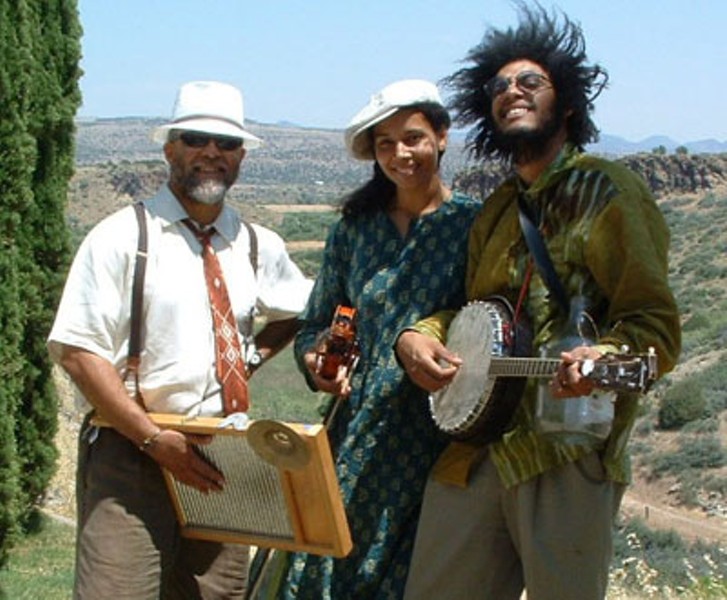 John Maeder Not just knee-deep in the bluegrass

To the Akan people of West Africa, "sankofa" is an essential life principle, deriving from an aphorism which translates as "go back and retrieve." Arizona's Sankofa Strings, a trio of African American artists who venerate self-made music, strive to embody this ancient Akan concept that (literally) there is nothing wrong with learning from hindsight.

Sankofa Strings -- multi-instrumentalists and vocalists Dom Flemons, Rhiannon Giddens, and Sule Greg Wilson -- accomplish their mission by harking back to the era before 20th century blues and pervasive electricity, when rural communities provided their own musical entertainment at myriad events from corn shuckings to funerals. Flemons is an Arizona native and Wilson hails from DC but Giddens, a product of the Carolina piedmont, should especially be primed to illuminate the linkages between forgotten African aesthetics of the black string band tradition and Celtic ones. Indeed, Giddens also honors the latter tradition, accompanied by her band Gaelwynd. Expressing another Akan saying -- Akyinakyin sen anyinanyin (the well traveled is more experienced than the elder who has stayed in one place all his/her life) -- Sankofa Strings are sonic rovers who view their sound as world music. With a repertoire spanning Africa, Europe and the Americas, they ain't lyin': string band standards, blues, hokum tunes, folk classics, sea chanties, Celtic ballads, and Afro-Pop hybrids are all up in their heady mix. At the Charlotte Folk Society's Gathering Concert & Jam this Friday night, expect to be dazzled by Flemons' slide banjo technique and the trio's use of fiddles, bones, drums, jugs, etc., as a spur to remembrance of peoples' individual power to create, as well as unity in song.

Sankofa Strings are playing with guests Lalenja Harrington and Justin Robinson at CPCC's Bryant Recital Hall in the Sloan-Morgan Bldg., on Oct. 14 at 7:30pm. This event is free and open to the public, donations are appreciated. Go to www.folksociety.org for more information.