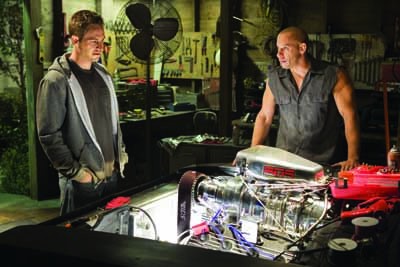 The best part of Fast & Furious (** out of four) is its tagline -- "New Model. Original Parts." -- which means that the studio wonk who created it deserves the big bucks more than anybody who actually appears in the film. It's a catchy line because it advertises the fact that all four stars of 2001's The Fast and the Furious -- Vin Diesel, Paul Walker, Michelle Rodriguez and Jordana Brewster -- have reunited for this fourth entry in the series (only Walker appeared in 2003's 2 Fast 2 Furious, and all were AWOL for 2006's The Fast and the Furious: Tokyo Drift). Unfortunately, this is one star vehicle that seems permanently stuck in "reverse."

The best performer of the quartet, Rodriguez, disappears from the proceedings fairly early, as director Justin Lin and writer Chris Morgan apparently decided to make this even more of a Toys for Boys romp than its predecessors -- Brewster's character is, as before, an utter stiff, while the other women (occasionally seen making out with each other) are merely decorative props. That leaves more time for Diesel (as outlaw hot-rodder Dominic Toretto) and Walker (as lawman hot-rodder Brian O'Conner) to engage in competitive bouts of piston envy, each trying to prove to the other that only he has a crankshaft large enough to take down the drug kingpin responsible for the murder of a close friend.

The opening vehicular set-piece is a doozy, but subsequent racing sequences resemble nothing more than video game sessions. Diesel tries to recapture the brooding brand of charisma that made him a star earlier in the decade, but he seems to be losing his grip on that elusive quality. As for Walker, he's more boring than ever: His acting is so somnambular that even his car's steering wheel stands a better chance at grabbing an Oscar nomination.