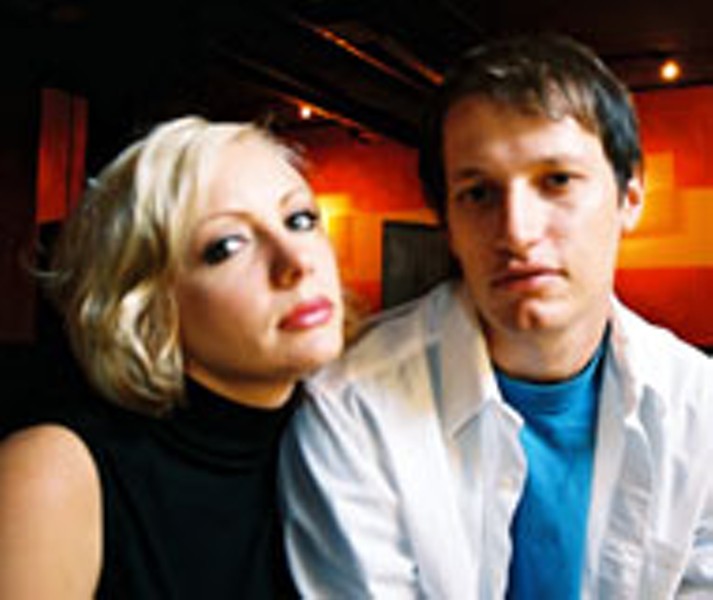 Ivan Howard and spouse Kelly Crisp form the backbone of the Rosebuds
Carolina indie pop is alive and well. After Don Dixon, Superchunk, Zen Frisbee, Archers of Loaf, now it's the Rosebuds turn. The "Buds are a trio, young, loud and sloppy, remaining true to their Triangle roots (they're from Raleigh). Think Imperial Teen, the (New Zealand) Bats, Velocity Girl, Yo La Tengo, Marshall Crenshaw, B52's, Modern Lovers, hell -- throw in some Weezer and the afore-mentioned Superchunk, too, though they don't sound exactly like any of them. Pop, rock, indie, punk, psychedelic, even doo-wop are among their ingredients. At first glance you might think they're the cheesiest, most simple-minded band in the pantheon of Carolina pop. But listen to the opening guitar strums, and what first appears cheesy is really unpretentious, carefree and vibrant, and what at first seems like naivete is really sly, frothy, infectious fun -- with an edge. What with hooks, catchy choruses and a post-Superchunk ethos, the listener gets sucked in instantaneously.

The Rosebuds are Ivan Howard, Kelly Crisp and Jonathan Bass. Ivan sings and plays guitar, and spouse Kelly plays keys and also sings. Jonathan is the drummer. According to Kelly, "Ivan and I write all the songs. Ivan writes most. We're usually a three-piece. We never have a bass. I generally play bass with my keys. But we're never confined by that. We're really mixed up. We sometimes have a lot of players onstage. The cast is always changing."

I spoke with Kelly while she and Ivan were moving to a new place in Raleigh. "It's an old rescue building, or a fire station or something." Both she and Ivan started the band. "Ivan was in a band but it broke up. He got a phone call asking him to have his band open at a local club. "All right, we're in a band,' he said. We started the band right there -- me, Ivan and an old drum machine. That day we worked up five songs. We played five songs that night. After we played, the other bands asked us to warm up for them, too. That was our first gig."

Kelly continues, "We had three goals when we started. We wanted to release a recording on (Chapel Hill/Superchunk record label) Merge. We wanted to record with producer Brian Paulson. And we wanted to be a touring band." In case you're unfamiliar with producer Paulson, he's responsible for recordings of Superchunk, Wilco, Beck and more. "His recordings were what we were shooting for." Kelly was particularly smitten by his recording of the Comas, "A band from here -- Raleigh. We were living in Wilmington at the time and were blown away by the quality of the recording itself. It has its own aesthetic."

The band's debut CD, The Rosebuds Make Out, seems at first to straddle that fine line between cutesy smarm and dynamic, but after a few listens it's clear the Buds err on the side of high-energy zing.

Making the recording, Kelly explains, "We went for beauty." The several mellow songs are exquisite in contrast to most loud bands' efforts, where quiet songs are frequent throwaways. Cuts like "Make Out," "Big Heartbreak" and "Wishes for Kisses" work surprisingly well.

Their CD emphasizes hooks, more hooks, handclaps and "woo-woo-woo's," "da-da-da's" and "yeah-yeah-yeah's." Catchy stuff, in other words. But sometimes the lyrics take on a life of their own. The song "Drunkard's Worst Nightmare," opens, "She's buck wild with her clothes off every night" and "she travels with her toothpaste in her bag."

The Buds early rock influences go all the way back to their childhood, as Kelly's description of their families' musical history attests. "We're both -- Ivan and myself -- from musical families. Our mothers both had crushes on the Beatles. We were exposed to Buddy Holly. Our song structures echo the time when music was really beautiful." Kelly also writes more than slightly inane and catchy lyrics, having written her Masters thesis on "The Case for Saturday Night Live: Its Impact on Politics and American Culture."

"I have a sketch comedy group, too," she adds.

Regarding the band's live approach, Kelly says flat out, "We're a ton better live. There's so much energy. The CDs don't capture our live energy." Just call it pop-rock bliss.

The Rosebuds play The Room this Friday beginning at 9pm with local heroes Pyramid opening.