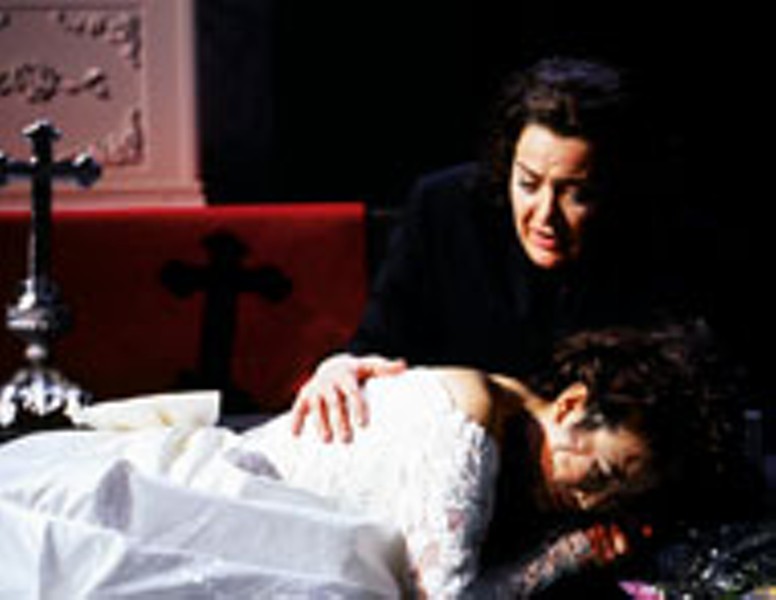 William Struhs I Capuleti e I Montecchi will run at Spoleto through June 13. Pictured: Hoo-Ryoung Hwang as Giulietta Capellio; Theodora Hanslowe as Romeo. 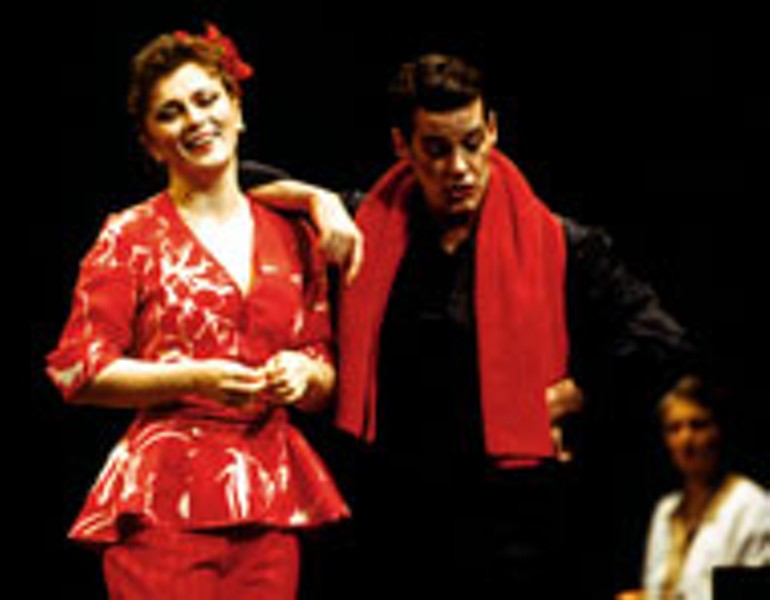 William Struhs Ariadne auf Naxos,directed by Charles Roubaud. Pictured (left to right): Lyubov Petrova as Zerbinetta; John Easterlin as The Dancing Master.
There's more than one way to gauge the success of a major arts festival. You can count the house, or you can read the reviews. But perhaps more than ever before, the artistic stature and financial stability of Spoleto Festival USA are allowing organizers to venture beyond the comfort zones of their subscribers and risk the displeasure of their critics.

It may be fair to say that, in proper moderation, Spoleto actually delights in challenging their audiences -- it embraces the idea that the Charleston festival must occasionally confound or offend the cultural pundits to succeed. Behind closed doors that have withstood the weathering of centuries, I imagine that the kingpins who put together Spoleto USA's 2004 lineup envision themselves in the close vicinity of a slippery slope that leads from satisfying the public to appeasing them. Far below lies the dim prospect of marginalizing themselves to musty museum status.

With DJ Spooky bringing his hip-hop edginess to Charleston -- and with the festival busting its traditional mold to accommodate an 18-hour Kunjo opera -- Spoleto has maintained a safe distance from the precipice of complacency. But with the mammoth Peony Pavilion, they may have unwittingly stepped into a PR/marketing cow-pie, if not a chasm.

Only the most loyal and dedicated festival-goers are likely to sit through even one three-hour opera presented without intermission, let alone six such ordeals over four days. That seems to be the proper postmortem for Peony's disappointing ticket sales.

What wasn't anticipated, however, was the wholesale dropout of regional and national print media. It's about the bottom line -- and the newsroom bobbleheads who wield the purse strings for arts coverage. You're basically asking a newspaper to send a correspondent to Charleston for four days to file one review or report -- on a cycle of performances that will only be repeated once. You have to really care about culture and opera to do that, and American newspapers mostly don't.

But if Spoleto USA's quixotic programming has cost the festival some adherents among subscribers and media outlets, the attachment of artists may be reaching its zenith -- perhaps because of the intrepid spirit reigning in Charleston.

Mikhail Baryshnikov's star turn in Forbidden Christmas was the most ballyhooed return to Spoleto but not necessarily the most propitious. America's first lady of the flute, Paula Robison, returned to the Bank of America chamber music series after a long absence, bringing renewed elegance and vitality to the lunchtime concerts. Likewise, famed violinist Joshua Bell returned to celebrate Charles Wadsworth's 75th birthday in a special concert.

The attractiveness of Spoleto USA to artists shows up in subtler ways. Comprimario roles in the Bellini opera I Capuleti e i Montecchi were on the same level as the finest CD recordings of the work. The choral and orchestral contributions were, if anything, even finer. Both the Westminster Choir and the Spoleto Festival Orchestra are selected in annual youth auditions, and the competition has become white-hot. As a result, there's now an astonishing level of instrumental and choral polish that infuses the Intermezzi series, the orchestral concerts, and the operas.

As usual, there's no shortage of high-concept productions all around the city to inspire the youth orchestra and chorus once they arrive at the festival -- and ensure that competition for next year's auditions will be just as intense. Here's the lowdown on the exciting fare that's still running in the final week of Spoleto, seen during the Memorial Day weekend:

Opera
Stage director Paul Curran has brilliantly transposed Vincenzo Bellini's I Capuleti e i Montecchi (The Capulets and the Montagues) to present day Verona, taking the traditionally elegant Capulet family that Romeo seeks to marry into and turning them into pistol-packing, cellphone-toting mafiosi. The transposition works far better than most modernizations I've seen of Shakespeare's tragedies, including all the Romeo & Juliets.

Pity is that Curran can't turn Romeo into a tenor. Instead, our Giulietta is adored by mezzo-soprano Theodora Hanslowe as the paragon of romance. If Hanslowe were the best singer in this strong cast -- or if she cut a handsome figure as Romeo -- we'd readily forgive this absurd cross-dressing in an instant.

I was won over by the beauty, the inventiveness, and the dramatic aptness of Bellini's music. All of the Capulets sang and acted superbly, beginning with the fervid yet delicate Hoo-Ryoung Hwang as Giulietta. Bass baritone Philip Cokorinos gave the Capulet chieftain a chilling richness that surpasses the acclaimed CD on sale in the Sottile Theatre lobby. And with tenor Jesus Garcia so handsomely portraying Giuletta's intended, Tebaldo, my wife Sue wondered why Giulietta would give Romeo a second look. Good point.

The lovers die at operatic length in the final scene, but their singing is heavenly. Bellini and his librettist tell the tale much differently than Shakespeare, and Curran's decadent touches add even more freshness. The Capulets' dinner, where Romeo offers peace between the families, has all the glassy excess of the Godfather films, and Giulietta's wedding reception sports a rock band (which we never hear)! The Spoleto Festival Orchestra, under the baton of Silvio Barbato, fills in magnificently.

Few pants roles have roused as much disdain from fellow composers as Bellini's Romeo of 1830, but the custom lived on afterwards, and the role of the composer in Richard Strauss's Ariadne auf Naxos is a felicitous modern example of the ancient phenomenon. We think he/she is the protagonist in Strauss's prologue when a fabulously wealthy, fabulously tasteless arts patron decrees that the composer's new Wagnerian opera and a commedia dell'arte piece must be performed simultaneously.

Sarah Castle endows the composer with a perfect blend of idealism, anxiety, and naivete, but the composer vanishes as soon as the curtain rises on Naxos -- an unfortunate byproduct of Strauss's messy collaboration with Austrian dramatist Hugo von Hoffmansthal. Strauss was primarily interested in Zerbinetta, the seductive leading lady in the commedia troupe while Hoffmansthal wished to extol the prima donna's sufferings as the abandoned Ariadne.

Lyubov Petrova and Gwynne Geyer are beautifully cast in the contrasting soprano roles. Petrova, returning on the heels of her triumphant Lakme last year, has all the allure and lithesome coloratura to make Zerbinetta truly captivating, and Geyer has all the Wagnerian heft to enable us to surrender to the opera's mythic pretensions. Sets by Jean-Noel Lavesvre fall far short of the requisite opulence, but costume designer Katia Duflot and stage director Charles Roubaud are nicely attuned to the comedy.

Theater
Many of us who went to last year's Battle of Stalingrad expecting a powerful statement on the horrors of war from playwright/designer Rezo Gabriadze were fairly cautious about expecting much from Forbidden Christmas, or The Doctor and the Patient -- and fairly worried about what Baryshnikov had gotten himself into. Stalingrad was a curious concoction of mesmerizing puppetry, nearly as dull as it was precious, so obscure that it was permanently fogbound.

But if Stalingrad never fulfilled its pretensions taking us back to Russia and brooding over the peak horrors of World War 2, Doctor is a beautifully realized parable on the persistence of faith under the repression of Communism. Better still, the role of Chito (the patient) is perfectly tailored to Baryshnikov's skills.

Once again, Gabriadze's paradigm is a heroically absurd odyssey. This time the knight errant is an aging doctor (played with just a touch of Scroogian crustiness by Jon DeVries) who would rather crash in bed on Christmas Eve after responding to a string of emergencies. But he finds himself roused by a madman whose chief claim to fame is his fervent belief that he's a car.

Against his better judgment, the doctor follows Chito on a long journey to minister to his ailing child, attempting to cure the crackpot of his delusion as they travel. I'll leave it to you to discover whether or not he finds and/or cures the child. What's important is to point out that following Chito on a winter's night in the Soviet Republic of Georgia is the sort of act of faith that the Russian regime tried for the better part of a century to extinguish. Christ is unmentionable to the telephone lineman (half puppet and half Luis Perez) whom we meet along the way as he's sneaking a holiday greeting to his wife -- and Christ is totally unknown to Chito until the doctor enlightens him.

Gabriadze also explores the question of whether it's advisable to cure Chito of his comforting car delusion. But it's the unique manner of the storytelling, using puppets and other forms of obvious illusion that enriches the experience. The collaboration with Baryshnikov yields a patient with a Chaplinesque blend of comedy and grace -- magically dusted with a Peter Pan charm. Misha seems to recapture his youth conjuring up Chito's car, vibrating intensely with ignition and skidding merrily to halt.

If Chito sounds unexpectedly Spanish for the name of a Georgian peasant, Gabriadze's sound collage is likewise tinted with the heat of Iberia. Doctor is also a love story, one that courts the parallels between love and faith, with Pilar Witherspoon and Yvonne Woods completing the delightful cast. Baryshnikov is slated to bring his new role to San Francisco and Barcelona in the coming months. He's coming in a wonderful vehicle.