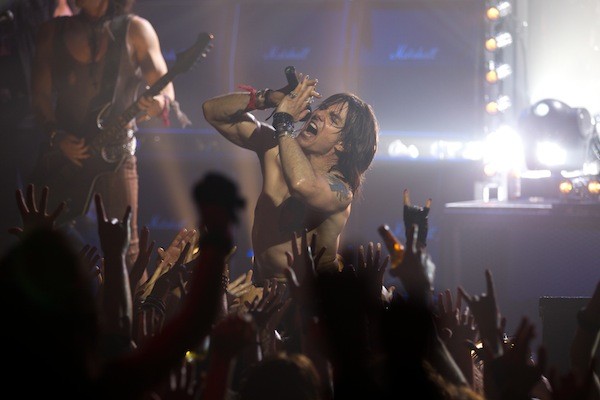 As someone who came of age in the 1980s, I'm forever coming to the defense of the music of that period, using classic tunes by the likes of (among many) Bruce Springsteen, Prince, Talking Heads and the criminally underrated (except by serious rock critics, thankfully) Cyndi Lauper as weapons in my defense. But then along comes something like Rock of Ages, which, aside from a little Joan Jett here, a lot of Def Leppard there, plays right into the hands of 80s detractors by showcasing the low-rent likes of REO Speedwagon, Poison and — seriously, folks? — Journey. Heck, why not rub some Lionel Ritchie mediocrity or Phil Collins' "Sussudio" (the worst song of the decade, no question) into the wound while they're at it?

Based on the popular Broadway show, Rock of Ages isn't good enough to recommend and isn't bad enough to qualify as a worthwhile guilty pleasure. Instead, it's a sanitized pop show that makes rock & roll seem about as raw, reckless and dangerous as a class of kindergartners singing "Itsy Bitsy Spider." If real rock were as toothless as what's presented here, Tipper Gore would never have bothered to launch her Holy Crusade back circa the time of the film's 1987 setting.

Al's wife can be spotted in Rock of Ages, in spirit if not actual presence. There's a Tipper surrogate in the form of Patricia Whitmore (Catherine Zeta-Jones), the conservative wife of the Los Angeles mayor (Bryan Cranston) who's determined to use their combined political clout to clean up the city. She plans to start with the Bourbon Room, a struggling nightclub owned by Dennis Dupree (Alec Baldwin). The Bourbon Room will close if Dennis can't come up with a lot of cash fast, and he pins all his hopes on an appearance by Stacee Jaxx (Tom Cruise), a perpetually wasted rock star who pals around with a monkey named Hey Man and stresses out his oily manager (Paul Giamatti) to no end. Stacee Jaxx treats everyone like dirt, a character flaw which doesn't go unnoticed by a Rolling Stone reporter (Malin Akerman) who nevertheless finds herself attracted to this bad-boy rocker.

All this activity on screen, and none of it even represents the central plot line. No, that would be reserved for the incredibly banal story about Sherrie Christian (Julianne Hough), a small-town girl who arrives in LA seeking fame and fortune. She instead finds Drew (Diego Boneta), a nice guy who's working at the Bourbon Room but hopes to break out some day to taste his own slice of the fame & fortune pie. It's all so very trite, mawkish and dull, and neither Hough nor Boneta can muster up anything resembling screen presence.

Some of the veterans don't fare much better. Zeta-Jones, so engaging in her Oscar-winning Chicago turn, looks uncomfortable lurching her way through musical numbers set to Pat Benatar's "Hit Me with Your Best Shot" and Twisted Sister's "We're Not Gonna Take It." Russell Brand is largely wasted as Dennis' right-hand man, while Baldwin sings about as well as I figure skate. Others, like Giamatti and Akerman, fare better, although Hall of Fame honors clearly go to Cruise for his radical performance. Boozy and bilious, he's the only one who admirably wallows in the mire, and it's no coincidence that his renditions (both opposite Akerman's journalist) of Bon Jovi's "Wanted Dead or Alive" and Foreigner's "I Want to Know What Love Is" are the film's best numbers. They pump up the volume as desired; the rest of the time, the movie suggests that, in this instance anyway, rock & roll is noise pollution.