Rise for Dawn of the Planet of the Apes

DAWN OF THE PLANET OF THE APES
***1/2
DIRECTED BY Matt Reeves
STARS Andy Serkis, Jason Clarke 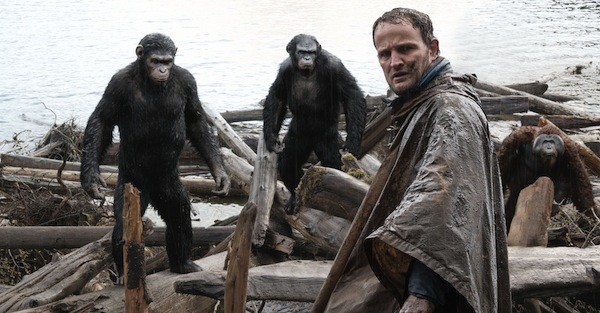 I gotta confess, I don't remember too much about 2011's Rise of the Planet of the Apes other than James Franco woos the Slumdog Millionaire's girlfriend and Draco Malfoy enjoys spanking monkeys. I do also recall not being quite as impressed as most everyone else with the latest addition to the Planet of the Apes canon: It was a decent picture to be sure, but it lacked the power and purpose of the classic 1968 original starring Charlton Heston. Dawn of the Planet of the Apes, on the other hand, isn't easily forgotten, ranking as the rare sequel that's markedly better than its predecessor.

Set approximately a decade after the conclusion of Rise, it finds an Earth whose human population has largely been eradicated, the result of a virus that had been accidentally released by scientists. The apes are thriving, though, and with Caesar (again played by Andy Serkis in a motion-capture performance) as their ruler, they continue to grow smarter and stronger. It's been years since they've seen any humans, but that changes when a band of them, led by the sensitive Malcolm (Zero Dark Thirty's Jason Clarke) and the sensible Ellie (Keri Russell), stumble into the apes' forest. Thus begins an uneasy alliance between the primate branches, with Malcolm and Caesar hoping to maintain peace, the human-hating simian Koba (Toby Kebbell) hoping to trigger a war, and the ape-wary Dreyfus (Gary Oldman) hoping that humankind will survive at all.

Since the film spends as much time with the apes as it does the humans, it's imperative that the CGI is up to snuff. No worries there: The effects are superb, and Serkis, Kebbell and the others who have to act through the barrier of technical wizardry convey as much emotion as those performers whose faces are front and center on the screen. This movie magic allows seamless interaction between human and ape, and this in turn informs the touching relationships between Malcolm and Caesar and between Malcolm's teenage son Alex (Kodi Smit-McPhee) and the scholarly orangutan Maurice (played by Karin Konoval and doubtless named after Maurice Evans, who portrayed Dr. Zaius in the '68 version). But the poignant moments usually don't last long, as an ample amount of suspense is generated over a powder-keg situation that could explode at any moment due to the machinations of Koba or the idiotic actions of Malcolm's teammate Carver (Kirk Acevedo). Director Matt Reeves does an exemplary job of working on the nerves, ensuring that audience members feel tense, tingly, taut and basically every which way but loose.