Review of Children's Theatre of Charlotte's The Best Christmas Pageant Ever: The Musical

So the holidays are here, and we all know the live entertainment drill: inevitable revivals of A Christmas Carol, Nutcracker, and The Best Christmas Pageant Ever plus a few fresh novelties to liven the mix. This year, one of the novelties is also one of the inevitables. For while it's possible to see the customary stage adaptation of Barbara Robinson's Yuletide favorite at Matthews Playhouse starting on Thursday, Children's Theatre of Charlotte unveiled the world premiere of The Best Christmas Pageant Ever: The Musical on Black Friday.

Robinson adapted her 1971 novel for the Seattle Children's Theatre in 1982, and the proliferation of productions across America has arguably made the playscript more beloved than the book. So the team of Jahnna Beecham and Malcolm Hillgartner, adding their lyrics and musical score, did the prudent thing in adapting Robinson's stage version.

Nearly 34 years to the day since the story succeeded in Seattle, a whole generation of parents who saw Best Christmas Pageant onstage as children are bringing their offspring to ImaginOn to see The Musical. Our Children's Theatre, which has grown to national renown during those intervening years, had to add five performances to the run before opening night — a tribute to their prestige as well as the bankable title.

Turns out that the Robinsons, the playwright (who died in 2013) and her daughters, were pretty prudent themselves in choosing Beecham and Hillgartner. They seem to know what can be enlarged to musical proportions and how to get the job done. I'd also say that Best Christmas Pageant is easier to swallow than A Christmas Carol was when it morphed into Scrooge.

Big crowd scenes can be magnified most easily from stage to musical dimensions, but A Christmas Carol doesn't really abound with them. Scrooge's workplace and Cratchit's home aren't bustling places, and London is a cold, lonely and forbidding city until Ebenezer's reformation. So a couple of parties and a funeral were supersized, effervesced and choreographed for Scrooge. We're also more familiar with the older, more entrenched Dickens tale, so tampering is riskier, more jarring.

Recognizing that they're primarily dealing with schoolkids, normal ones in fear of the notorious Herdmans, they make sure to create their biggest scenes when kids congregate, at church for Sunday school, at school during lunchtime, and at their rehearsal hall near the fateful church kitchen. The catastrophic rehearsal scene, causing Rev. Hopkins to cancel the pageant after the Herdman herd has stampeded it, is rockin' pandemonium.

Beecham and Hillgartner are more artful even before that in their depiction of the adult antagonists. What I labeled as the four Old Biddies, when Jill Bloede directed the play for Children's Theatre in 1995, are now three parents of Beth and Charlie Bradley's classmates. Luanne, Connie, and Betty start us off singing "Perfect Little Town," as beautifully harmonized and sugary as the overdubbing Connie Francis cooing "My Happiness." They are natural allies of the dictatorial Helen Armstrong, the rigid director who is usually in charge of the unchanging Christmas pageant year after year.

But Armstrong is hospitalized this year, so the vocal trio mobilizes with Helen to convince Grace Bradley, Beth and Charlie's mom, to take over just before auditions. In the play version, all four women wielded old-fashioned phones in cajoling Grace. A musical allows for more fanciful, comical liberties. By the end of another pop rocker, "Counting on You," the ladies have circled to the opposite side of McColl Family Theatre from Helen's bedside to resume their vocal trio assault on Grace at the Bradley home, with the siblings and their father joining in on the hubbub.

If the ladies can be more ridiculous now — a big if, since Bloede had Alan Poindexter and Sidney Horton crossdressing as two of the hags in '95 — then the Herdmans can be more fearsome and ferocious to counterbalance them. Augmenting their chaotic energy is the fiendish work of choreographer Ron Chisholm, who keeps the six Herdmans and their terrified victims spread across the stage in frenetic action. Even Rev. Hopkins must be convinced of their true menace.

We are far closer here to believing Beth's famed opening pronouncement: "The Herdmans were the worst kids in the whole history of the world." Where Bloede capitalized a bit on the fact that rather entertaining performances could come from kids who might be visibly reluctant to immerse themselves in the full barbarity of a Herdman, current Children's Theatre artistic director Adam Burke will have no such laxity.

As Imogene, the Herdman who takes the role of Virgin Mary by the throat, Carlyn Head is an absolute she-wolf in her howling vocals, and there is only the slightest glint of cuteness in Charli Head as Gladys, the little sister who pounces on the role of Herald Angel. With all of this vocal artillery hurled at her from young and old, Ashley Goodson can be sweet and caring as Grace, but when those moments arrive for reasserting control and conviction, she also unveils a voice of steel.

So when the Herdmans come around to the spirit of the Nativity, Grace is a little more amazing than she was in the play version, but I'm more thankful for the fulminating comic relief from Allison Snow Rhinehart, thwarted each time she issues a demand or insists that the Herdmans must be thrown out of the pageant. As phlegmatic as Rhinehart is, Tiffany Bear as Connie, Olivia Edge as Luanne and Tracie Frank as Luanne are purest plastic, aging Supremes wannabes.

Arella Flur is more than satisfying as Beth, but she's usually upstaged by Bennett Harris as the bullied younger brother or Ryann Losee as the tattletale Alice, who lets Imogene snatch the role of Mary from her without a struggle. Bobby Tyson's comic timing is so sharp in the minor role of Mr. Bradley that it's reassuring to see him get a duet with wife Grace late in the show, and Dan Brusnson is the kindliest, most Christian Rev. Hopkins that I can recall. Among the male Herdmans, Colin Samole as Ralph and Rixey Terry as Leroy impressed me the most, but I don't think either is written fully enough.

At least not yet. Estimates of the running time that I've seen in the Children's Theatre press releases and in their program booklet have ranged from 60 minutes, approximately the length of their 1995 production, to 80 minutes in the current playbill. My clocking of the Sunday matinee at less than 67 minutes suggests that the piece I saw underwent feverish modifications in its final weeks of rehearsal. 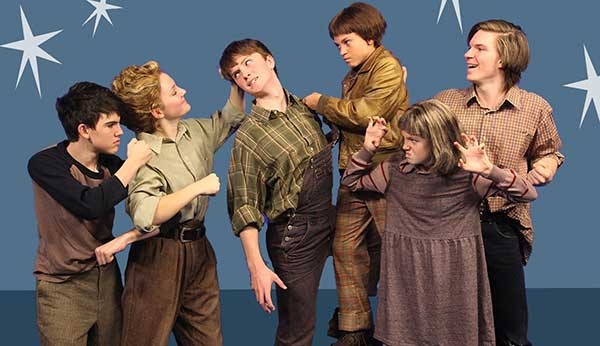 I point that out for a couple of reasons. It illustrates that Burke and Children's Theatre, who commissioned this world premiere, have taken significant ownership in intensively shaping the product. It also suggests to me that the process isn't finished, that the 80-minute target that seems more sensible to me might be what we see the next time The Best Christmas Pageant Ever: The Musical opens at ImaginOn. Or even by the time it closes on December 23.

Maybe then I'll be able to say that this is the best Best Christmas Pageant Ever ever. It's pretty damn close right now — and a very gratifying achievement at Charlotte's fantasy palace.