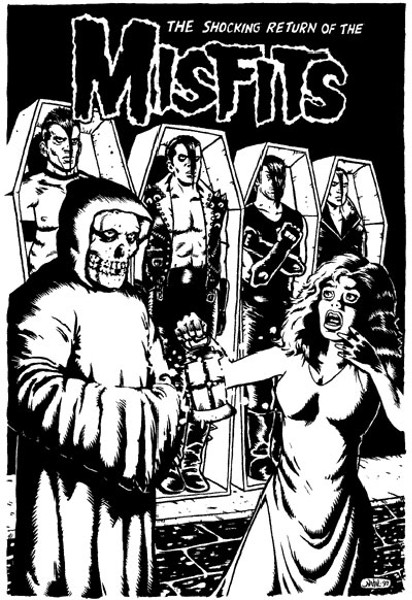 THE HORROR OF PUNK The Misfits

Marilyn Monroe is dead. That hasn't changed. But a series of resurrections have kept her tattered remains hanging around in various guises since her death in 1962. If you're thinking Marilyn Manson was the first to turn her into a ghoul, he was about 12 years too late. Glenn Danzig dug up her memory in 1977, naming his band after her last movie, The Misfits.

Though he took to wearing makeup, Danzig didn't look anything like Marilyn, nor did he try to. He didn't sound like her either. Danzig was a crooner, channeling Bobby Darin or the even rounder tones of operatic warblers like Mario Lanza.

The tones might have been smooth, but the subject matter and the music wasn't. Danzig was grafting horror movie/comic book lyrics onto punk. "I killed your baby today," Danzig leers in 1983's "Last Caress." "And it doesn't matter much to me/As long as it's dead/Sweet lovely death/I am waiting for your breath."

The band was horror-punked out from head-to-toe, with hair spit-curled into devil locks and a skull adapted from an old movie poster painted on their equipment and leather jackets.

"They were one of the first bands that had a fan club and really cool merchandise," says Greg Barbera, former music editor of Durham's defunct Spectator, who now leads the hardcore punk group Chest Pains (named after a Sudafed overdose he thought was a heart attack). "For being little punk-rock kids when you're 15, your little skull patch, skull sticker -- they branded themselves a long time ago, before people really thought about that shit as far as bands and punk rock."

But Steve Wensil, who performs as Stabb Frehley in Charlotte's punk outfit the Dead Kings, says the merchandise has gotten out of hand. "If I see another Misfits shirt I'm gonna commit suicide. How many Misfits tees can you see on people who probably never heard the band?"

Hearing the band was easy; getting close to the members during a show was downright dangerous. Though small in stature, Danzig was a rowdy who liked to brawl. His offstage demeanor was just as obnoxious. "I met Glenn one time, and he was a big dick," Wensil says. "He made me not even want to listen to his stuff at all." Before a show, Wensil asked about the name of the untitled track on Danzig 3. "He told me the name of the song," Wensil says. "And I said, 'What does that mean?' And he said, 'Go look it up in the goddam dictionary.' And he walked off."

By 1983, wanting more credit for his contributions, Glenn Danzig had walked away from the band to devote his time to Samhain, which evolved into Danzig. Though Misfits records continued to sell well, legal squabbles kept the remaining Misfits from performing until 1995, when bassist Jerry Only got the rights to use the name.

For many fans, the ride was over. "Glenn Danzig was the original singer, so it's not really the Misfits anymore as far as I'm concerned," Barbera says.

But for Wensil, the resurrected Misfits are what the true spirit of punk is all about. "The first time I ever saw the Misfits was back in mid '90s. It was the first time I ever saw a band of that caliber, where the main guy, Jerry Only, was out there helping the opening band set up their equipment. As soon as I saw that, I was like, these guys get it."

Some say what they got was inherited, a legacy from Glenn Danzig, and not much has been done creatively since he left. But with its big dog gone, the band got help from another one.

"If it wasn't for Metallica, a lot of people would have forgotten about the Misfits," Wensil says. "I'm one of the ones who went and bought Misfits records because I saw old James Hetfield wearing the shirt."

Barbera labels their last album, Earth A.D., as the first punk record to crossover to thrash or metal. "Metallica went on to cover some songs from that -- 'Green Hell,' and 'Last Caress.' So Metallica covering you, then you're being exposed to a whole 'nother world of metal thrash kids."

Those kids got a dose of old school punk as Only struggled to keep the band together; Black Flag guitarist Dez Cadena came in after brother Doyle left. Ramones drummer Marky Ramone was recruited for the 25th anniversary tour in 2002. But the all-star lineup didn't impress everybody. "When I saw 'em with Marky Ramone in High Point about a year ago, I just didn't think it was that well rehearsed," Wensil remembers. "It's not gonna stop me from going again, but it just seemed like it was real thrown together."

Ramone left in 2005, replaced by drummer ROBO, who had worked with the group from 1982-1983 and also played with Black Flag.

Some have criticized the group for its amateurish sound, but that doesn't bother Barbera. "Whether you're amateurish or not, if you pull it off, I don't care if you really can't play your instrument. If you're entertaining me, that's what I'm all about."

Although he categorizes last year's show as "really rough," Wensil has no problem with it. "Our singer got up on stage and did "Teenage Lobotomy" with 'em. They knew what it was, we knew what it was and even though it was sloppy, it was just fun."

And even if some of the songs and the performances are uneven, the music still stands up although the punkers are now chasing 50. But is it still cool to do it in your dotage?

"I'm 32. When I was 18, I said 'If I'm still playing music when I'm 32, I'll be embarrassed,'" Wensil says, laughing. "But I can't see stopping, so why should they? Whoever's in the band, if he can go out and make a buck and not be sitting at home watching American Chopper or something, more power to him."