After lockdowns in the spring pushed many independent restaurants to the brink, warmer weather and relaxed restrictions on capacity and alcohol sales allowed restaurants to find their footing and begin recouping their losses.

But with colder weather looming and the largest spikes in COVID-19 cases to date, restaurant owners face what could prove to be a difficult few months.

“COVID-19 cases are rising again, many businesses are running low on cash, they will lose some outdoor seating capacity to cold weather, and consumers themselves say they aren’t fully comfortable dining inside,” said Lynn Minges, president of the N.C. Restaurant and Lodging Association.

“If we don’t receive more support, looking forward, our industry is facing some serious challenges.”

The financial strain is evident in the applications by restaurant owners for government assistance.

On Nov. 10, Gov. Roy Cooper announced that a state Commerce Department program providing mortgage, rent and utility relief to certain businesses and nonprofits would extend its eligibility criteria to include full-service restaurants. Owners could apply for up to $20,000 per establishment with a cap of $40,000 total per business.

More than 1,300 restaurant applications were submitted that day, exceeding the estimated $24 million capacity that remained from the original $40 million in allocated funding.

Restaurant owners across the state have found that no single innovation or response is a silver bullet. Instead, they are creating patchwork solutions based on their unique business models and the behaviors of their clients.

For some restaurateurs, creating outdoor dining space has allowed for continued business. 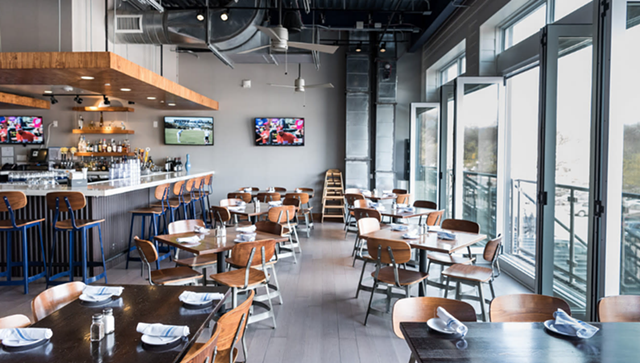 Jason Smith, chef and owner of the 18 Restaurant Group, which includes three eateries in the Triangle, observed differences in consumer behavior even between patrons at Raleigh’s Cantina 18 and patrons of his Durham establishment, Harvest 18, despite only 20 miles separating the locations.

Durham customers are much less willing to eat indoors while the indoor lunch crowd in Raleigh is surprisingly stable, he said, attributing the difference to the type of work done in each place. Many Durham customers work in the biotech industry, which has largely shifted online, while those working in construction, money management and law firms in Raleigh continue with in-person business.

To meet the demands of a diverse clientele, Smith says he plans to invest in outdoor heaters to attract his wary Durham residents during the winter.

In Raleigh, he plans to create a large outdoor awning setup — a project he has wanted to do for some time but finds especially important during the pandemic.

Some restaurateurs don’t have space for outdoor dining and have had to shift to takeout.

Chef Keith Rhodes and his co-owner and wife, Angela, operate their restaurant, Catch, in a Wilmington strip mall setting where outdoor dining is not an option. They closed during the initial lockdown and eventually shifted to takeout service.

“Many customers understand our limitations, but some will demand all the comfort of indoor dining and all the safety of outdoor dining,” Anderson said. “We can’t be all things for all people of all different levels of comfort, but restaurants are doing their best to accommodate as many people as they can.”

Anderson dined in a restaurant where the owner purchased two air purifiers for $10,000, she said. The science around the effectiveness of such systems is uncertain, but “I think that people are looking for any piece of security that’s out there … whether it really works or not,” she said.

AIR partnered with nonprofits Mountain BizWorks and Co-operate WNC to purchase more than 200 high-quality outdoor heaters to be used in downtown Asheville this winter.

A nationwide shortage of outdoor heaters, likely caused by a combination of supply chain disruptions, coincided with a spike in demand from businesses and individuals hoping to keep warm outside.

Even with a supply of outdoor heaters, Smith says he has been asking regulars to bundle up, plain and simple.

“In Paris, they don’t have much indoor seating, so you see people dress up warm and eat outside even in the winter,” he said.

Finding other sources of revenue

As colder weather threatens the relative stability that some restaurants have managed to achieve with outdoor seating, business owners are turning to new avenues to help them limp through the winter.

“The side hustle is very real for us in the next few months,” Smith said.

Many of these side projects are intended to fill gaps created by the pandemic. Smith’s kitchens will create “holiday feasts” to serve families looking for an alternative to their traditional dinner plans.

His kitchens are also partnering with other local businesses to cater small events and to create meal kits that can be purchased and gifted to substitute for typical holiday industry dinners.

One pandemic side hustle is quietly growing into what could be an industry-changing model: ghost kitchens.

“When we first started explaining it to people, we described ourselves as a virtual food hall,” said Becca Nelson, marketing director for Ghost Kitchen Eats, a new ghost kitchen in Chapel Hill. “With this model, we can have multiple restaurant brands with totally different menus all operating out of one kitchen.”

Restaurants with fully staffed full kitchens that saw a decrease in customers have turned to the internet to develop entirely digital storefronts, allowing owners to run multiple cuisines from a single kitchen.

The concept has existed since before the pandemic, but the widespread shift to delivery and pickup incentivizes more kitchens to adopt the model.

Ghost kitchens popping up throughout North Carolina, including in Chapel Hill, Raleigh, Charlotte, Asheville and Burlington.

“When we were first starting, there really weren’t any models to look to locally,” Nelson said. “We had to look to ghost kitchens around the country, people who were ahead of the curve.”

In some cases, a ghost kitchen is explicitly tied to an existing restaurant, allowing for well-known brands to expand their reach into new markets and providing regulars with multiple menus, which might encourage more frequent return customers.

It is increasingly popular, however, for ghost kitchens to remain completely anonymous, allowing the marketing and the food to speak for themselves.

“Our sales have already tripled since our soft opening in August,” Nelson said. “There is definitely a future for the model to grow in North Carolina.

The biggest hope for many restaurateurs is an economic stimulus from either the federal or state government — and their biggest fear is another lockdown. “January and February are already always the slowest months in a normal year,” Anderson said. “Now our biggest fear is another shutdown. That will hurt a lot.”

“A lot of coastal restaurants that did not make the summer profits we rely on to carry us through these slow winters, they are weighing some frightening options,” Rhodes said.

“Do we try to make it through the winter, or do we need to stop things now so that we at least have something to live off of? I’m confident Catch will be around in the spring, but I’m worried for a lot of these businesses.

”Rhodes said he hopes for a refocus on providing stimulus to the restaurant industry, similar to what was passed earlier in the year for airlines.