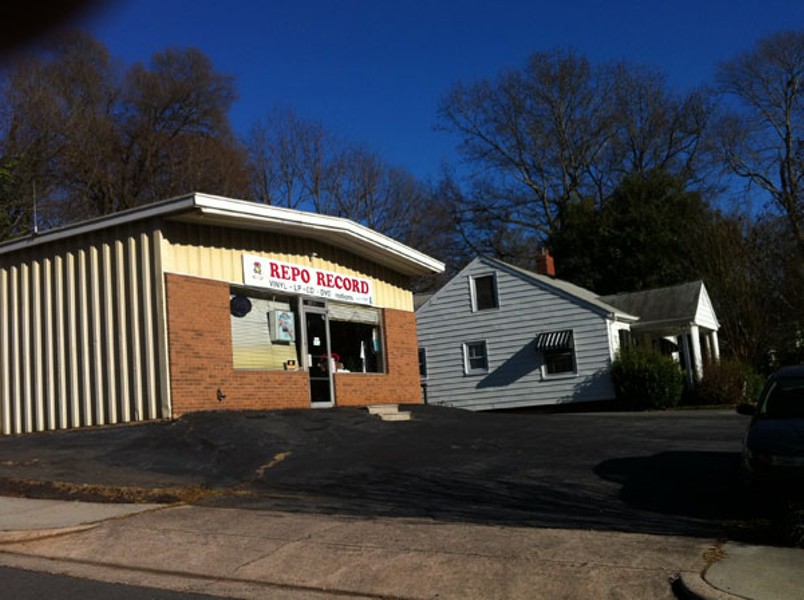 Jimmy Parker remembers the first record he ever bought. "It was Bob Dylan's Blonde on Blonde, but the record that really got me hooked was the Allman Brothers' Live at the Fillmore East. The Allmans pointed me to soul music and now I'm crazy for Motown."

We're in the latest incarnation of Parker's record fever, the newly opened Repo Record at 3325 Commonwealth Ave. Parker owned and operated the Plaza Midwood landmark, Repo Records, from 1988 to 2005, and for most of that time he ruled the independent record/CD store roost. With an unaffiliated Repo Records now open in Philadelphia and Germany, Parker decided to drop the 's' on his new business.

Parker's history in the business goes back to 1972, when he started working for record distributors. Drawing on his experience and his music collection, he opened Repo Records in 1988. By the early '90s, Parker had expanded to three Repos: the main store at 2516 Central Ave., plus Repo Cheapo across the street and Repo CDs on Tyvola Road.

When music retail hit the brakes in the '90s, Parker consolidated his satellite stores into one location on South Boulevard. Yet consolidation wasn't the reason Parker closed his doors in 2005. "Gas went up, taking away the disposable income people had to spend on an album," Parker explains, noting that his daily totals dropped as downloads cut into business.

He took a break to raise his daughter. Yet it was Parker's 11-year-old daughter who nudged him back into the business. "I asked her, 'Are you going to listen to these Jethro Tull records?' She's really into what the teens listen to now, so she said no."

Once again, Parker drew on his collection to stock a store. "It's used, but I have a lot of sealed copies that have never been played. And I'm buying reissues of the good stuff from the '60s and '70s like the Stooges and the Ramones." In addition to records and CDs, Repo carries stereo equipment, collectibles, T-shirts and vintage posters.

It's afternoon and the store is filling with customers. James Campbell flips through the stacks while his great-nephew, Kenneth Miller, clutches a pressing of Eagles Live. "I used to come to the store on Central," Campbell says. "I'm a record freak, and Repo was instrumental in helping me build my collection."

In contrast, Jen Crickenberger has never heard of Repo. "I live right down the street and I'm excited that there's a record store here in our neighborhood," Crickenberger says with a smile. "That's what brought me in."

Both Crickenberger and Campbell touch on the appeal of a brick and mortar store in the digital download age, what Parker calls "the romance of the record store."

"You can sit there and flip through the Internet," says Parker, noting that Repo's Twitter account as well as its website, reporecord.com, will soon go live, "but it's not the same as holding a CD or record in your hand."

"It's also a social thing. You meet people with similar interests. If two people like David Bowie, and they're in the same section, they can ask each other 'What's your favorite Bowie record?' Before you know it, they're best friends."