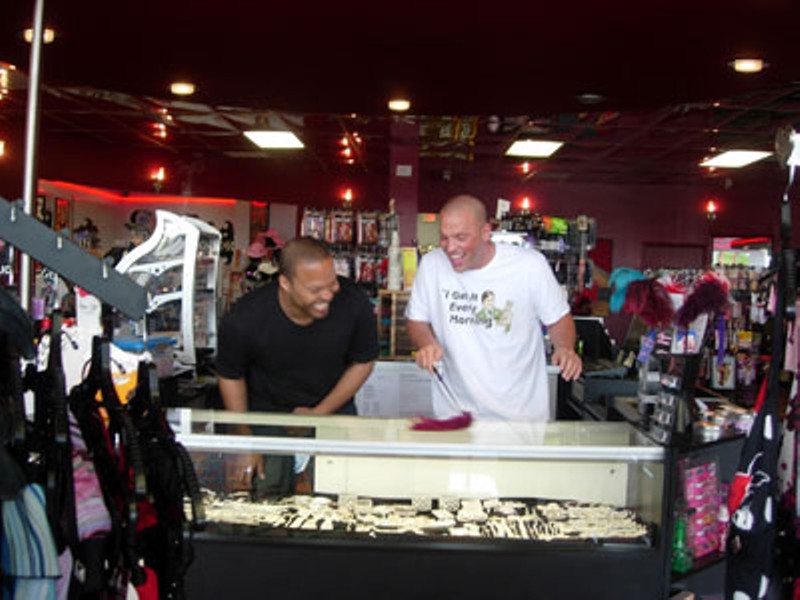 Jared Neumark Eric McCoy (right) demonstrates to employee Navan Snell the many uses of a sex toy, dusting a countertop at the Red Door with a tickling device

The cute, freckled woman doesn't look like the other single women who came into the Red Door before her. Her hair isn't bleached blonde and no part of her bosom is exposed. (Many of Red Door's regulars work for the neighboring establishment: The Gentleman's Club.) Despite the fact that I'm working the Saturday night shift at an adult store (7pm to 3am), I'm still shocked by her words.

I look to Joffe for guidance. "Well, help the woman," he says.

I take her to the toy section and quickly browse the shelves, pull one out and hand it to her.

"That's not big enough," she says. Then we both spot one that could double as a baseball bat. She picks it up. "Thanks. You've been really helpful," she says.

As we make our way back to the counter, I feel the need to break the silence with some small talk. But only one thing comes to my mind: "Is this a gift or for personal use?"

Turns out I was Punk'd. The young lady is owner McCoy's girlfriend, and they all break into laughter when Joffe rings up the toy. I can now empathize with the horrible humiliation Ashton Kutcher puts his celebrity friends through.

"I don't drink, smoke or cuss," says McCoy. He isn't lying. When I ask if he ever uses his store's products, he blushes and begins to stammer.

McCoy studies business models and image branding, and he has spent hours researching and engineering his online store compliment. He drinks five Red Bulls a day to stay energized for 19-hour work days.

For his employees, McCoy authored a 100-page-plus illustrated manual he calls the "little red book," to provide sexual education among other things.

"I can't really see myself getting something for my mom here," I say to Joffe after being shown an inflatable sheep that actually has orifices.

"I guess someone's baby's daddy could be buying a gift for the baby mamma," reasons Joffe.

Despite the low traffic, a few seedy things do occur. For obvious reasons, Joffe usually doesn't let customers (especially men) use the restroom. Feeling generous, though, he lets one skeezy guy use the facilities. The man emerges from the loo and promptly announces the toilet has erupted.

One regular customer comes in and just buys a card with a red heart on it. "Right now I'm only at phase one," he says. "Maybe next week I'll be buying a Rabbit." (The Rabbit is not an actual bunny ­-- but a freakishly powerful sex toy.) On two separate occasions, edible panty shoppers decide after being rung up with the high-end $11 chocolate ones to downgrade to the $4 cotton candy-flavored kind.

Edible panties sell OK, but the highest selling items at the store are batteries -- the Red Door sells 760 packs a month -- and a male performance-enhancement drug called Vigor (in a good month the place sells 2,400 pills; a 3-pack goes for $24). Joffe sells 10 bottles during my shift at the store and explains to one customer that Vigor is "a horny pill" that allows you to regenerate your libido after it's been expended. Near the back, in the shoe section, a stripper wearing a bottle's worth of patchouli overhears the pitch. "The only pill you need for that is MDMA," she says. "You know what I'm talking about?"

"No," says Joffe curtly, hoping to dismiss the comment.

As you may have guessed, strippers prove to be the most entertaining clientele. After tanning, another stripper begins shopping for replica female genitalia toys. "It's for my ex-boyfriend. He doesn't get that we're broke up. It's so he'll quit trying to make me his booty call."

One 18-year-old girl says she will be stripping for her first time later that night. She has come to the Red Door to purchase her very first stripper outfit and pair of stilettos. (All together now ... "awww."). The size sevens are a little tight so Joffe offers a tip.

"Take a hair dryer, turn it on and heat this plastic part for about three seconds. You do it for longer than that and you're going to ruin it. Then slip your foot in and it will mold right to your foot."