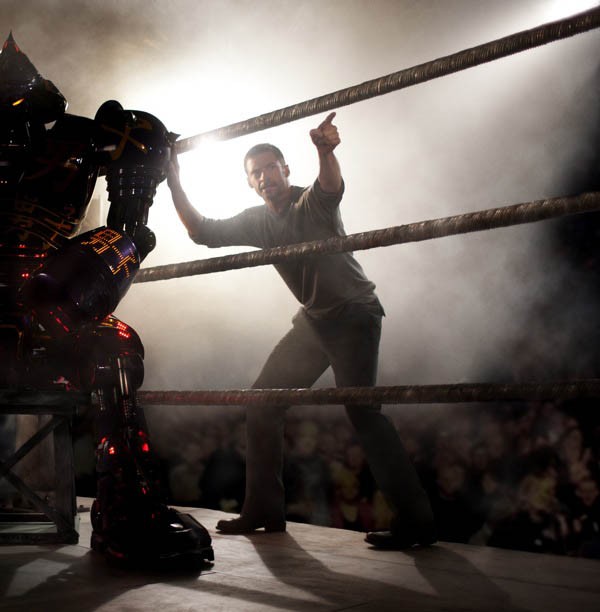 Not nearly as awful as its premise and previews might lead one to believe — hey, how's that for a ringing endorsement? — Real Steel should prove to be a modest surprise to those who had been expecting nothing more than a Transformers-style blend of CGI cacophony and callow characterizations.

Although loosely based on a Richard Matheson story ("Steel") that was previously dramatized in a 1963 episode of The Twilight Zone starring Lee Marvin, Real Steel has been described in some quarters as Rock'em Sock'em Robots: The Movie and in others as an update of 1987's Over the Top, the dreadful Sylvester Stallone vehicle about a wash-up who travels the country entering arm-wrestling competitions while trying to bond with his estranged son. Neither viewpoint is exactly a stretch, but Real Steel has a Weapon X in Hugh Jackman, who delivers a rousing performance as Charlie Kenton, a former fighter who's now reduced to promoting robot boxers on the underground circuit (in the film's near-future setting, all boxing matches are between robots, not humans). Charlie is surprised to learn he has a young son, Max (Dakota Goyo), but the kid proves to be an asset as Charlie tries to move up in the sports world.

Whether it's the chemistry between Jackman and Goyo (who may look like The Phantom Menace's Jake Lloyd but can act circles around the little Annakin) or the guiding hand of noted humanist filmmakers Steven Spielberg and Robert Zemeckis (both on hand as producers), Real Steel mines some real emotion out of its hopelessly clichéd father-son tale. As for the effects, they're excellent, effortlessly placing the computer-generated 'bots in real-world surroundings. Sincere but silly — I could have done without the cringe-worthy dance routines between boy and robot — Real Steel is a rocky version of the Rocky template, but it exhibits a beating heart under all that heavy metal.