By Any Means Necessary

A few months ago I was driving out of my hometown of Asheboro, on my way back to Charlotte after a weekend with my parents, when I saw a sign on the town's main drag reading, "Everything Hemp." It was a little shop tucked into a strip mall about halfway between my alma mater, Asheboro High School, and the old drive-in restaurant where my friends and I would sneak off to during lunch to get our munchies fix.

I had to laugh. My last name rhymes with hemp, and when I was in high school, that's what the students who were less inclined to partake of the weed would call me. My, how things have changed. The very word once used to disparage my friends and me was now a quaint shop that sells hemp-based oils and lotions, fabrics, foods and beverages.

Hemp was illegal for years because of its association with marijuana. Both are part of the cannabis family, and when the Marihuana Tax Act of 1937 made cannabis illegal, largely for racist reasons, the low-THC hemp — used to make rope and other fabrics — was dragged along with the higher-THC marijuana, which was smoked for relaxation.

In more recent years, laws banning even higher-THC cannabis have loosened, as marijuana's medical uses have increased and Americans have become more tolerant of its recreational use. In 2014, when President Obama signed the Federal Farm Bill, states were allowed to set up pilot programs to reintroduce hemp farming. That opened the floodgates for stores like Everything Hemp in Asheboro.

For our annual 4-20 issue — which acknowledges April 20 as International Weed Day — CL news editor Ryan Pitkin traveled to Asheville with two Charlotte entrepreneurs to check out the Carolina Hemp and Blue Ridge Hemp companies. Like Everything Hemp in Asheboro, those western N.C. businesses also traffic in hemp-based oils and other products, and the entrepreneurs Pitkin traveled with, Michael Sims and Dan Hentschke, would like to do the same thing here.

But Sims and Hentschke want to take things a step further. Their ultimate goal is legalization of all cannabis products in North Carolina. First, however, they plan to abide by current laws governing hemp, Sims told Pitkin, "so when we do have the opportunity to go legal [with marijuana], we can say, 'Hey look, we've been doing everything by the book legally for all these years, give us an opportunity to hopefully be part of the pilot program when that does change.'"

Meanwhile, the higher-THC cannabis, marijuana, remains illegal in N.C., so when we gathered several of Charlotte's finest rappers together for this issue's cover story about the upcoming New Era Music Festival, we had to roll up fake blunts for them to smoke. (OK, so we sorta played into the stereotype, but in a loving nod to Weed Day.) 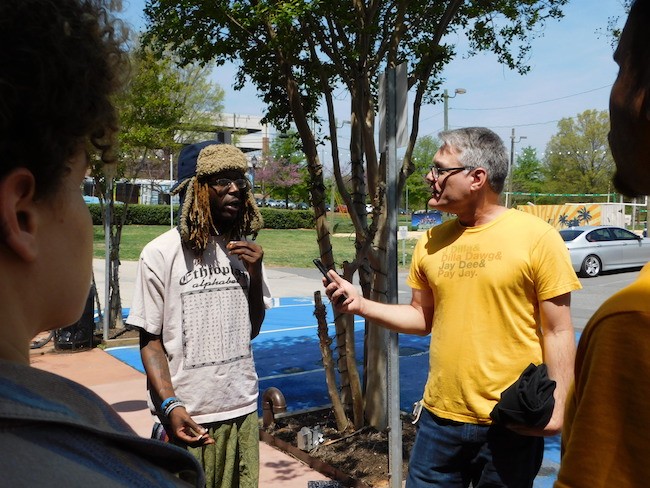 "Do you think it's safe for us to be ingesting this?" rapper Nige Hood asked when we handed him a catnip blunt to puff on for the cover shot. Yes, we told him, it's OK — just make like former President Bill Clinton and don't inhale.

The New Era Music Fest, which takes place April 21, is a celebration of local and regional hip-hop artists featuring a who's who of Queen City talent: Hood, Phaze Gawd, Black Linen, Bleu, Jah-Monte Ogbon, and many others, including the festival's brainchild, Xavier "Tizzy" Walker of the duo Th3 Higher.

When I was working on the story over the weekend, I couldn't quite get across the enormity of Tizzy's role in Charlotte's rich hip-hop scene. So I did what I often do in such cases: I tapped the extraordinary brain of my girlfriend Kia O. Moore, who's also a sometime CL contributor.

"And he has a lab, with big whiteboards in it, where he does his planning, and notebooks scrawled with ideas, right?"

"Like Charles Xavier — Professor X of X-Men," she said.

Yes! Xavier Walker is the Charles Xavier of Charlotte hip-hop — a colorful superhero out to bring truth, justice and peaceful coexistence to the local music scene. Shouts-out to Kia for transforming an ordinary report on a bunch of blunt-smoking rappers into a larger-than-life adventure story about a team of superheroes dedicated to busting stereotypes — led by one Professor X, whose guiding principle is, of course, "By any means necessary."

Watch the video for more on the New Era fest: