Rampage: Every which way but satisfying | Reviews | Creative Loafing Charlotte

Rampage: Every which way but satisfying 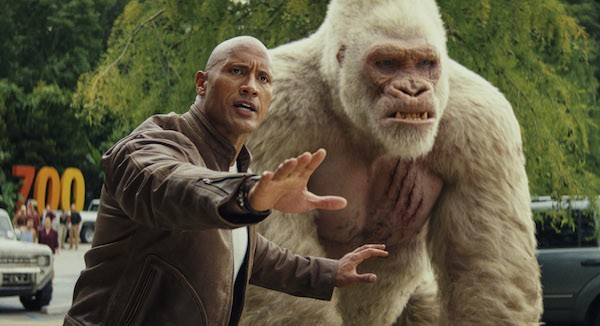 Critics have often been accused of unfairly dissing a movie because it’s not the one they imagined in their head, placing the finished product at a disadvantage for not satisfying any preconceived notions of where the story should have gone.

Perhaps there’s some validity in that charge. Take, for instance, the new Dwayne Johnson action spectacular Rampage. It’s based on a 1980s video game in which an enormous ape, an oversized wolf and a gigantic reptile wreak havoc on various American cities. A film version is naturally going to follow suit, but that nevertheless didn’t prevent me from wanting the filmmakers to retain the gorilla and axe the other critters. It wouldn’t have made for a very faithful movie, but it might have made for a more involving one.

That’s basically because the heart of this picture rests in the relationship between Davis Okoye (Johnson), a primatologist at the San Diego Wildlife Sanctuary, and George, an albino silverback gorilla who basically qualifies as the human-hating Davis’s BFF. Through some serious pilfering from Mighty Joe Young, the early sequences establish a nice rapport between Davis and George (Jason Liles is the actor under the motion-capture CGI), and watching these two pal around in the manner of Clint and Clyde in Every Which Way But Loose wouldn’t be the worse way to spend two hours (and like Clyde, George also has a predilection for flipping that middle finger).

Unfortunately for George, he’s exposed to a serum initially developed by Dr. Kate Caldwell (Naomie Harris) to aid humankind but nabbed by ruthless CEO Claire Wyden (Malin Ackerman) to sell as a biological weapon. The serum, which not only super-sizes its recipients but also triggers rage, ends up also infecting a wolf and an alligator. The three beastly behemoths then head to Chicago, with only Davis, Kate and a gregarious government agent (Jeffrey Dean Morgan, pouring a thick Southern accent onto his characterization as if it were syrup on pancakes) there to stop them from completely leveling the city.

As far as video-game adaptations go, Rampage is one of the better ones, although that of course isn’t really saying anything. An amusing gag or quip manages to occasionally stick the landing, but the plot particulars are rarely more developed than those found in, well, an arcade game. Johnson coasts on his charm, the talented Harris (superb in Moonlight) is largely wasted, and Ackerman is an interesting choice to play a villain (far less successful is Jake Lacy as her simple-minded brother and partner-in-crime). George is a magnificent visual effect, but the other monsters are rather ridiculous, and watching them demolish buildings (and each other) during the climax makes for a particularly protracted slog.

Rampage aspires to be dumb fun, and that’s fine – we can always use films of that nature. It’s just a shame the fun too often takes a backseat to the dumb.