R Creative Collective Uses Art as a Path to Healing

Creating a way out

For those who find it hard to wear their heart on their sleeve, sometimes it can help to wear it on their back for a morning, just to see how it fits.

That was the scene on a recent Saturday morning in a cafeteria at A Dove's Nest, an addiction treatment center for women in west Charlotte, when a group of about 20 women stirred about the room — slowly at first — each wearing a piece of purple construction paper on their back.

The idea was for the women to go around the room writing on each other's backs, expressing kind sentiments about one another that they might not otherwise have any reason to say. While still wearing the papers, the women were later assigned to write positive thoughts about themselves on smaller pieces of paper they could stick into a mason jar to take with them.

One woman loudly asked to whomever would listen, "What if I can't think of anything good to say about myself?"

Sara Jordan, a volunteer with R Creative Collective, jumped at the chance to explain.

"You use your table," Jordan replied, suggesting that a woman's tablemates could help them come up with positive thoughts. "One of the coolest things about recovery is that you're not alone anymore. You don't have to shoulder everything by yourself."

Throughout the exercise, Lauren Kestner, co-founder of R Creative Collective, sat back watching, sometimes distracted by her 2-year-old daughter, Greylyn, who also wore a small piece of construction paper on her back.

Since launching R Creative Collective — originally called Artist Recovery Movement — in 2016, Kestner has run or participated in countless workshops like the one at A Dove's Nest. While seemingly elementary, the exercise the women carried out that morning clearly helped the participants connect with one another and express thoughts that may have been buried deep during their time drinking or using. 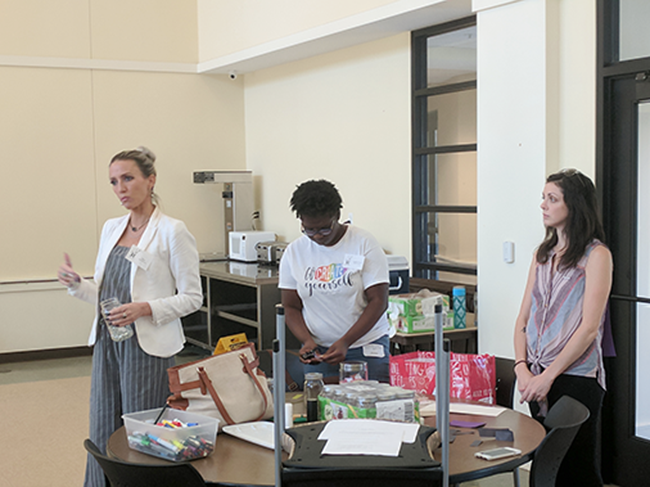 When the women finally removed the papers from their backs, gasps and appreciative sighs could be heard throughout the room. One woman stood and exclaimed, "I didn't really think y'all felt that way about me, but it really touched my heart."

As they wrapped up, a few women became interested in hearing the story behind RCC, an organization that uses the arts to help people in recovery from addiction or struggling with mental health, homelessness or any number of other issues.

Kestner stood and addressed the group, recalling how she had moved to Charlotte to live in a sober living home as she fought her addiction with alcohol and heroin. She didn't know anyone in the city, and was constantly turned away from the one passion that helped her cope: art.

"As someone in recovery who spent a lot of time in treatment and jails and hospitals, we don't get a lot of reprieve," said Kestner, an illustrator by trade. "So I was always really frustrated because I wanted to draw and I couldn't draw because they said I was distracting or trying to escape something that I needed to face.

"I understood that I needed to focus on my wellbeing and my health and my recovery, but I needed that. That was my program before I had a program; color and creativity and passion allowed me to survive some really, really dark places I was in over the course of my life. And that was what I wanted to offer to the community. And that was it. That was all I know. And here we are."

To be fair, there was a little work that went into it between then and now. After having the idea for ARM while "in a very meditative place" driving to a meeting one day while pregnant with Greylyn, Kestner shopped it around a bit.

She discussed the idea with other creatives in the recovery community, and eventually launched the organization with the help of co-founders Hillary Belk, J.R. Rocky and Chelsea Schmidt.

Two years later, the name is different, two of the founders have left to pursue other ambitions and Kestner has stepped down from her leading role, but the organization is as busy as ever. RCC currently runs workshops with treatment centers like A Dove's Nest and its counterpart for men called Rebound, both subsidiaries of Charlotte Rescue Mission, as well as The Blanchard Institute and On Ramp Resource Center at The Relatives. Volunteers also travel to Greensboro to run workshops at Fellowship, an alcohol and drug treatment center there.

Earlier this year, when Kestner took a full-time position with the Center for Prevention Services, volunteer Amber Irvin took over as executive director.

Irvin also works as a teacher at ALC Mosaic, an alternative learning center in east Charlotte. She uses her experience teaching abstract art and creative expression to kids ranging from 7 to 15 years old in her work with RCC, but she doesn't consider herself an artist.

"Everyone's creative in everyday life," she said. "We're creative in how we get to work, and what we're going to eat, and just how we're going to navigate the different pressures that we are having, so in that way, definitely, every day of my life I'm an artist. But don't trust me to draw a circle or a straight line."

Jordan can relate. While she doesn't consider herself an artist, per se, she said she has a passion for interior design, and that's how she expresses her creativity. Once she gets in the positive headspace that results from designing a room, she's more able to face the struggles that she still faces more than five years after getting sober.

The idea that it doesn't take an artist to use art as a healing process is an important message that RCC volunteers try to pass onto participants, as well.

"We walk into these workshops and people are like, 'Oh, I'm not creative,' and 'Oh, I don't know how to do this, and I don't do this and I don't do that,' but the truth is that art is in everything," said Kestner. "It takes vision to create anything and that's what we really try to drive home with these workshops is that you don't have to be able to draw or paint or sculpt something. You are creative and you have passion, it's just going to look different for everybody."

Irwin said it's those reluctant folks that Kestner described who usually get the most out of a workshop.

She described how she watches participants walk into a workshop only because it's part of a program they're a part of or because they might be bored with whatever else is going on in the building.

Time after time, it's the people who are most resistant to the workshop who come out feeling the most invigorated by it.

"No matter what it was — whether it was listening to music and talking about how it made you feel, painting or collaging — those are always the people that are like, 'I feel so much better. I didn't come into this thinking it was going to be anything. I thought I was just going to BS my way through it, but once I actually just did it, and just allowed myself to be, I feel so much better,'" Irwin said. "That's the thing that always sticks with me." 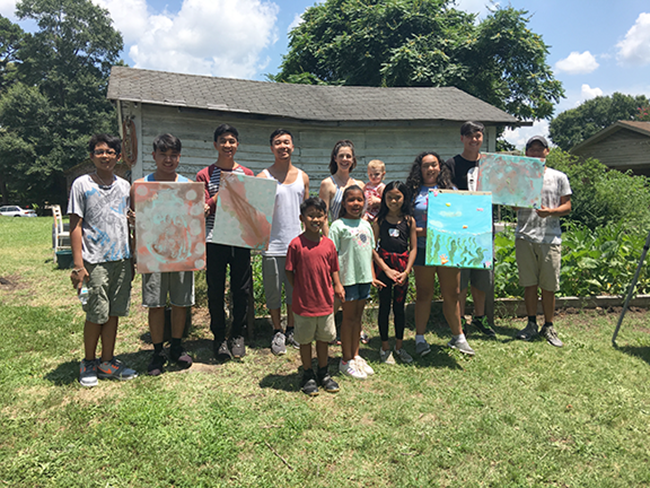 RCC workshops range from confidence-building exercises like the one recently held at A Dove's Nest to more artistic ventures.

One of Irwin's favorite exercises is called the "collaborative canvas," in which participants split into groups of three or four and paint on a canvas together for 10 to 15 minutes. At the end of that time, the groups rotate canvases and begin work, picking up where their neighbors had left off.

Of course, they can also just paint right over their neighbors' work, and participants have to come to terms with the fact that someone might be doing the same to the work they just left. Reminiscent of the exquisite corpse method, the activity can result in beautiful works of collaborative art, but it's also an exercise in letting go, said Irwin.

"You just spent 10 minutes working on this picture with your group, and now someone else can come along and completely change it," she said. "It's about what it feels like to let go of things, and not just hold so tightly to the idea of control."

Other exercises include music therapy, designing art around mantras — sometimes on pocket-sized canvases so that participants can bring them around in their daily lives — and intuitive painting. Sometimes, a volunteer will see a new activity on Pinterest and try it out with a new group.

Irvin said she noticed that even an activity as simple as finger painting can open up new avenues of expression and coping for participants who haven't considered the value of such a nostalgic exercise.

"You won't believe how many adults are like, 'This makes me feel childish, like a kid,' or, 'It takes me back, because putting my fingers in paint is something I was told not to do after 7,'" she said. "You just have to kind of let go of that simple wall, just put your finger in the paint and feel it and make it. It's amazing."

It's not just recovering addicts who benefit from the work of RCC. When the organization was called Artist Recovery Movement, the word "recovery" included in the title confused many would-be funders.

Kestner said that, in order to get grants, the organization would have to pigeonhole itself into a being a substance abuse program, a mental health program or some other thing that didn't define the broad range of people they wanted to reach.

It also chased away would-be participants.

"Some people were like, 'I don't want to have to necessarily identify with something to be a part of the club,'" Kestner said. "That's why we removed it. R now stands for recovery, or resilience, or rebirth, or renew. You name it, you can put whatever you want to it, and it's a collective because we want everybody to find their own voice."

For example, while Irwin said she has gone through "phases" of substance abuse, she said her main struggle is with managing her borderline personality disorder. Kestner and Jordan have both battled alcoholism, but Kestner has also dealt with mental health issues and heroin addiction, while Jordan is a survivor of domestic violence and breast cancer.

"There are so many facets; it's not as narrow as people try to make it," Jordan said. "Whatever you're healing from, that's recovery. It doesn't have to be a substance."

As the women filed out of the room at A Dove's Nest on that Saturday morning, mason jars full of praise in hand, many stopped by the volunteers' table to thank them, asking that they return and offering to help clean up.

After hundreds of workshops over the last two years, about 97 percent of participants have said they would "love to do this again," according to surveys that volunteers hand out after each workshop.

Despite those high numbers, Irwin remained realistic about the effects of her work.

"I'm not a therapist coming in to tell you that all you need to do is paint and your life will get better tomorrow," she said. "I'm a real person letting you know that this is something that I've enjoyed, that's helped me stay on the path of recovery, and maybe it will be helpful for you. There's no illusion that every single person that does every single workshop is going to be like 'Wow, my life is changed,' but 97 percent is pretty good."

You can't argue with that.