True Grit: Quick on the draw 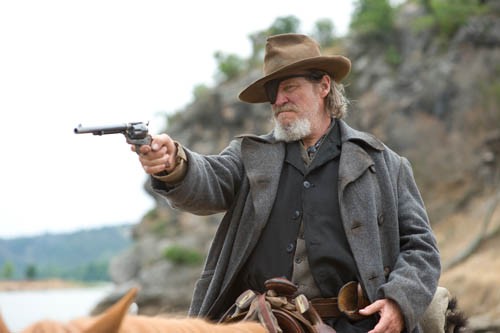 It's been well-documented that the Coen Brothers' take on True Grit isn't a remake of the 1969 film that won John Wayne his only Academy Award but rather a more faithful adaptation of Charles Portis' novel. That's all well and good, but when it comes to making that Netflix rental selection, the choice will be between the two film versions. By that token, no one will lose out, as both pictures are of comparable value. Forced to choose, I'd actually go with the Duke's at-bat, although Jeff Bridges is certainly more than capable in taking on the iconic role of boozy marshall Rooster Cogburn, hired by young Mattie Ross (Hailee Steinfeld) to track down the desperado (Josh Brolin) who murdered her pappy. Sporting a sly sense of humor different than what was brandished in the '69 model, this True Grit mines its colorful characters for off-kilter comedy, from talkative Texas Ranger LaBoeuf (Matt Damon) to scraggly outlaw leader Ned Pepper (Barry Pepper, superbly channeling the original's Robert Duvall). Bridges is likewise amusing and might have been even funnier if we could understand his frequently slurred dialogue. As it stands, whenever he's talking, the picture needs English-language subtitles as desperately as Bergman's Persona or Kurosawa's Seven Samurai.

(Matt Brunson releases his list of the 10 Best & 10 Worst Pictures of 2010. Go here to see the complete article, with write-ups and photos.)