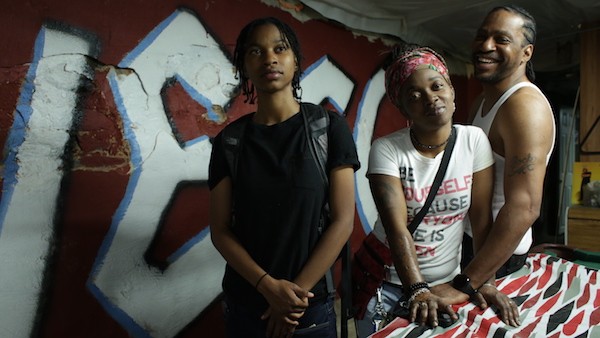 In the manner of the classic Hoop Dreams, director Jonathan Olshefski’s Quest looks at the triumphs and travails of a lower-class black family over the course of several years. And like many other documentaries (The Queen of Versailles springs to mind), it’s a nonfiction piece that began as one sort of project before the real world shaped it into something different.

Quest, screening as part of the Charlotte Film Festival, was initially conceived as a look at the neighborhood music studio created by Christopher “Quest” Rainey, who lives in North Philly with his wife Christine’a “Ma Quest” Rainey and their bright daughter Patricia “PJ” Rainey. Filmed over the course of approximately a decade, this powerful and poignant picture moves well beyond its original niche to examine a family that eventually has to contend with the tragic specter of violence as it directly impacts them and ensures that nothing will ever quite be the same again. Other characters — family members, neighbors, supportive cops — float in and out of the narrative, but the focus is never far removed from the formidable trio at its center.

Quest primarily unfolds throughout the Obama years — indeed, the elections occasionally pop up in the story — but with the dawning of Trump’s AmeriKKKa (the tyrant even shows up briefly, imploring African-Americans to vote for him), its importance as a document of the marginalized and the victimized looms larger than ever.

(Quest will be shown at 7:15pm Friday, Sept. 29, at Ayrsley. For more information on this and other Charlotte Film Festival offerings, go to www.charlottefilmfestival.org.)