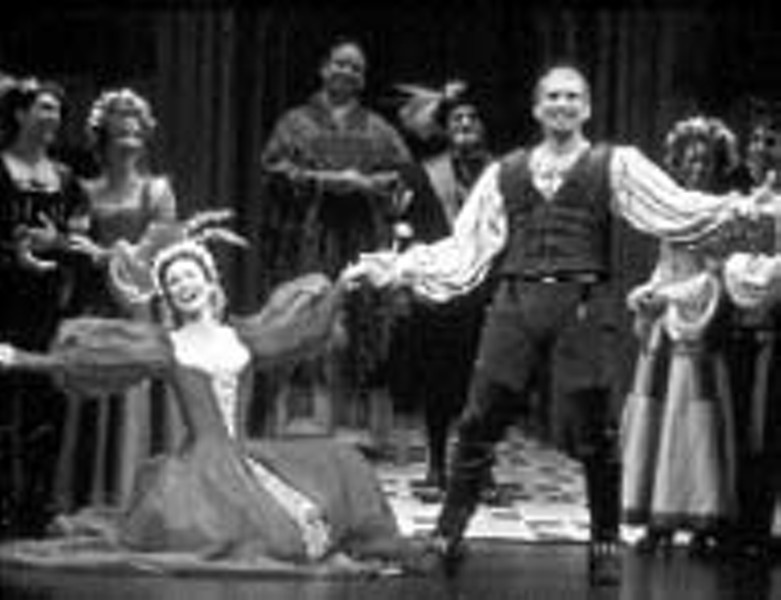 Joan Marcus KISS ME KATE Rachel York and Rex Smith in splashy musical production
You can still tell the difference between Myers Park and Nashville. But during a seven-week run of Always...Patsy Cline, Theatre Charlotte is being turned into a shrine for a country music icon. Outside the front entrance, the visiting Producer's Group has draped funky fuchsia-and-white signs on the awning with the show title written in lurid script.

Inside the Queens Road barn, the stage has been transformed into a Myers Park version of the Grand Ole Opry. An old-timey WSM microphone stand has sprouted downstage center, and there's a truly slick set design behind Patsy as she concertizes, easily in the same class as the Charlotte Rep production of the same Ted Swindley script five years ago at Booth Playhouse.

Our Pats is exactly the same, sultry-voiced Jessica Welch. Having seasoned her portrayal in 38 states since her last Charlotte appearance, Welch has added some acting licks and dramatically improved her emulation of Cline's vocals. Timbre and twang are often spot-on, and those melodic diphthongs that are Cline's signature -- where she glides gracefully from one note to another on the same vowel -- are better executed than ever.

Trouble is, Welch and the tight sextet behind her led by Scott McKenzie seem to have fallen hopelessly in love with those glides. When Welch and her Bodacious Bobcats should be pushing the tempo, the beat, and the emotion, they're still luxuriating in those glides. "Walkin' After Midnight" just didn't have that same locomotive momentum it had last time, and "I Fall to Pieces" -- well, I reckon you could say it had fewer pieces.

Once Welch got into the music as deeply as the voice, results improved. "It Wasn't God Who Made Honky Tonk Angels" had a nice, loping groove, and "Crazy" was dripping with hillbilly pathos.

Livening things up to the brink of giddiness is Deborah Rhodes as superfan Louise Seger, a definite improvement over the Rep version. Rhodes works the audience shamelessly and immerses herself enthusiastically in even the most cornball aspects of Seger's adulation without a blush.

Always is meticulously researched by Swindley and, since he directs, true to its inspiration. There's a letter to the real-life Seger that Rhodes reads to us after Cline perishes in a plane crash at age 30.

All in all, an auspicious debut for the Producer's Group. The backup vocal quartet, especially on the ballads and sacred pieces, added extra polish. Now if McKenzie and his Bobcats can put some more giddyup in their backup, we'd have an even livelier honky-tonk shrine on Queens Road.

Any theater aficionado who has seen Kiss Me, Kate can testify to the wit and erudition of composer/lyricist Cole Porter. Writing "Brush Up on Your Shakespeare" and cataloguing the Bard's famous plays -- and poems! -- Porter honors theater tradition by quoting from Macbeth rather than saying the feared name aloud. And where else do you return from intermission at the front of the theater and watch...actors taking their intermission at the back of the theater before returning to the stage?

Still, Porter's sophistication didn't pass muster for the producers of the Kiss Me, Kate revival that won four Tony Awards during the 1999-2000 Broadway season. In an effort to rehabilitate Porter's PC quotient, unnamed tinkerers meddled with the original lyric sheets.

But as a touring version of the Gotham smash triumphantly proved last week at Belk Theater, the meddlers did little harm. Sure, they slightly dulled the sharp edges of "Too Darn Hot" with a few silly rewrites, but the greater damage was done to that number by lead dancer Randy Donaldson.

He just didn't have the charisma of the show's frontliners, headed by sizzling Rachel York as Katharine/Lilli Vanessi and Rex Smith as Petruchio/Fred Graham. York and Smith starred together on Broadway in the rehab Scarlet Pimpernel 2.0, so the intensity of their chemistry -- and comedy -- in Porter's musicalized Taming of the Shrew was no accident. Political correctness be damned, York's "I Hate Men" was the undisputed smash sensation on opening night.

With all the seasoned pros who routinely moonlight in Theatre Charlotte productions, you may have forgotten what true community theater feels like. Head on up to the gorgeous Duke Family Performance Theatre and watch the Davidson Community Players' production of The Sound of Music -- if you can still buy a ticket.

Sets, costumes, lighting, and musical direction are all first-rate. Jacqueline Culpepper, as Maria, is the only person onstage who can sing, and nobody can really act.

But under Jamey Varnadore's resourceful direction, it's glorious anyway. When the irrepressible Maria taught the irresistible Von Trapp kids their "Do-Re-Mi," I fell in love with this sentimental goo all over again.*