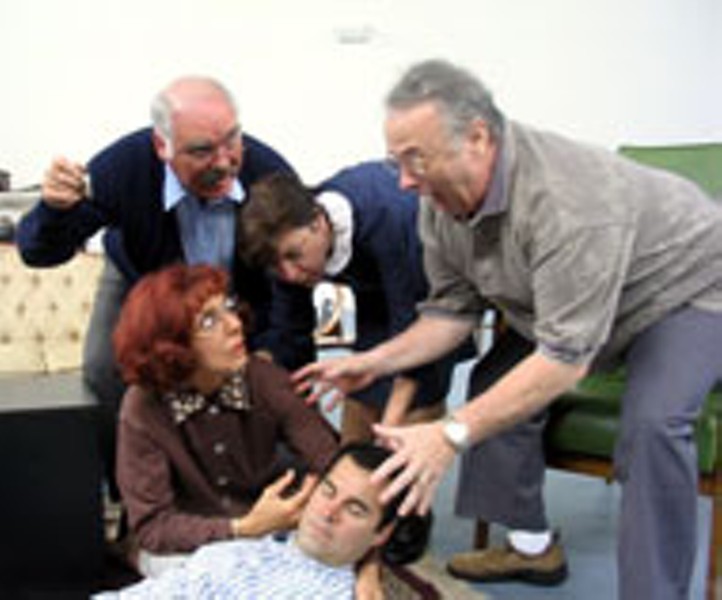 A scene from Over the River and Through the Woods
Off-Tryon Theatre Company, fresh from scoring an upset victory in the comedy category at the first-ever MTA Awards, now has pounced hungrily on the possibilities of producing Pageant. The Bill Russell/Frank Kelly book and lyrics (with comfortably forgettable music by Albert Evans) are an unabashed wallow in the ceremonies, stupidities, and outright objectifying sexism immortalized by American Beauty Pageantry. Yes, there are the familiar swimsuit and evening gown parades, counterbalanced by the talent and impromptu Q&A segments. Then there's a precious overlay of crass commercialism: all seven finalists for the Miss Glamouresse 1974 title get a chance to pitch new cosmetics in the Glamouresse product line. Each one of these must-have female vanities is supremely absurd.

Although Pageant qualifies as the company's first full-fledged musical, OTTC artistic director Glenn T. Griffin has been rounding up local talent for a Songs We'll Never Sing revue the last two summers. I faulted that show for insufficient cross-dressing, but you won't hear any such complaints this time.

Two of the most familiar faces at OTTC's Cullman Avenue quonset get to unleash their inner queens as contestants alongside Griffin, who presides with unctuous pep as emcee Frankie Cavalier. Stuart Williams proves to be an advanced master of the coquettish blush as Miss Deep South, unfurling additional unsuspected talents as a member of the teams deployed to work on set design, costume design, and choreography.

Travis Osley's cross-dressing exploits, of course, extend back to the halcyon days of Innovative Theatre. So his scintillating performance as dipsy Miss West Coast comes as no surprise, capped by an interpretive dance that presents the "Seven Ages of Man" with show-stopping pretension.

None of the unfamiliar faces disappoints. As Miss Industrial Northeast, Lamont Cullen Hulley brings us a streetwise quality that would have given Bert Parks an embolism -- with a sore-loser streak that is heresy in the beauty pageant creed. As Miss Texas, Frank Printz projected a slatternly conceit, seeming to strut toward us through the famed swinging doors of Gunsmoke's Long Branch Saloon. Gray Rickard engraved himself memorably in a brief cameo as the sadly departing Miss G of yesteryear.

Perhaps the biggest splash was made by Randy Dodson, a relentlessly dowdy Miss Great Plains. The dance turns of this corn-fed beauty evoked the pure poetry of a cattle car.

On the night I attended Pageant, the four audience members selected as judges chose Miss Great Plains as their winner -- though I suspect the verdict was shamefully stolen from Miss West Coast. It was as if Jonathan Winters' signature creation, Aunt Blabby, had taken Atlantic City by storm with her beauty, grace, and femininity. Highly unlikely and hugely hilarious.

Ceding the vanguard of cutting-edge theatre to smaller companies that aren't tyrannized by their trustees, Charlotte Rep is leading off its new season with a comedy that delivers hearty comfort to patrons seeking to shun controversy. Sporting hot-button words like "therapist," "vegetarian," and "Seattle," Joe DiPietro's Over the River and Through the Woods is the sort of warm-and-fuzzy comedy Rep has often excelled at in the past. Too often, perhaps.

King-sized dollops of old-world tactlessness are served up as two sets of Italian grandparents conspire to keep their Nicky tethered to Hoboken instead of pursuing his career path in marketing across the continent in Seattle. Shamelessly, they set up their grandson with a nurse that the paternal grandmother knows through her canasta partner and a chance meeting at the local supermarket.

Studded with hilarious set-pieces like Nick's attempt to play Trivial Pursuit with the grandfolk, Over the River transitions from schtick to gravitas in Act 2. But there is mortality mixed into all the veal and provolone along the way -- and more of it at the end than we expect at the sitcom-like outset. DiPietro is laudably honest in resolving all of Nick's family, romantic, and career quandaries. So the comedy is sweetly imbued with the pathos of naive immigrants reaching for the American Dream and then watching helplessly as it decimates their family.

Interim artistic director Terry Loughlin corrals some charming pros to elevate the elder generation beyond caricature, cracking the whip only intermittently on the ethnic accents. Michael Edwards and Cinny Strickland, longtime Rep faves, bring fine chemistry to their pairing as the Gianellis, in whose home we spend the evening. Peter Jaye makes a notable debut as terminally ill Nunzio Cristano opposite a somewhat frosty Lourlene Snedeker. Cynthia Barret is a wholesome delight as Caitlin, nurse bait for the beloved Nicky, brimming with vitality and spontaneity.

Alas, our Nicky is only fitfully worthy of all the fuss in Greg Longenhagen's portrayal. Try as I might, I kept seeing an ineffectual Michael Dukakis with a speck of smart-alecky Jason Alexander. Even during Nick's sickness and convalescence, I often saw a sitcom premise instead of an invalid.

Necessity is the mother up in High Point, where the North Carolina Shakespeare Festival soldiers on for one more weekend with last year's generic sets and no outward community support. NCSF managing director Pedro Silva, who customarily throws off his administrative duties once a year to play Scrooge in A Christmas Carol, has now joined the mainstage company -- likely a cost-cutting measure. Ironic, to be sure.

Nonetheless, results that I saw in the current production of Twelfth Night are among the best in recent years. Alan Hickle-Edwards, who won our Best Dramatic Actor award back in 1992 for a Charlotte Rep performance, is at the top of his game as Malvolio. When the steward's comical vanity is evenly balanced against his unjust victimization, Twelfth Night acquires depth and power.

Besides Silva as the belchingest Sir Toby Belch you're ever likely to encounter, you'll also find more ambassadors from the Charlotte theatre scene than ever before -- all former CL Theatre Award winners. Josh Gaffga plays the outlandishly foppish and cowardly Sir Andrew Aguecheek, the obvious non-starter in the competition for the hand of Countess Olivia. Jan Notzon is nearly as prominent as Feste, the Countess's clown. Jason Loughlin and George Gray also make significant contributions. Catch of the year has to be Gretchen McGinty making her NCSF debut as the shipwrecked Viola, who dresses up as a manservant and rouses the unsuspecting Olivia's ardor. McGinty's Shakespearean skills seem to surpass her considerable beauty.