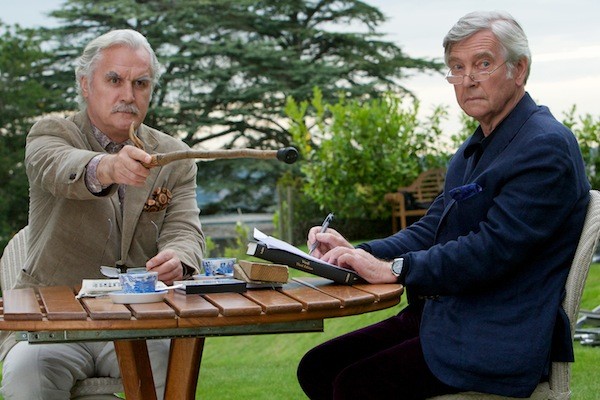 Of all the reviews I penned over the course of 2012, only my complete annihilation of Tim & Eric's Billion Dollar Movie received more negative feedback than my mixed, **1/2 review for The Best Exotic Marigold Hotel. Angered readers assumed that my soft stance on Hotel meant I was clearly an unrepentant gerontophobe, with one lady amusingly stating that my "bigoted" review meant that I "actually write for Creating Loathing" (nyuk nyuk). I'll be expecting handwritten mea culpas from every last one of them, given my appreciation for Quartet — in this new effort, the mean of the principal actors' ages is a hearty 74 years old.

Of course, let's take care not to oversell this piece, which is the sort of genteel art-house offering that will thrill older audiences but seems unlikely to break out with those who don't know Downton Abbey from Howards End. With his directorial debut, Dustin Hoffman has turned to a stage piece by Oscar-winning scribe Ronald Harwood (The Pianist), with the playwright himself tweaking this for the big screen. The result is a low-key charmer set in a British retirement home for musicians, where three of the four members of a beloved quartet now reside. Reginald Paget (Tom Courtenay) is the most collected of the group; Cecily Robson (Pauline Collins) is the flightiest; and Wilfred Bond (Billy Connolly, the spring chicken of the primary performers at 70) is the randiest. When the final member of the quartet, Jean Horton (Maggie Smith), shows up to live at the residence, the other three have mixed emotions, since it was her actions that split up the group as well as sabotaged her own marriage to Reginald. But despite any prior misgivings, the three decide to talk Jean into joining them for a historic re-teaming at the home's fund-raising concert.

As expected, Connolly ends up with the bulk of the choice quips as his Wilfred Bond lusts after the ladies — it takes a skilled comedian to avoid turning the character into an off-putting lecher, and he pulls it off (his crack about "wood" is priceless). Collins' Cecily, meanwhile, earns our sympathy as the one most affected by the downside of advancing age (specifically, what it does to the mind), while Smith and Courtenay make a handsome pair as their characters try to discover if there's anything left to salvage from their past love. As the cherry on top, Michael Gambon — Dumbledore himself — turns up as the easily agitated director of the home's musical program. Like everyone else involved with Quartet, the actor seems to be having a good time — a sentiment shared by viewers tuned into this melodic chamber piece.