DAMSELS IN DISTRESS (2012). It doesn't quite match the 20-year stretch when Terrence Malick sat out cinema (between 1978's Days of Heaven and 1998's The Thin Red Line), but until Damsels in Distress, writer-director-producer Whit Stillman hadn't made a movie in 14 years — and that's something akin to a tragedy. (The Stillman canon had consisted of only three pictures: Affectionately tagged the "Yuppie Trilogy," it began with 1990's Metropolitan, ran through 1994's Barcelona and ended with 1998's The Last Days of Disco.) The damsels of the title are the members of a clique dedicated to spreading what they perceive to be wisdom and kindness all over campus. There's Violet (Greta Gerwig), the team leader; Rose (Megalyn Echikunwoke), the cool Brit; Heather (Carrie MacLemore), the pretty, perky and petite brunette; and Lily (Analeigh Tipton), the campus newcomer who's absorbed into the group but ends up constantly challenging Violet's methods and musings. It would be wonderful to report that Damsels in Distress marks a completely triumphant return for Stillman, yet while it's on balance recommendable, it falls short of his '90s output. The dialogue, always Stillman's strongest suit (he earned his sole Oscar nomination to date for Metropolitan's original screenplay), remains a constant delight, with Violet's circular logic and turn of phrases particular high points ("doofi," which she states is an acceptable plural form of "doofus," might be my new favorite word). But while none of Stillman's movies could be described as heavy on plot, this one often meanders to the point of distraction, with some of these out-of-left-field sequences working (a tribute to Fred Astaire's "Things Are Looking Up" musical number from 1937's A Damsel in Distress) while others run aground (a curiously dismissive take on homosexuals coming out of the closet). The performances are acceptable, although Gerwig remains an acquired taste; unfortunately, what the movie is crucially missing is a role for Chris Eigeman, who was a constant source of cynical pleasure in Stillman's three previous works. Still, while Damsels in Distress falls short of its potential, there's no denying that a half Whit is preferable to no wit at all.

Blu-ray extras include audio commentary by Stillman and select cast members; a behind-the-scenes featurette; deleted scenes; and a Q&A with Stillman and his cast. 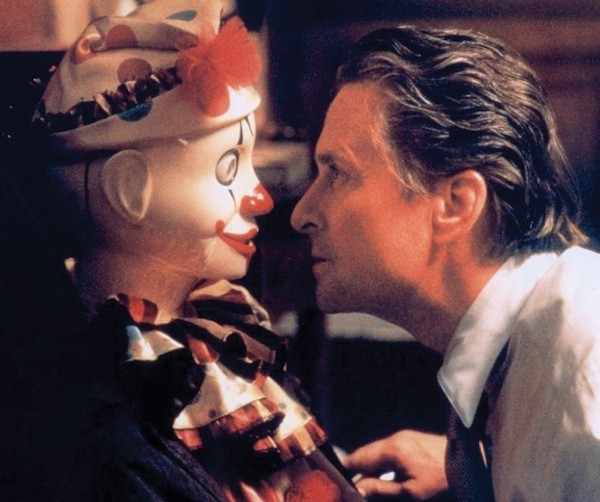 THE GAME (1997). Michael Douglas is no stranger to playing grouchy, pessimistic guys with little interest in the world around them, as witnessed in such efforts as Falling Down, The War of the Roses and Basic Instinct. In this thriller directed by David Fincher, Douglas plays Nicholas Van Orton, a man so emotionally repressed that he almost makes the actor's other brooders seem as cheery as Pippi Longstocking by comparison. A millionaire with a ne'er-do-well brother (Sean Penn) and painful memories of the day when their father committed suicide, Nicholas shuns all forms of commitment and socializing — his big plan for his 48th birthday is to watch financial reports on TV. His sibling offers him an unusual birthday present: an immersive, live-action "game" controlled by a group called Consumer Recreation Services. It turns his life into a high-stakes adventure, and while initial incidents prove minor, Nicholas eventually finds himself avoiding machine gun fire, death by drowning, and other potentially fatal incidents. By keeping the audience in the dark along with its protagonist, The Game harkens back to the classic paranoia thrillers from the 1960s and '70s; most specifically, John Frankenheimer's 1966 Seconds, another movie in which a constipated businessman gets involved with an outfit that forever alters his life. But the key difference is that those earlier films carried out their nefarious machinations right through the end credits; this one, on the other hand, ends on a note that feels jarringly inconsistent with the rest of the picture. Moreover, writers John Brancato and Michael Ferris have concocted a script that's ultimately too clever for its own good. Like The Usual Suspects or Fincher's own Seven, this is one of those movies that's so tightly written and densely plotted, it leaves no room for error ... or viewer queries. Unfortunately, the questions will start flying even before the picture's over — head-scratchers on the order of "How did they know he was going to do that?" and "Wouldn't their plans fall apart if he had reacted to this situation differently?"

PEOPLE LIKE US (2012). Alex Kurtzman and Roberto Orci are best known as action-script specialists, whipping out screenplays both good (the Star Trek reboot, TV's Alias) and bad (Transformers: Revenge of the Fallen, Cowboys and Aliens), so it's a modest surprise to see their names attached to the family drama People Like Us. Maybe they needed a break from crafting gems for Optimus Prime to speak ("At the end of this day, one shall stand, one shall fall!"), or maybe they figured this was their Oscar-winning Ordinary People — at any rate, the middling result will doubtless send them scurrying back to the various cash cows grazing in their field. People Like Us works in spurts, but that's almost entirely due to the contributions of its actors. Chris Pine plays hustling businessman Sam, who learns after his estranged father's death that the old man had a second family on the side. Sam visits Frankie (Elizabeth Banks), the half-sister he never knew he had, but rather than reveal his identity, he elects to bide his time and pose as a concerned AA colleague instead. This narrative contrivance, which has been employed so often in movies that it deserves both a retirement party and a funeral, blocks scripters Kurtzman (who also directed), Orci and Jody Lambert from ever fully delving into the worthy subjects of familial betrayal and reconciliation, keeping viewers as distant from the characters as the characters are from each other. Some superlative turns help significantly: Michael Hall D'Addario never makes an open play for sympathy as Frankie's troubled son, while Olivia Wilde brings some outsider perspective as Sam's sensible girlfriend. Best of all is Banks as the harried single mom who's repeatedly being dealt right-cross punches every time she turns around. Come to think of it, Banks is frequently the best thing about any movie in which she appears — tell me again why she isn't a huge star? 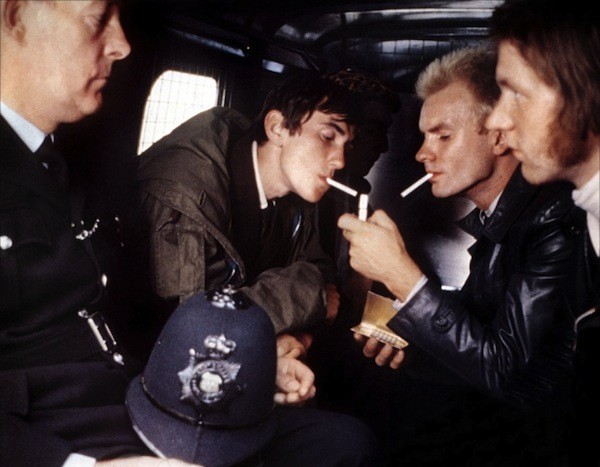 QUADROPHENIA (1979). Based on The Who's 1973 double album, Quadrophenia manages to be both quintessentially British and irrefutably universal. Set in 1964 London, it employs a fictional plot to carry a fact-based scenario: the persistent clash between two factions of music lovers, Mods (slick kids who favored bands like The Kinks and, yes, The Who) and Rockers (leather-clad youths who preferred the older, '50s brand). Phil Daniels is excellent in the central role of Jimmy, a Mod who, like most everyone else in his circle, is primarily interested in the old battle cry of sex, drugs and rock 'n' roll. He takes a special fancy to the lovely Steph (Leslie Ash) and looks up to the iconic Ace Face (Sting), but it isn't until everyone heads to Brighton — and gets caught up in the violent gang war that decimated the beach town — that Jimmy finally feels in control. Or so he thinks. While its setting, history and dialect may be veddy, veddy British, Quadrophenia should resonate with everyone who has ever felt marginalized, misunderstood and misguided as a teenager. Director Franc Roddam, who also wrote the astute screenplay with Dave Humphries and Martin Stellman, especially displays his skill in the superbly orchestrated Brighton riot scene, and the film is packed with slow-burn humor: I especially like Jimmy's dad (Michael Elphick) telling his son, who's watching The Who perform on TV, that the band's lead singer sounds like "a drowned dog." Ray Winstone, a popular character actor these days (The Departed, Indiana Jones and the Kingdom of the Crystal Skull), appears as the beatific Rocker who suffers a vicious beatdown by the Mods, while Mike Leigh regular Timothy Spall pops up in a bit role as a projectionist.

DVD extras include audio commentary by Roddam and cinematographer Brian Tufano; new interviews with Bill Curbishley, the film's co-producer and The Who's co-manager, and Bob Pridden, the band's sound engineer; a segment from a 1979 episode of the British TV series Talking Pictures, with a look at Quadrophenia; and segments from two mid-1960s French TV shows in which Mods are discussed. 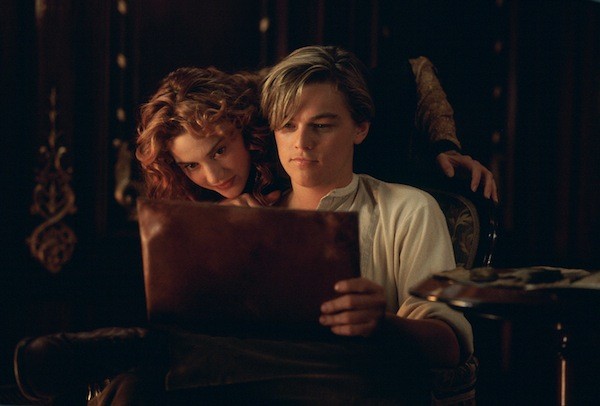 TITANIC (1997). James Cameron spared no expense for this year's re-launch of his Oscar-winning smash, spending millions to convert the film into 3-D for its theatrical run this past spring. Admittedly, most pictures that weren't originally filmed in that process but were only converted later as an excuse to boost ticket prices have failed to provide much extra oomph to the 2-D imagery (e.g. Clash of the Titans, Alice in Wonderland), but if there's one thing to be said about Cameron, the man knows how to derive the most technological bang for his buck. Theatrically, Titanic in 3-D looked fantastic, employing the format in a way that made viewers feel as if they were the ones rounding a corridor corner or fighting to stay afloat in that icy Atlantic water. The epic has now been released on Blu-ray in both 2-D and 3-D versions, and, as expected, it looks and sounds fantastic. As for the content of the film itself? Fifteen years later, the highs and lows still remain; luckily, what's good about the movie continues to easily outweigh its flaws. The fictional storyline is hoary in the extreme, relying on a "wrong side of the tracks" romance: Shortly after boarding the ship as it prepares to embark on its maiden voyage, poverty-stricken artist Jack Dawson spots socialite Rose DeWitt Bukater and instantly falls for her. In these career-propelling roles, Leonardo DiCaprio and Kate Winslet are excellent, delivering warm, winsome performances that provide their romance with an epic grandeur it certainly wouldn't have attained in less capable hands. The trouble, for both the young lovers and the viewers, is the presence of Rose's fiancé Cal Hockley (Billy Zane), a supercilious millionaire who would just as soon push the lower classes off the face of the earth as give them the time of day. As I watched Cal constantly berate the poor, smack Rose around, and try to kill Jack by taking shots at him, I kept wondering why Cameron had elected to leave off a mustache that Zane could twirl at regular intervals — the character is even more cartoonish than actual cartoon character Snidely Whiplash. Yet despite the pesky presence of Cal, it's a credit to Cameron's hot-and-cold screenplay that even as the ship goes down, taking Zane's career with it, we're utterly committed to the plight of Jack and Rose. Their characterizations personalize the second half of the film, which is basically one sustained "money shot." Overlooking a couple of shaky CGI snatches, the effects are superb, and the final submergence of the "unsinkable" craft is absolutely dazzling.

Blu-ray extras include audio commentary by Cameron; separate audio commentary by various cast and crew members (including Kate but, alas, no Leo); yet another audio commentary, this one by historians Don Lynch and Ken Marschall; two lengthy new documentaries, one about the film Titanic (Reflections on Titanic) and the other about the factual Titanic (Titanic: The Final Word with James Cameron); dozens of behind-the-scenes featurettes; 30 deleted scenes; and a trio of Titanic parodies (MTV, Saturday Night Live, and the ever-popular Titanic in 30 Seconds).