New York, NY (October 1, 2020) -  "Commercials" was released  August 7, 2020 on all platforms. This five track EP album is performed by Proper Einstein and produced by JudoFlipChopX3.


This is the first music project Proper Einstein worked with another producer besides himself. The five tracks on the EP are Come Kick It, Making Moves, Selfie, Metalistic, and Stay True. The first song “Come Kick It” from the EP has been featured in music blogs and many TikTok videos.


Proper Einstein (musical alias for Tony Alexander Brown Jr.) has been making waves in the indie underground ever since his explosive debut with his well-received debut Single “#LateNite” in 2015. Often described as “prolific” and “refreshingly unpredictable”, it is easy to see why he has been affectionately dubbed “the Musical Genius” by his growing fanbase. Operating like a true renaissance man, Proper Einstein has earned the titles of actor, singer, songwriter, multi-instrumentalist—- as well as award-winning producer. When describing his relationship with music, Proper Einstein explains: “Music is the universal language. I can speak to anybody on earth through my music. The reason why I strive to be a multi-genre "genius", is so that I can reach all of the earth to let people know that it is okay to be yourself. It's okay to be different. You don't have to conform to fit in with society. Radio is teaching people that music has to sound a certain way to be considered good or acceptable. The media is teaching us that we have to look and act a certain way. I want to let people know to keep reaching for their goals despite all odds. I want to inspire people. I'm doing all of this with God's help and I want them to know that they can do the same. To sum it up: Keep going, don't give up, we're all in this together, let's inspire each other.” 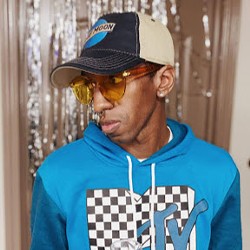 Musically, Proper Einstein has effectively combined his wide-spanning musical tastes and influences into a giant beaker — and much like a mad scientist — he has shaken ferociously until what has emerged is undefinable — an infectious explosion of incredible, emotive sound. With his brilliant fusion of various genres and styles, (as well as his evident refusal to operate within any pre-conceived boundaries or industry standards); Proper Einstein strives to live up to his title as “the Musical Genius”. Within his growing catalog, his remarkable versatility is always on full display. Each track features a unique array of accompanying instrumentation, creative sequencing, thought-provoking lyrics, and clever songwriting. His alluring style is designed to draw you into an intimate and self-reflective sonic journey.