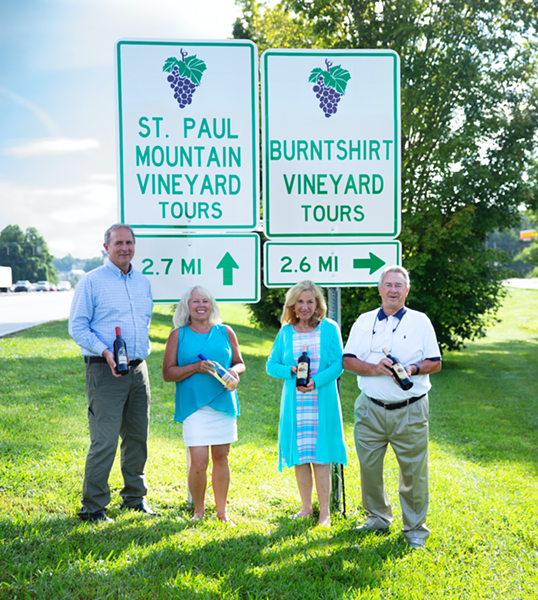 (July 22, 2019, Hendersonville, NC)- Agribusiness Henderson County (AgHC) has announced success in a rigorous process to gain a federal designation as an American Viticultural Area (AVA) for local grape and wine producers. AgHC and NC State Extension jointly filed the petition for the designation in December 2016, which now establishes approximately 215-square miles in Henderson County as the AVA named “Crest of the Blue Ridge Henderson County”. AgHC’s Executive Director, Mark Williams says, “The AVA petition has aged for 3 years, but the cork is finally popped, and we can toast a great achievement for Henderson County’s vineyards.”

An AVA is a grape-growing region having distinguishing features, a name and a delineated boundary. The establishment of AVAs allows vintners to describe more accurately the origin of their wines to consumers. For a wine to be labeled with an AVA name, at least 85 percent of the wine must be derived from grapes grown within the area represented by that name. Examples of AVAs are Napa and Sonoma Valley in California and Yadkin Valley, here in North Carolina.

When the petition was filed, the area had 14 commercial vineyards over 70 acres, with existing growers planning a combined expansion of 55 acres. AgHC indicates much of the expansion has already occurred and the designation is almost certain to spawn more acreage than originally planned. Henderson County had two wineries in 2016, Saint Paul Mountain Vineyards and Burntshirt Vineyards. Point Lookout Vineyards has since opened and AgHC says four more are on track to open soon.

Although AgHC was the primary petitioner for the AVA, they credit Alan Ward, owner of Saint Paul and Lemuel Oates, owner of Burntshirt for initiating the process. Ward and Oates researched and engaged the consulting services of geologist Joseph Forest of Resource Geoservices. AgHC Executive Director Mark Williams says, “Their foresight and leadership were critical to the process, along with thousands of dollars they personally invested”. Barbara Walker, of St. Paul, worked closely with the consultant and first proposed the “Crest of the Blue Ridge” name.

Williams is quick to point out, “This was truly a team effort. In addition to efforts of the wineries, consultants, AgHC and Extension, the Henderson County Travel Development Authority was a key supporter and Congressman Mark Meadows was actively in contact with the Treasury Department in seeking the designation.”

For more information about this designation visit AgriHC.org.