Consumer groups cheered when payday lenders were booted from North Carolina, but that doesn't mean the high-interest loans no longer have local ties. 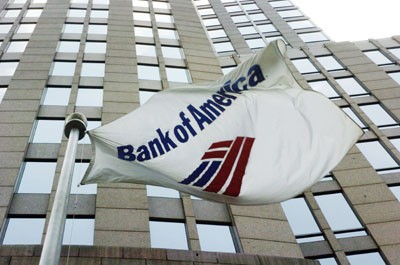 Two of Charlotte's economic giants, Bank of America and Wachovia, bankroll some payday lenders -- the same lenders whose operations high-ranking officials found so distasteful that they drove them from the state.

These economic ties are no secret -- they're disclosed deep in federal Securities and Exchange Commission filings -- but the relationship is unknown to many consumers, some of whom would doubtless be surprised by the industry ties.

"Those are the types of loans that they won't show in their commercials or glossy advertisements," says Rick Jurgens, consumer advocate for National Consumer Law Center.

Jurgens first noticed the ties when he was researching some states' public utilities relationship with the lending industry. What he found was surprising.

Advance America, the industry heavyweight, got a $265 million line of credit funded by several banks in 2004 -- well after public opinion began turning against high-interest, short-term loans. The banks included Wachovia, Wells Fargo, BB&T and Carolina First Bank. Another lender and administrative agent? Bank of America. As recently as March, according to SEC documents, the company still had access to the cash.

"Payday lenders are often not highly capitalized companies," Jurgens says. "That's why they use lines of credit, which is essentially like a credit card with a relatively low interest rate, to do day-to-day lending."

Inner City Press, a New York advocacy group, found Wachovia has "an unspecified portfolio of payday-lending clients," according to the organization's Web site. The group is also opposing Bank of America's application to acquire LaSalle Bank, due in part to its ties to payday firms.

Wachovia spokeswoman Iris Cumberbatch would only say the bank has "a very limited number of relationships" with payday lenders. "Beyond that, I can't say anything specific because it would violate our privacy policy," Cumberbatch says.

Payday lenders haven't operated in North Carolina since 2005, when state Commissioner of Banks Joseph Smith ruled the practices of Advance America were illegal. The state had prohibited payday lending since 2001, when a law authorizing the practice expired. But in practice, lenders flourished by making loans through out-of-state banks, a practice often derisively termed the "rent-a-bank" model. In 2005, for instance, payday loans cost N.C. residents more than $74 million, according to the Center for Responsible Lending, an industry opponent based in Durham.

"The fact that those guys are gone is a wonderful thing," says Bruce Hamlett, service director of the economic independence program of United Family Services. "Those loans were obscene." 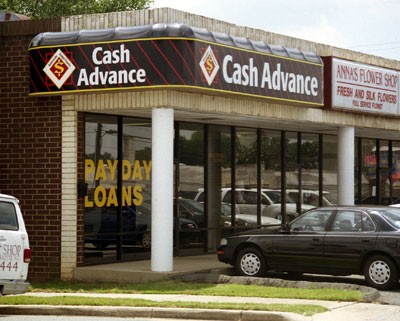 Here's how the loans worked here, and still work in other states: You take in a pay stub and proof that you have a checking account. You write a postdated check and in 15 minutes you come out with up to $500. It's supposed to be paid off within a specific time frame, such as two weeks.

If you can't pay it back by then -- as industry and consumer groups' studies show is often the case -- you renew the loan and pay the interest fee again. A $100 two-week loan with a $15 fee winds up with an annual interest rate of 391 percent. "It's suicidal financial management," says Jean Ann Fox, director of consumer protection for the Consumer Federation of America.

The payday industry argues it's simply providing short-term necessary cash to people who have little hope of getting a loan through traditional banking channels. But consumer groups charge the industry traps the vulnerable and broke in a spiraling cycle of debt and, in the process, reaps profits that would shame a loan shark.

The Center for Responsible Lending found that nearly 90 percent of the industry's revenues come from fees "stripped from trapped borrowers." According to a November report from the center, the typical payday borrower pays back $793 from a $325 loan.

In a way, conventional banks are fostering demand for payday loans. At least that's what Advance America argues. "The payday cash advance services industry has grown steadily since the early 1990s in response to a shortage of available short-term consumer credit alternatives from traditional banking institutions," reads one filing with the SEC. "The rapid increase in the charges associated with having insufficient funds in one's bank account, as well as other late/penalty fees charged by financial institutions and merchants, have also helped increase customer demand for advances."

These fees have drawn criticism from many consumer advocates, but for now it's payday lenders who are feeling the brunt of disapproval from lawmakers and citizens.

Last October, President Bush signed into law a measure effectively banning payday loans made to military families. Military officials had found that lenders were targeting servicemen and women; in some cases, the resulting debt problems caused them to lose security clearances.

Several states, including Georgia, Pennsylvania and Oregon, have clamped down on lenders. The District of Columbia also looks set to repeal a law allowing the loans there. "There's been a lot of outcry," Fox says.

Susan Lupton, senior policy associate with the Center for Responsible Lending, isn't expecting payday lending to return to North Carolina. "I'm sure they're angling to get back in, and we will be angling to keep them out," Lupton says.

That doesn't mean the $28-billion industry will be shutting down soon. Since 1995, payday loan outlets have multiplied twelvefold, and they're currently legal in 38 states, including South Carolina. United Family Services' Hamlett says he's seen fewer debtors with payday loans since lenders left the state, but notes that local residents are driving across the state line. "South Carolina residents are being hit hard," Hamlett says.

As Warren Bolton, an associate editor of The State in Columbia, noted earlier this month, there are more payday lending locations in the United States than there are Wal-Marts and McDonald's combined.

Of course, as long as payday loans are legal, there's not much to prevent a bank from having relationships with legitimate businesses. But such financial ties could tarnish banks' public image. That's one rationale SunTrust cited when it stopped backing the industry in 2004. "After considering the potential reputational risks and consumer harm that could result from lending to such a company, [the bank] is revising its credit policies to prohibit future loans to all businesses that engage in payday or title lending," SunTrust said in SEC filings.

And after The Charlotte Observer reported in March that the state's pension fund contained payday stocks, N.C. Treasurer Richard Moore moved quickly to divest of the holdings.

Advance America has taken notice of how public perceptions could affect them. "The consumer groups and media reports typically focus on the cost to a consumer for an advance and typically characterize these advances as predatory or abusive toward consumers," it reported in a March filing with the SEC. "If this negative characterization of advances becomes widely accepted by consumers, demand for advance services could significantly decrease, which could materially adversely affect our business, results of operations and financial condition."

Jurgens of the National Consumer Law Center says the relationship between traditional banks and payday lenders raises larger issues. As more areas of the financial services industry are deregulated, borrowers and bank customers are left to weather the whims of the market.

"It's the wild frontier out there, and there's a lot of ways to get saddled with very, very high-interest-rate loans," Jurgens says. "It's crazy out there, and the big banks are participating in the craziness -- sometimes directly, sometimes indirectly."