Earlier this year, when Amanda Zullo was awarded $5,000 in grant money from the Emerging City Champions Fellowship, a partnership between 8 80 cities and the Knight Foundation, she thought her idea for Pop Up Produce would just be a side gig.

She soon realized, however, that Pop Up Produce, which aims to empower residents living in food deserts to grow their own food at home, was going to be a much larger part of her life than anticipated. She scaled back her role at the firm she was working at and began working full-time to grow Pop Up Produce. Since the company launched on August 20, Zullo and her team have been able to donate 122 urban gardening starter kits to folks living in food deserts or attending Title I schools, while also starting six community gardens at schools, in neighborhoods or at rec centers. Creative Loafing spoke with Zullo about what she's been able to accomplish in such a short time, as well as how she hopes to follow-up on the impressive start.

Creative Loafing: What is the mission for Pop Up Produce?

Amanda Zullo: The mission is to empower families and individuals to grow their own food, while educating them on the benefits of fresh produce. Instead of just being like, "Here, thanks for buying, good luck," we try to think of it like a doctor's role. Send in your progress, follow up visits, people share through the hashtag #ProduceForProgress to see how they're doing. I do a weekly check in with them. If they need any help, then we're able to provide that aid, so it's a way to loop in the affluent side helping the more in-need side of Charlotte. It's a way to build community together. 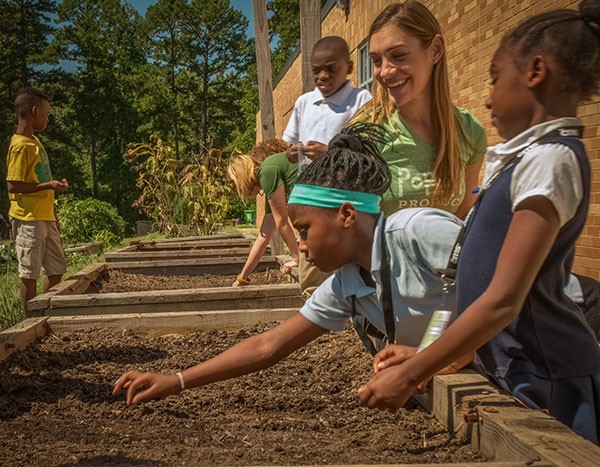 What's your experience been like in being able to reach out and help youth with community work like this?

It's huge. Initially, I wasn't thinking of the youth, I was thinking everyone from youth through elderly. I hope if we're able to continue the work, if we get more grant funding, then I can start building that demographic beyond the youth. I think the elderly would really benefit from this as well.

But with the kids, they're born into these situations that they can't control. If you can empower and educate them at a young age when they're these bright sponges, then hopefully you can use this opportunity to retrieve and alleviate them out of this issue, so that way they can have upward mobility in their own life. So, in terms of health, not only are people super excited about Pop Up because of the community aspect and raising awareness about food deserts, there are also lots of health professionals saying, "This is awesome." You would not believe how many kids are in third grade and already have Type 2 diabetes. It literally is a byproduct of what they're eating.

Is it important to balance between teaching the basics of gardening and breaking bad eating habits that may already be forming at a young age?

It's both. I always think of Pop Up as, it's a cute idea initially, it's this cute concept that maybe someone wants to learn. But I think the challenge is to have it be the catalyst in their mind to activate change. Now that I'm learning how to grow too, it's not as easy as you initially might think. I mean, it's challenging, but you start developing a greater appreciation for nature, for where your food comes from, and it also teaches about patience. We live in a very fast-paced life, but nature adheres to its own timeline and so I feel like with the kids there are so many lessons beyond just the eating side.

The goal is for us to be able to continue in the locations we're at, hopefully add more locations, so we can provide a sustainability component. If we're only there for a year, hopefully more, but we can at least have four seasons to teach kids about seasonality with food. By the time the food is ready to eat, they can begin to taste the difference. Hopefully, they can take that knowledge home back to their parents and say, "Mom, I don't want that, I want this."