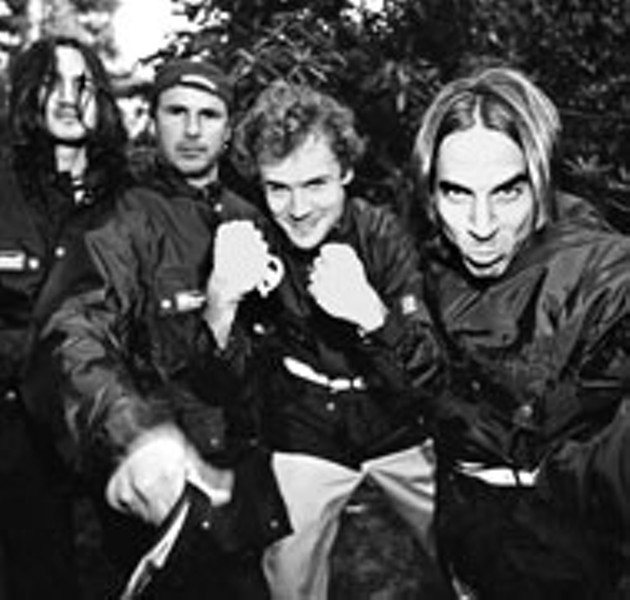 Talk about a sock hop. Twenty -- hell, 15 -- years ago, the Red Hot Chili Peppers were wearing athletic support hose on their band, er, members. Today, they're printing their CD covers on recycled paper and having the famed artist and plate aficionado Julian Schnabel design the album's packaging.From sharing needles to sharing songwriting chores, the band has evolved and then some, with their last platter, By The Way, garnering them serious critical praise (and pretty fair sales) and comparisons to the Pet Sounds-era Beach Boys.

Following is a short travelogue through the band's eclectic back catalog on the eve of their Charlotte appearance at Verizon Wireless Amphitheatre. Some of it sounds outdated by now, and some of it still sounds ahead of its time. However, no matter what, it's always sounded like Chili Peppers music, thanks to the rather inimitable personalities involved. Who knows? Now that they have their act together, the Peppers may get even hotter still.

The Red Hot Chili Peppers (1984)The "Flea and Anthony" album. Interesting in that it took elements of late-70s California punk and mixed it with full-on, George-Clinton endorsed P-funk to create a sort of annoyingly skanky hybrid, much like their New York compatriots The Beastie Boys did in hip hop. Doesn't hold up too well, however. Maybe salvage "True Men Don't Kill Coyotes" and "Police Helicopter" for mix tapes.

Freaky Styley (1985)Enter Hillel Slovak. The funk instantly gets funkier, thanks to Slovak's percussive guitar playing and a much tighter rhythm section of Flea and drummer Cliff Martinez. Slightly more listenable, but the album's 14 songs will tax most any listener who wasn't there at the time. The refreshing: the boys seemed to have no shame. The negative? The boys seemed to have no shame.

The Uplift Mofo Party Plan (1987) The college audience really starts catching on here, and the band follows suit, toning down the funk just a notch to make their sound a perfect fit at college rock stations. Around here, you could still see them at places like the old 13-13 club. It wouldn't last long, however.

Mother's Milk (1989) The boys grow up (slightly -- drugs and hijinks still abound). Chad Smith gives the band a versatile drummer who can lay down the funk, yet pound the skins like a punk. From an ace Stevie Wonder cover ("Higher Ground") to the self-aware Litefunk of "Knock Me Down," you see the band beginning to reassess things. Perhaps they just became aware of their own mortality. No matter. From here on out, the band seemed determined to be taken seriously at least as much as they were taken to jail. Enter John Frusciante, now the band's heart and soul.

Blood Sugar Sex Magik (1991) Begins the Rick Rubin Era. Rubin, having established a hell of a track record at this point, hears something in the boys, something they seem to be faintly aware of -- a conscience. Lots of still-listenable stuff on here: "Breaking The Girl," "Suck My Kiss," "Give It Away," the title track, and "Under The Bridge" come to mind immediately. More abstract than previous albums, whose main flaw was their extreme obviousness.

What Hits!? (1992) The best of the earlier stuff, and not a bad deal were one looking to acquire some of the back catalog. All the big ones are here: "Higher Ground," "Fire," "Knock Me Down," etc. "Under the Bridge" seems on here only as a ploy for EMI to sell the record to the Pepper neophyte.

Out In L.A. (1994) A motley crew of outtakes and live cuts here, as well as some dance remixes. Outside of the live "Castles Made of Sand," few other cuts ever deserved being heard by anyone other than the band and their close friends, who presumably got some of the many in-jokes contained herein.

One Hot Minute (1995) Subtract John Frusciante, add Dave Navarro. Sum total? In the negative. The Peps had become an arena band by this point, which was both a good (sales) and bad thing (the music was all over the place, even for the Peppers). Navarro never really fit in, despite his goofy "alternative" look and power chord-friendly guitar style. There are some nice moments, however: "Warped," -- which continues a trend of the band leading off with scorchers -- "Aeroplane," "My Friends," "One Hot Minute," and "Transcending." Thankfully, Navarro was soon jettisoned in favor of a newly heroin-free Frusciante, whose clean head and ear for harmonic subtleties helped the band take its biggest step yet.

Californication (1999) Rubin is again behind the console, and is by this point completely in the midst of his Quentin Tarantino-like obsession with showing a different side of the (by now) underrated artists he happens to be producing (see Johnny Cash, written off for dead before Rubin's arrival, as well as Tom Petty). He does a masterful job here, beginning with a bang ("Around The World") and settling into some mid-tempo future Pepper classics ("Scar Tissue" and the title track). Still, the album wanes a bit on the second half of the record.

By The Way (2002) A future classic. Equal parts California harmonies, Kiedis' own cut-and-paste lyrical style (by now co-opted by Beck and others) and wizened, accomplished musicianship from Flea, Frusciante and Smith, the record has no more than a couple of songs that don't work on at least a couple of levels. Flea reins it in, and Frusciante reigns, doing most of the angelic harmonies contained on the record, of which there are many. Maybe a song or two too long, but more than enough to tide one over until the next go-around.