Legal » For the People

Is political correctness going too far? A recent study found that 80% of Americans say yes. 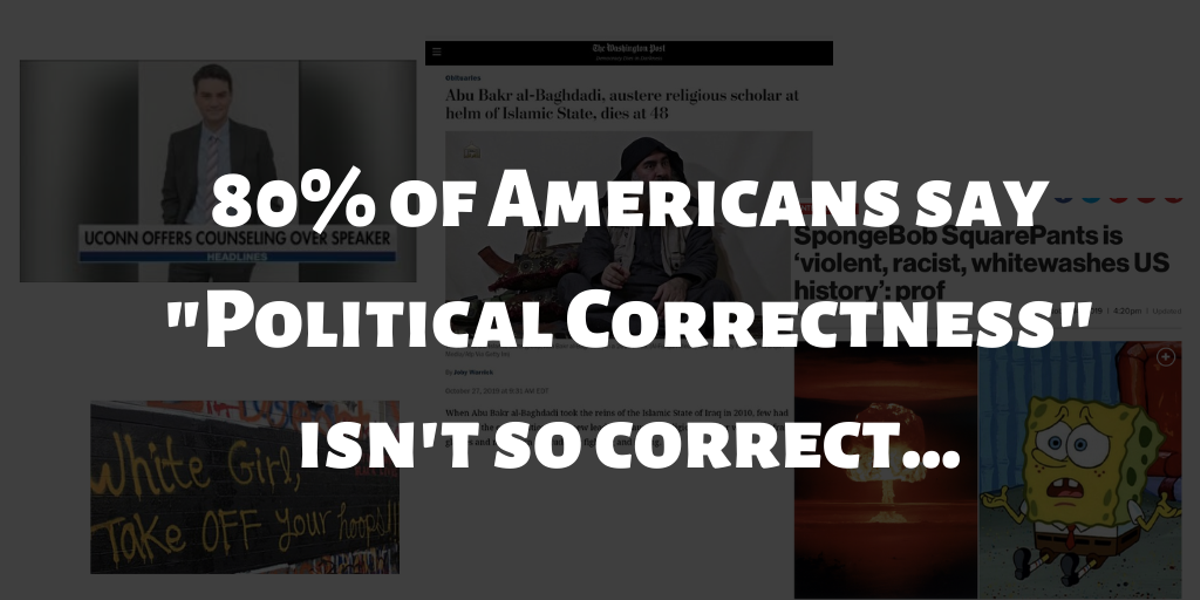 
Everyone has seen the now-viral Christmas commercial for the Peloton exercise bike that cost the company $942,000,000 - in just one day. The holiday ad sparked widespread outrage over alleged sexism.

Is political correctness going too far?
A recent study found that 80% of Americans say yes.


Here are 10 examples of the ridiculous PC culture:

A Seattle school is now calling Easter eggs "spring spheres" to avoid insulting those children who do not celebrate Easter.


The news anchors couldn't even cover the story without laughing.


9. Do not expect people to be on time

Clemson University's “Diversity Benefits for Higher Education” initiative – which cost the school more than $25,000–said that it is culturally "insensitive" to expect people to arrive on time. Why? Because "time may be fluid" in some cultures.


I understand different time zones. I really do. I guess next time someone is late for work, remind your boss, "In my culture, 8:00 a.m. means 8:41 a.m." I mean, such disrespect, right?

A Pitzer College Resident Assistant sent out a campus-wide email declaring that it was unacceptable for white girls to wear hoop earrings — because wearing them was culturally offensive to “the black and brown bodies who typically wear hooped earrings.”


Admittedly, I've never been good at math. It took long enough to understand problems that included X and Y, but now adding pigment as a variable...well, that's over my head.

7. Your chair is sexist

In a recent article, Jane Bone said that furniture haunts kids and symbolizes “the undervalued nature of teaching young children.” Ms. Bone (or Mrs. Bone sorry for not being PC) believes that “Chairs, as objects that furnish human lives, can also haunt those lives and give contradictory messages of power, comfort, and suffering.”


Old Sparky was retired in 1963. Robert Gleason was the last inmate executed by the electric chair on January 16, 2013. Maybe I'm missing something?


6. UConn offers counseling for students prior to Ben Shapiro event

University of Connecticut officials sent out a campus-wide email advising its students that the school would provide counseling sessions in response to political commentator and Harvard Law alum Ben Shapiro’s slated speaking event at the university. The ironic part is that the counseling sessions were offered before Shapiro even stepped foot on campus.


When I was in law school, Bill Clinton came and spoke. While I wasn't traumatized, I wonder whether the administration would have provided counselors for all the women in attendance.

In August 2019, the San Francisco Board of Supervisors issued a statement calling for felons, juvenile delinquents, and drug addicts to be rebranded.

“We don’t want people to be forever labeled for the worst things that they have done.” – Supervisor Matt Haney tweet this

According to the San Francisco Chronicle, from now on felons released back into society are to be known as "returning residents" or "former justice-involved persons." Juvenile delinquents are now called “young people with justice system involvement." And drug addicts are just "people with a history of substance use." Don't you dare say abuse, though?


Well then. If I go on vacation to Paris and come back, I'm a returning resident, not a convicted murderer. Rape victims are also "former justice-involved persons" yet now, their rapists are now tossed under the same over-broad, fluffy title as the victim him or herself. And crackheads, meth addicts, and heroin users are "people with a history of substance use" - just like diabetics who have a history with using insulin. WAKE UP, AMERICA! THIS. IS. WRONG.

4. There is a specific gender for your gender

In the wake of President Trump's announcement that Abu Bakr al-Baghdadi, the leader of radical Islamist terrorist organization ISIS, was dead, The Washington Post covered the story by calling al-Baghdadi, "an austere religious scholar with wire-frame glasses."

No, Joby. Abu Bakr al-Baghdadi was a rapist, mass murderer, terrorist, and a coward. He took children with him as he fled while whimpering his last words before blowing himself up and the innocent kids who were with him. This man was not, nor was he ever, an "austere religious scholar."

An article published by The New York Post covered the University of Washington professor, Holly Barker, and her belief that the cartoon show, Spongebob Squarepants, is "racist, violent, and whitewashes U.S. military rampages."

“There is an absence of public discourse about the whitewashing of violent American military activities through SpongeBob’s occupation and reclaiming of the bottom of Bikini Atoll’s lagoon. – Holly M. Barker (University of Washington, Anthropology Professor) tweet this

Her nonsensical opinion is based upon the town in which Spongebob and his friends live: Bikini Bottom. In the aftermath of the Second World War, the US military moved natives off a constituent island of the Marshall Islands named "Bikini Atoll" so as to test nuclear weapons in the area. According to Barker, Bikini Atoll and a number of its neighboring islands remain too contaminated for habitation today.


Holly, come on now. When I first heard Spongebob had been swept up by the PC vacuum I first thought there was some gripe about Mr. Krabs loving money (since crab is a little expensive) or Sandy Cheeks' name referring to a woman's behind, or maybe even something to do with the Chum Bucket, but this? No, Holly, I never thought about this. I mean, who the heck would?

By now, we've all seen the new Peloton ad where a man buys a woman a Peloton exercise bike for Christmas. Admittedly, the acting isn't top-notch – but is that sexist?


The critique came from the fact that a MAN bought a WOMAN an exercise bike. And, the woman isn't morbidly obese (which is something I didn't even want to address in this article). For whatever reason, snowflakes lost their minds over this. Many presume the only reason the man bought this woman (I don't dare presume they're married these days) the exercise bike was for the purpose of improving her physical appearance against her will. What if she asked for it? What if she wanted the bike? What if she enjoys working out as stress relief? What if the bike has nothing to do with her physique?


I can't help but notice that liberal America has to always look for the negative in whatever it may be. Perhaps she enjoys working out for HERSELF. Maybe, just maybe, some men enjoy partaking in-kind gestures for women. Maybe, just maybe, it has nothing. to. do. with. sex.

Michael Yoder is an attorney based in Washington, D.C., and practices in the areas of complex civil litigation, government corruption, and civil rights.


The information provided on this website does not, and is not intended to, constitute legal advice; instead, all information, content, and materials available on this site are for general informational purposes only.