PaperHouse Theatre's The Aliens gets it right 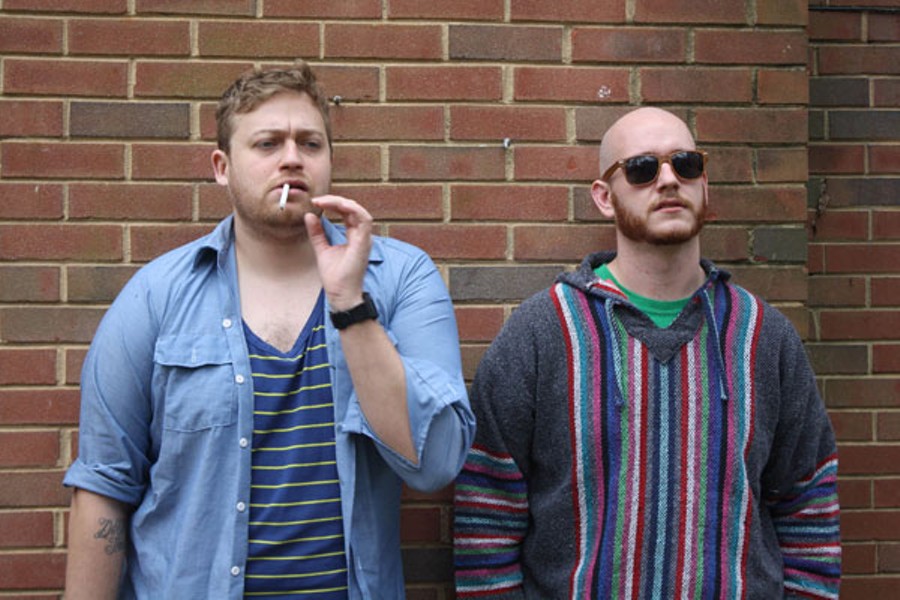 SLACKERS IN VERMONT: Matt Cosper and Grant Watkins star in The Aliens.

You can safely discard your top two choices for who the title characters might be in Annie Baker's The Aliens, for Jasper Koufax and Kevin Janno are neither Martians nor Mexicans. With the permission of the never-seen Ronna — who may or may not work there anymore — Jasper and KJ hang out in the backyard of a Vermont coffeehouse. Jasper alternately exults and broods over his recent breakup with Andrea, while KJ, seemingly the more carefree of the two, stares steadily up at the sky and sings a song we've never heard before. This is KJ's way of trying to sneeze.

We begin to escape this inertia when Evan Shelmerdine, an awkward and gangling teen on his second day at the job, hauls out the trash from the coffeehouse and attempts to expel the slackers from the premises. From here on, Aliens progresses very much like Baker's other play that is set in Vermont, Circle Mirror Transformation. Through repeated scenes, we learn more about the characters and their past lives while their relationships develop and change.

Circle Mirror, which I reviewed favorably in its original off-Broadway production in 2009, had its regional premiere in July in a St. Thomas Players production up in Salisbury. Yet I think this 2010 piece, now at Duke Energy Theater through Saturday, probes more deeply and is even more compelling — partly because the PaperHouse Theatre production, directed by Nicia Carla, is so aptly cast and perfectly pitched.

Meetings in Circle Mirror convene slightly more formally as a drama class with a New Age aura in a dance studio, and it sports its own Shelmerdine, 16-year-old Lauren. But Evan's rite of passage is more central to the action of The Aliens, initiating him in the mysteries of friendship, love, creativity, ambition, drugs and death.

Through most of the first act, Evan is our gateway to learning more about KJ and Jasper. We discover that KJ actually wrote the songs he sings, that Jasper wrote the music, and that they once had a band. But they could never decide what the name of the band was — one of the stabs at it was The Aliens — so the band disbanded.

Both slackers still worship at the altar of Charles Bukowski, presuming that Evan will familiarize himself with the iconic literary dynamo before their next meeting. KJ is contented to sing, skygaze and sip from his concoctions of 'shroom-fueled psychedelic teas. Jasper, the more charismatic of the two, is now a novelist, writing in spasms when he isn't thinking of Andrea — or when he's spurred on by his lingering animus toward her.

We're not surprised that Jasper's surmise is correct when he guesses that Evan hasn't made any friends in high school, but the coffeeshop drudge is about to take some time off from his summer job to be a CIT at a Jewish music camp. Along with his obvious awestruck devotion, this is enough to earn Evan an invite to the slackers' Fourth of July party, where Jasper plans to read from his mighty works and play his guitar.

Evan doesn't presume to come to such an august event empty-handed, but among his contributions, I'll only mention the peppermint schnapps because it sets off a revealing altercation between Jasper and KJ while foreshadowing a pivotal scene in Act 2. Similarly, it would be cruel to reveal the major developments in Act 2, other than to mention that Evan returns from camp having met a girl.

Perhaps the chief wonder here is that this tale of two men and a boy is written and directed by women, and they get it so right. For all I know, Michael Julliard may be the big man on campus at Charlotte Latin School, where he's a sophomore, but onstage at Spirit Square, he's the quintessential wallflower from head to toe as Evan. The way he stands and the way he moves personify his low self-esteem, and Julliard's timing is pretty damn solid in this impressive company as he etches Evan's growth curve.

After just one previous appearance earlier this season in Bloody Bloody Andrew Jackson at Actor's Theatre, where he appeared with Carla, Grant Watkins gives us a far better grasp of his range and naturalness as KJ. Watkins slips easily into the skin of a man with marauding inner demons who is still capable of radiating the sunniest optimism and encouragement. His performance is nuanced enough to convince me that KJ could be the character Baker is most interested in.

But the true fireworks in The Aliens come from Jasper. In playing him, Matt Cosper tackles the biggest sustained acting challenge he has faced since he first came to my notice in the title role of Agamemnon back in his student days with the Children's Theatre Teen Ensemble. In the 15 years since then, Cosper has been most notable for the companies he's formed and the plays he's written and directed. Now with this expansive, self-dramatizing, utterly open and sincere Jasper, pretentious only in the enlightenment of his ambitions, we can at last point to an adult performance of comparable stature — with some rudimentary chops on guitar.

What I find so charmingly down-to-earth about Baker's realism is at the core of the Jasper-KJ friendship. Although they regard each other as geniuses, they are absolutely clear-eyed about how little they've accomplished. To achieve success in any of the endeavors they're interested in, they'll need to travel far from their little Vermont town to have even a chance of going far. That's probably why Evan's admiration means nearly as much to them as their acceptance, mentoring and encouragement mean to him.