PaperHouse Theatre's Cutting Comedy Asks, 'What About the Women?'

You say you want a Revolution?

While the kids are upstairs watching TV, the adults are in the basement plotting revolution.

It's a Thursday night at the south Charlotte home of Nicia Carla, artistic director at PaperHouse Theatre. One of the kids is her daughter. Two others belong to actress Shawnna Pledger, who is conspiring with Carla and cast members Caroline Bower, Lydia Williamson and Sarah Woldum to launch PaperHouse's latest project, the Charlotte premiere of playwright Lauren Gunderson's ferocious political comedy The Revolutionists. The production, which runs from October 5-22, will also be the first play staged at Goodyear Arts' new home at Camp North End.

With wicked wit and compassion, The Revolutionists examines the roles four women played in the French Revolution.

The other character, Marianne Angelle, is an invention of the playwright, Carla adds, a composite of several Haitian freedom fighters who tried to persuade the enlightened French revolutionaries that their lofty ideals of Liberté, égalité, fraternité (liberty, equality, fraternity) should apply to their slave colony as well as their motherland.

"The fun of this play is that, while it takes place in the French Revolution, it's so right now," Carla says. "The language is modern, and the way the women interact with each other is modern."

Charlotteans may be familiar with the work of Atlanta-based playwright Gunderson through Donna Scott Productions' Charlotte premiere of her crackling satire of American political gridlock, The Taming, in the spring of 2016. That show tackled how the Constitutional Convention of 1787 embraced dubious compromises that baked slavery and racism into our fledgling republic. The Revolutionists sets it sights on a target just as big: The corrosive effect extremism can have on the survival of democracy.

The French Revolution covered a tumultuous decade at the close of the 18th century, and was marked by divisiveness, violence and political paralysis. If this sounds similar to contemporary America, it's because it is, Carla says.

"[The play] is relevant," she says, "because at its heart, it's about how extremism is dangerous. The French revolution started with beautiful ideals. You can understand that people were struggling and hurting, and they wanted something different, but when you get to extremism no one is listening anymore. It's just an angry mob."

"This play is about then and now," she continues, "but it focuses on the true stories of brave, strange, hilarious and totally human women who are trying to change the world."

The actresses tasked with portraying these remarkable women are seated on folding chairs in Carla's basement sipping wine from paper cups, while our host offers me a macaroon. This is a rehearsal room and part of it is taped-off, marking the dimensions of the show's set. An antique writing desk sits center stage. It's an incongruously cozy setting to be discussing the infamous reign of terror, the spiral of madness France descended into as liberal reform curdled into autocratic oppression.

"Spoiler alert: Heads roll," Carla says. De Gouges, Corday and Marie Antoinette all kept their appointments with the guillotine, but graphic executions will not be portrayed in the production.

"We're not actually going to have the guillotine, even though it looms over the proceedings," Carla continues. Instead, the show will suggest "the moment of the guillotine," she adds.

Similarly, the assassination of Marat will be heavily stylized, says Sarah Woldum, who plays Charlotte Corday. The only characters onstage will be the four women, she adds, and Marat will not even be seen.

Corday was a most unlikely assassin, Woldum adds.

"She's this innocent and demure young girl, and then she murders someone horrifically, which seems a little incongruous." [Marat was soaking in a bathtub when Corday rammed a kitchen knife into his chest.]

"I really liked that — this feminine ideal of purity meets murder."

"She curled her hair before she went to the guillotine. According to one account I read, she made sure her bonnet was pinned on before the guillotine because she didn't want her bonnet to fall off when her [severed] head dropped." 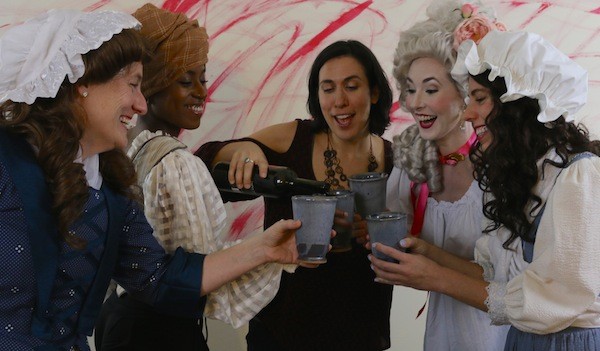 Like the rest of the cast, Woldum discovered The Revolutionists when she accepted an invitation to do a reading of the play at Carla's house.

"The script struck me," Woldum says. "It's just hilarious."

"A lot of comedy comes after you've been playing with the words, and [it's driven by] certain choices the actors make," she continues, "but with this play it was all there on the page."

Though Woldum loves her part, and appreciates that The Revolutionists is a show written by a strong woman for strong women, she admits that Marie Antoinette has some of the best lines.

Caroline Bower, who plays the deposed and imprisoned queen, will not dispute that, but she has other reasons for connecting with Marie Antoinette.

"Generally I like to find the good in people," says the actress who also teaches theater at Providence Day School. "So I love this piece because it humanizes Marie. She's just a woman, and she's funny as hell."

"She's extremely sweet and caring, and slightly out of touch," Bower continues. She adds that Marie Antoinette never says, "Let them eat cake," in Gunderson's play, but that she speaks about it.

"All the other women [in the play] are ragging on her for a while because she's [an aloof] aristocrat. She says, 'Give me a break. I didn't ask for this. I was forced to marry into this. All of this amazing stuff was given to me for free. What would you do? You'd take it, right?'"

"Marie is exactly what you expect her to be, and not at all," Carla interjects. "She's like all of us. There is the face we wear that people expect to see."

"[Marie Antoinette] can turn on with this extremely feminist royal lady power," Bower concludes. "I love to imagine that this [portrayal] is closer to who she was as a person."

"[The Revolutionists] depicts De Gouge in a moment of indecision." She wonders what she should do while revolution rages all around, Carla says, and if what she is writing is important in such an unsettled time.

"One reviewer thought [this portrayal] weakened her, but I disagree," says Carla. "Seeing her struggle with what to do doesn't take away from her strength."

"[The historic] De Gouges was full-on, in your face," Pledger says, "but I didn't have a problem with the way Gunderson wrote the character at all."

"This is all about the pieces of De Gouges," Pledger continues, adding there is room in De Gouges' character for doubt, reflections and forcefulness. "All of these things are going on in her mind so she can then go out into the world and be a badass."

"The tagline of this show is 'Four bad-ass women,'" Pledger says. "That sold me on it right away."

"In addition to being funny, it's a really powerful piece. [The play] has a strong message about creating your own reality, creating your own life, and what you want that life to look like. Because of all of those things I connect with it."

"The play is informative and true to the history," Pledger adds. "The pieces of history are in there, even though the actual meeting of these four characters is not true."

Another thing that is not entirely true is one of the play's most intriguing characters, the Haitian revolutionary Marianne Angelle.

In the text of the play, Gunderson touts the script's historical accuracy, says Carla, but it also admits to some minor revisionism.

All history can be seen as revisionist, suggests Lydia Williamson who plays Marianne Angelle. It all depends on who controls the narrative. 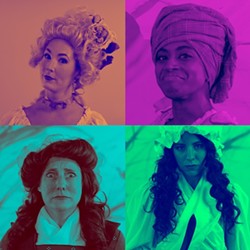 "There a beautiful line in the play where [Marianne Angelle] says, 'Don't burn your plays because no one writes about me," Carla interjects. "Of course there were [Haitian freedom fighters] like her, but we don't have records of people like Marianne."

"[This is] a play about feminism and revolution," Williamson says. "The story is about women taking control again. I say that because women are a big part of history, but they're just written out of it."

"That's what grabbed me," she continues. "It was women not only going through these struggles, but loving, living life and being women at the same time."

Not only is [Marianne Angelle] a badass, but she's also a mother who's bad ass," Williamson says. "Marianne is so interesting because she can handle both roles. It's a fine balance. She's very human and very feminine."

"We have this lily-white image of history, which is not accurate," she says. " Our world has always been much more layered and multi-cultural than we imagine it to be."

To bring this tribute to humanity, femininity and revolution to the stage, PaperHouse had to bid adieu to the Frock Shop, where they've staged their last three productions, and move to a bigger venue at Goodyear Arts at Camp North End. For that, the troupe had to raise $4,000 through Kickstarter.

"We were so pleased that we made our goal with Kickstarter," Carla says. "It's awesome, because I hate asking for something. But it takes a lot to put a show together."

"The past few years, being at the Frock Shop we haven't had to build a set because the house was the set," she continues. In contrast, Goodyear Arts' new locale is a great space, but PaperHouse has to bring everything in.

"For this show, there were some specific needs to get it done right. Marie Antoinette has to have a wig and a fabulous gown. She just has to."

PaperHouse has brought in Barbie Van Schaick to design period costumes, and they're also building a set. Jordan Ellis, who designed sets for PaperHouse's production of The K of D, an Urban Legend three years ago, returns to transport Camp North End to 18th century France.

"[Ellis] is great at being creative with a space, and with embracing its rough edges." To that end, Marie Antoinette's gown will be juxtaposed with the industrial vibe of Goodyear's converted warehouse digs.

"Jordan's digging into that instead of trying to pretend we're somewhere else," Carla says. "We're using the architecture of the space. The walls of the space are the walls of our set."

Carla also plans to use the lobby area for the production as a sort of information depot. She's reached out to Jennifer Quigley, who runs the website Help Out Charlotte.

"She tracks issues that I might not be aware of," Carla says.

Quigley will organize information for call-to-action issues throughout Charlotte, so audience members can sign up for causes that speak to them. PaperHouse also hopes to accommodate organizations that are looking for volunteers.

This call to action dovetails neatly with The Revolutionists message, Carla maintains. At a time when many in power seem intent on silencing women's voices, that message seems particularly pointed.

"This play tells you you're not alone," she says. "[So] get involved, and take a stand."

Bower adds that The Revolutionists urges women to be advocates for other women.

"If you feel that something isn't right, don't just sit in a room and talk about it," Bower says. "Get up and do something about it."

"I hope people see the show and think, 'This applies to me right now,'" Woldum says.

"Take this show and apply it to life," Williamson urges, "because it's about what's going on now."

Cloaked in quicksilver comedy and wit as sharp as the guillotine, The Revolutionists reminds us that women are powerful beyond measure, Williamson says.

"Yes," says Carla smiling. "The girls are definitely in the room."