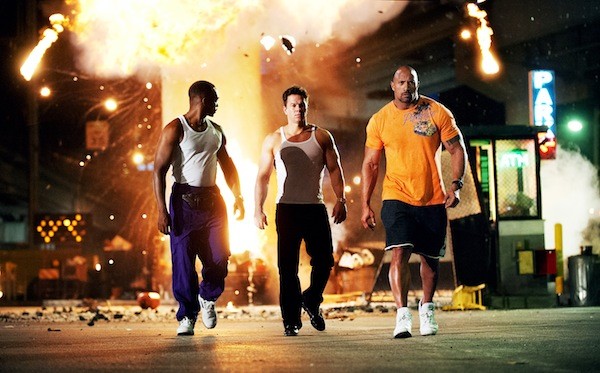 It appears that whenever Mark Wahlberg brings his world of hurt to movie marquees, audience members are the ones who will be left aching. Wahlberg's Max Payne remains one of the worst movies ever based on a video game — yes, let's take a moment to reflect on the enormity of that statement ... OK, let's move on — and now he's back as the top-billed star of Pain & Gain, one of those true stories that can be filed in the "stranger than fiction" cabinet. Pain isn't awful like Payne, but it represents a blown opportunity to make a movie that's worth its weight in box office admissions. And for that, the blame falls primarily on one man.

Michael Bay is, of course, the schlockmeister behind such works as Armageddon and the Transformers trio, so one can only assume he approached this decidedly less giggly material with visions of sugar-plummed Oscars dancing in his head. And why not? Movies about lowlife crooks shooting themselves in the foot (literally or figuratively) have enjoyed award runs in the past, with Fargo and GoodFellas being but two examples. The factual tale being related here, made famous by a series of articles Pete Collins wrote for the Miami New Times, is solid gold. Daniel Lugo (Mark Wahlberg) is a Miami bodybuilder who loves his body but not his lot in life, which entails a low-paying job working in a gym. After attending a seminar presented by motivational speaker Johnny Wu (Ken Jeong), whose brilliant advice is summed up by his motto, "Do be a doer; don't be a don'ter!" Daniel decides that there's no reason he can't enjoy the American Dream himself ... by stealing it from someone else.

Enlisting the aid of two other hunky lunks — Paul Doyle (Dwayne Johnson), an ex-con and ex-cokehead who has found Jesus, and Adrian Doorbal (Anthony Mackie), a steroid-abusing weightlifter whose habits have left him with penile dysfunction — Daniel sets his sights on gym patron Victor Kershaw (Tony Shalhoub), a sandwich-shop owner who worked his way up to riches and now treats everyone else with contempt. The plan is to kidnap Victor and torture him until he signs away all his assets — his funds, his house, his boat. But when it comes to doing anything right, Daniel, Paul and Adrian are even less adept than Moe, Larry and Curly, and the saga soon involves botched snatches, more hostages, an endless supply of dildos, severed hands roasting on an open grill and, sure enough, a murder or two.

Besides a head-spinning story, what Pain & Gain most has going for it is a superb cast. As a none-too-bright guy who tries to better himself in all the wrong ways, Wahlberg has rarely been better. I've been touting the talents of Johnson even back when he was still billing himself as The Rock (and most recently in February's Snitch), and he's very good here, ably filling out the character who goes through the most changes during the course of the story. Mackie's role isn't as meaty as those of his two co-stars, but he compensates by bringing plenty of nervous energy to his portrayal of Adrian. There's an attempt to muddy the moral waters by making the gang's victim a complete jerk who probably deserves what he gets, but Shalhoub takes such relish in playing the part that it's hard not to admire his wit (to say nothing of his survival instincts). To dilute the roster of reprobates on parade, there's the second-half introduction of a honest private eye named Ed DuBois, and the always-welcome Ed Harris brings a soothing demeanor to the role.

But these salient ingredients largely count for naught with the Pearl Harbor director at the helm. Not able to get out of the way of a promising movie, Bay, with the apparent support of scripters Christopher Markus and Stephen McFeely, smothers the project in the sort of juvenile hijinks we had hoped he would skip this time around: homophobia, misogyny, scatological humor and other ingredients sure to make a 13-year-old boy titter. It's not that sordidness should be absent from a sordid tale, but Bay loves to wallow in it — contrast this with even someone like Quentin Tarantino (hardly our most modest filmmaker!), whose latest feature, Django Unchained, centered on the atrocities of slavery yet still was restrained enough to not actually show one man getting his head hammered open and another torn apart by dogs.

Bay's immature streak goes even deeper than homo and bitch jokes: Rather than the attentive yet dispassionate stance that shrewd filmmakers employ when they don't want to condemn their immoral characters outright (think the title character in Brian DePalma's Scarface or Anton Chigurh in the Coens' No Country for Old Men), there's a sense that he's actually cheering these thugs on, never more obviously than in a climactic monologue in which Wahlberg's character proudly speaks about taking his best shot. There's no irony or self-awareness in the staging of this sequence; instead, Bay tackles it as if he were Spielberg filming one of Daniel Day-Lewis' earnest Lincoln speeches. It's an irritating moment and, as with the rest of Pain & Gain, viewers will feel the burn for a couple of days afterward.