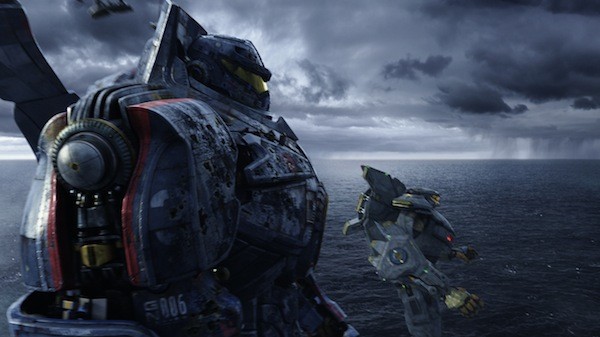 If imitation is indeed the sincerest form of flattery, then director Guillermo del Toro dedicated his latest film to the wrong people.

A title card at the end of Pacific Rim finds the Mexican moviemaker thanking special effects genius Ray Harryhausen and director Ishiro Honda, when he really should have been saluting Michael Bay and Roland Emmerich. This isn't to suggest that Pacific Rim is awful like Bay's Transformers sequels or Emmerich's ill-advised Godzilla update (the one where Matthew Broderick's tiresome stammering represents a greater threat to humanity than the monster's rampages). But Harryhausen (who passed away in May) was a hands-on FX artist whose incredible stop-motion creations can be seen in such fantasy staples as Jason and the Argonauts and The Golden Voyage of Sinbad, while Honda (who died in 1993) helped spearhead an entire cottage industry when he wrote and directed 1954's Gojira (aka Godzilla) and subsequently was involved with many of Toho Company's monster mashes. Harryhausen and Honda are cinematic gods to del Toro, no doubt about it, but the movie he has produced in their honor has less in common with their disarming flights of fancy and more with the assembly-line blockbusters that are becoming increasingly indistinguishable from one another.

The studio pitch was probably nothing more than "robots vs. monsters," and that indeed holds summer-film potential. At some point in the next couple of years (we know this because Obama is glimpsed on a TV monitor), gargantuan creatures ("Kaijus") will emerge from cracks in the ocean floor and begin leveling cities across the globe. As the mass destruction continues, all of the world's nations pool their resources to build equally massive robots ("Jaegers") to stop them. Each robot is inhabited by two humans whose minds are synchronized so that they can effectively control it.

Raleigh Becket (Charlie Hunnam) and his brother Yancy (Diego Klattenhoff) make up one of the most effective teams, but after they disobey a direct order from their commanding officer, Stacker Pentecost (Idris Elba), Yancy is killed by a Kaiju and Raleigh quits the biz. Years later, the Kaijus have again taken the upper hand in the endless war, and Stacker coaxes Raleigh back into the fold. But Raleigh will need a new partner, and he finds that the Force is strong in Mako Mori (Rinko Kikuchi), a rookie robot-jock with a backstory as tragic as his. 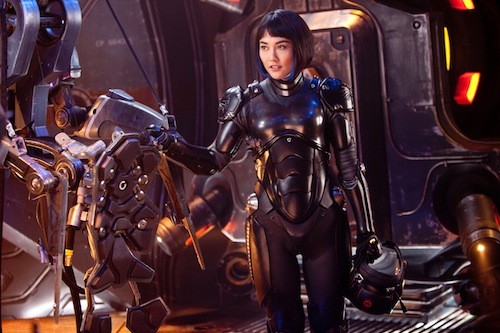 If someone tells you that they could have easily pegged this as a Guillermo del Toro film, of a piece with his past efforts, then they're lying. Like Tim Burton before he got swallowed by his own eccentricities, del Toro enjoys making movies that are informed by an off-kilter sensibility which brings out the children's-tale unease that rests at the heart of many sterling horror yarns: Pan's Labyrinth, Cronos, The Devil's Backbone and the Hollywood-sanctioned Mimic all tapped into this universal sense of dread, and even his Hellboy and Blade outings displayed similar flashes. Pacific Rim is the first film he's directed that feels like a for-hire assignment, a mercenary job done only for the sake of collecting a paycheck. What's bizarre is that this clearly isn't the case, given del Toro's affinity for this genre and the fact that he also served as co-writer (along with Travis Beacham, who gave us that underwhelming Clash of the Titans remake). Yet, in a sincere effort to honor his heroes, he instead does them a disservice.

The film's special effects are superb, but their frequent and coolly detached employment means that this is basically a CGI circle jerk, allowing for none of the intimacy we feel when marveling at Harryhausen's lovingly built models. As for Honda, his original Godzilla wasn't just a movie about a beast laying waste to Japan but also a deeply felt commentary on the evils of nuclear power, a touchy subject for a nation that less than a decade earlier had seen Nagasaki and Hiroshima decimated by the atomic might of Fat Man and Little Boy. That movie remains a source of debate and contemplation; by comparison, the only question with which viewers of Pacific Rim will be forced to wrestle is whether to buy the concession popcorn with or without butter.

Most moviegoers don't head to fantasy flicks on the basis of star power, but is it too much to ask that the protagonists exhibit even just a particle of personality? Emmerich at least had the sense to cast the charismatic Will Smith in Independence Day, but Hunnam brings to mind Battleship's Taylor Kitsch, TRON: Legacy's Garrett Hedlund and other bland, pretty-boy leads. Elba, on the other hand, is a magnetic actor — I especially enjoyed his commanding presence in last summer's Prometheus — but it's impossible to take him seriously here, given that he's been directed to SHOUT! practically all of his hoary dialogue. Charlie Day and Burn Gorman, cast as two bickering scientists, are along for strained comic relief, and their interludes will delight anyone who misses the banter between Shia LaBeouf's Sam Witwicky and his odious parents (Kevin Dunn and Julie White) in the Transformers series. Faring best are Kikuchi, the Oscar-nominated Babel actress who hopefully will start landing more stateside work, and del Toro favorite Ron Perlman, nyuking it up as the rough-and-tumble black-market profiteer Hannibal Chau.

As noted, the effects are excellent, although too much of the action takes place at night; as a result, we often can't (to paraphrase Lon Chaney in The Phantom of the Opera) feast our eyes and gloat our soul on the monsters' accursed ugliness. Still, even through the dim lighting, it's clear that del Toro understands spacial relations far more than Bay ever will, given that the battles are for the most part cleanly staged and easy to follow. As far as catching the movie with any bells and whistles, the 3-D is (as is usually the case) negligible, but the sound — at least in IMAX — is incredible, recalling the thrill when we first witnessed Spielberg's dinosaurs lumber across the screen back in '93.

In short, viewers who care only about the fights and can ignore great stretches of tedium will lap this up like a dog discovering spilled gravy on the linoleum floor. Everyone else, though, will find themselves caught up in a sea of apathy.