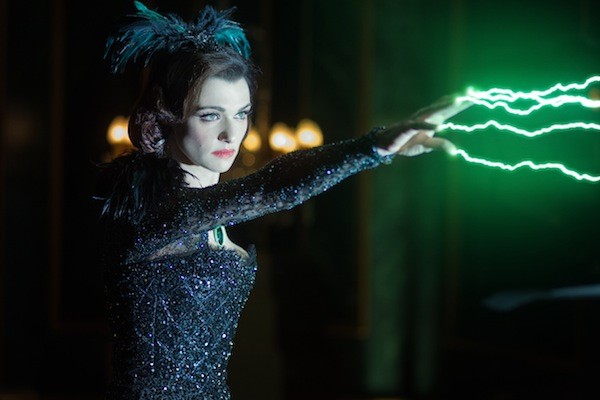 In the immortal 1939 classic The Wizard of Oz, the Scarecrow sings "If I Only Had a Brain" ("My head I'd be scratchin', While my thoughts were busy hatchin'"), the Tin Man croons "If I Only Had a Heart" ("I'd be tender, I'd be gentle, And awful sentimental") and the Cowardly Lion belts out "If I Only Had the Nerve" ("Yeah, it's sad, believe me, missy, When you're born to be a sissy"). Those three interlocking tunes might have easily served as the theme song to Oz the Great and Powerful, a portrait of plasticity that could have benefited from more intelligence in its narrative structure, more feeling in its characterizations and more courage to break away from the generic, one-size-fits-all strain of blockbuster that's been draining studio coffers as of late.

Unlike such financial bombs as John Carter, Battleship and the recent Jack the Giant Slayer, this Oz prequel will likely be a box office champion — parent company Disney is obviously hoping for grosses to match those of its 2010 offering Alice in Wonderland, Tim Burton's occasionally magical but more often misguided reworking of a beloved fantasy franchise. The 3-D effects in Oz easily trump those in Alice (remember, that film was shot in 2-D and then converted once the 3-D craze took hold), but in most other regards, this new picture can't even match the modest triumphs of that overstuffed soufflé.

In a nice nod to the 1939 original, Oz the Great and Powerful opens in black-and-white, with a boxy 1.37:1 image (what was used before the widescreen era began in 1953). The setting is Kansas, and the traveling magician Oscar (James Franco), known as Oz to his friends, is busy wowing the locals with his sleight-of-hand show and wooing the ladies who catch his eye. When a circus strongman reacts with rage in the aftermath of one of his conquests, Oz elects to hightail it off the ground in his trusty air balloon, leaving behind his put-upon assistant Frank (Zach Braff). The magician gets caught in the middle of a fearsome tornado and ends up in the color-saturated, widescreen world of Oz; there, he meets a kindly witch (Mila Kunis) who's convinced that he's the great wizard who's come to save the land from the machinations of a wicked witch. Aware of his own limitations but also learning about the kingdom's vast treasures, he pretends to be a real wizard, a claim met with suspicion from the sorceress' equally powerful sister (Rachel Weisz). Oz sets off to kill the wicked witch, and his adventures place him in contact with a flying monkey named Finley (voiced by Braff), an animated porcelain doll called China Girl (voiced by Joey King) and yet another witch (Michelle Williams). 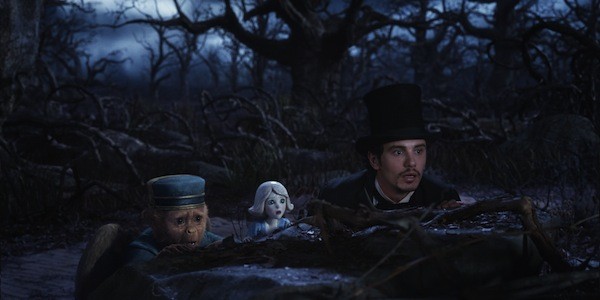 From the 1939 chestnut to the modern stage smash Wicked, works based on the properties of author L. Frank Baum have tended to present their female characters as smart, headstrong women ultimately responsible for their own fates. Therefore, it's a bit disconcerting to see how in this film, they're all small moons orbiting around Franco's Oz — in fact, the lothario's base treatment of one of the witches is what fuels not only the majority of this movie but also Dorothy's subsequent saga as well. Scripters Mitchell Kapner and David Lindsay-Abaire do add some clever shout-outs to the original film, but they're all inconsequential and can't overcome the banality of the central thrust, which involves usual tropes like mistaken identities and the need for a nuclear family.

I've been a Sam Raimi fan ever since seeing The Evil Dead on a bootleg video back in the mid-1980s, and he's made me proud with such triumphs as the acclaimed thriller A Simple Plan (a movie in dire need of discovery) and the crackerjack Spider-Man trilogy. So it's crushing to see how much the director has sold out here: The only ingredient that makes this bloated mess recognizable as a Raimi flick is the presence of his old buddy Bruce Campbell, who's appeared in most of his films ever since they made The Evil Dead together. Yet even the presence of Campbell — in a tiny role as a palace guard — works against the film, since it conjures the thought that he would have made an excellent Oz. Campbell has already played a con man (Autolycus, the King of Thieves) in the TV series Xena: Warrior Princess, and his hucksterism qualities and way with snappy patter were also seen in the Coens' The Hudsucker Proxy and Raimi's Army of Darkness, to name but two. As Oz, he would have been an unqualified success.

Unfortunately, Campbell isn't a marquee name to the masses, so Franco was handed the role. He's not terrible in the part, but he's not exactly inspired, either. His Oz is more off-putting than should be the case — he's so lecherous, I expected him to start hitting on the childlike China Girl at any moment — and there's no hint of Frank Morgan, who played the Wizard in 1939, in his performance. When Ewan McGregor portrayed Obi-Wan Kenobi in the Star Wars prequels, he took care to adopt Alec Guinness' careful enunciation and floating cadences to provide viewers with a recognizable throughline so they could link the two characterizations; in the same way, Robert De Niro's brutal Vito Corleone smoothly morphed into Marlon Brando's older, wiser but still deadly Don in The Godfather flicks. Franco's turn is so divorced from consistency that he might as well be playing a younger version of Jean-Louis Trintignant's concerned husband Georges in Amour or Frank Langella's Richard Nixon in Frost/Nixon — it's a disengaged performance that's only slightly more grounded than his hosting stint on the Oscars.

As the three witches, only Kunis is given a character that has any sort of arc, even if it isn't a very believable one. Weisz provides some zest to a cardboard role, while Williams can't be anything but dull in her drowsy part. As the chattering monkey Finley, Braff is made to sound more like a character from a Shrek movie, given the contemporary edge afforded his character's dialogue. The same degree of modernity can be found in Tony Cox as the dour Munchkin, Knuck; Cox, hilarious as Billy Bob Thornton's profane partner in Bad Santa, perpetually seems on the verge of slipping back into that movie's character, and I half-expected to hear Muck bellow, "Oz, you stupid motherfucker!" Such an outburst wouldn't have provided the movie with any more of a brain or a heart, but at least it would have shown some measure of nerve in a production that's about as challenging as skipping down a brick road.

Oz The Great and Powerful in 3D