Lost in the sauce at build-your-own pizza spot

To walk into Zablong Pizza during the lunch rush is to see artistry at work.

The line can be intimidating, as it may very well fill the entire front of the small space, but it winds down fast as employees quickly build each customer's pizza from scratch and toss it in the oven.

The Brevard Court lunch spot has served much of the Third Ward office building crowd since opening in January. Looking ahead, though, co-founder Steven Young said he wants to expand the build-your-own pizza spot into different locations throughout Charlotte.

Creative Loafing caught up with Young to chat about Zablong's personal-pizza-only approach and how that doesn't stop it from being the most #shareable in town. 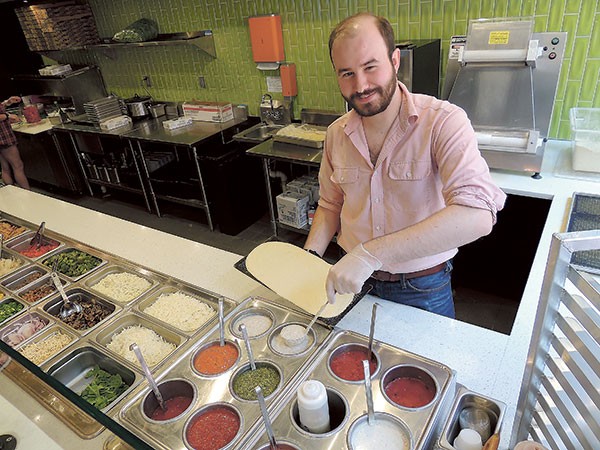 Steven Young: The biggest starting point is obviously that we're a fast pizza place that isn't selling you slices. We're doing one thing in one size only and it's in a slightly nontraditional shape.

The next major thing is our sauce selection. You go to a pizza place, you expect to get a tomato sauce, maybe they'll have some kind of white sauce, the cool places that are fancy might do a California type or barbecue, something like that. We said, 'let's do everything and all of it.' We do nine sauces and sometimes more if we bring in a special. Yeah, I can do tomato sauce and we make a great pepperoni pizza, but we think, 'let's make a cream of spinach based thing and start from there and then do what you want.'

How does the build-your-own aspect help?

It's a benefit in a lot of ways, but it's also hugely important to the message that we want to send. If I go to any other pizza place, no matter how high end or whatever, if I don't see what's put in front of me, all I can put on the menu is a list of words people are used to. I know what a pepperoni pizza is going to be. We set out to be different, to do something out of that ordinary. What if you put ghost pepper salami on a menu and you couldn't see it until it came out? I would have trouble as a customer saying, 'What is that going to be like?' Here we can say, 'It's a cool little extra bite that's not super spicy, you want to try it?' You can try it right in front of us.

If I came in with a traditional place that's mass market and said, 'We're going to do a mushroom truffle sauce,' people don't know how mushroom and truffle goes, is it chunky? Here, it's in front of you, you can see it.

How does social media and self-expression play into the experience?

We love it when somebody uses our built-in camera on the wall and sends us a photo. We put in a touch screen instead of traditional TVs. We're not about broadcasting down to you, even if it's muted ESPN or whatever, we're all about interaction. That was the guiding principle when we put together this concept. Every choice we made was about that. Our tabletops have a glass surface and we leave dry-erase markers on our tables so that if you're sitting around for a minute or just want to leave a nice note, we try to take photos of the best little notes. "Wonderful pizza. Great stuff. I love Zablongs. We'll be back." Or if you just decided to do art. Interaction was just the guiding light. I could sit there and send out marketing messages all day every day and that might benefit some people, they might enjoy what we have to say, but we're really more about providing a place for you to talk about what we do, or a place to share a photo of your creation. No matter how many times I hire a photographer, I'm not going to get John's favorite pizza.