Behind the scenes at Charlotte's favorite comic book shop

I know, I know: You hate comic books.

The merest mention of those superhero-heavy, saddle-stitched periodicals undoubtedly causes you to roll your eyes and think, "Nerd alert!" 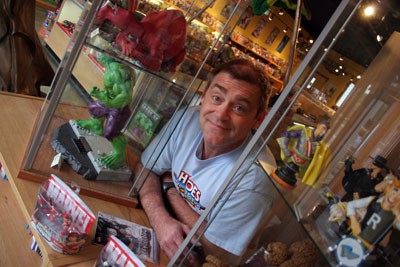 Let's face it -- no one wants to be the guy still living in his parents' basement with comics as his only social interaction, reminiscent of The 40-Year-Old Virgin. No one wants to be considered childish, immature or, quite frankly, a geek.

Well, get over it.

You know that somewhere in the skeletons of your past (and in your mom's attic) lays a tattered old issue of Archie. And this weekend you'll definitely be dropping $8.50 on the new Spider-Man flick. The fact is -- whether your inner child is peeking over your shoulder, nudging you away from cynical adulthood or simply because you recognize that a small subculture in American history has become something large and mainstream -- you can't escape comic books. Be they the antics of Donald Duck or the deep brooding philosophies in Neil Gaiman's Sandman, comic books have become a permanent fixture in our daily lives, in one form or another. Even if you haven't picked up a well-drawn tome in years, you're sure to have turned on a TV or watched a movie in the last year or so. Examples? Heroes (the superhero-inspired weekly drama) is must-see TV on NBC. Sin City and 300 are both adaptations from -- say it with me -- comic books.

And if you find yourself intrigued by the idea of being "in the know" before Hollywood grabs another copyright, there's a place for you: Heroes Aren't Hard to Find. A decades-old, Charlotte-based comic book shop, Heroes bridges the gap between your fear of all things geeky and your love of all things cool.

Enter HEROES on any given day, and you're greeted at the front door by a life-sized drawing of Mary Jane Watson (Kirsten Dunst's character in the Spider-Man movies), a word balloon above her head quipping her trademark, "Face it, tiger. You just hit the jackpot." Inside you'll find the employees of Heroes Aren't Hard to Find on the move. The day I visit, I spy the shop's owner Shelton Drum helping a female customer in need of two graphic novels. As a Christopher Reeve-era Superman movie plays on a TV mounted to a corner of the high ceiling, afternoon employee Shawn Reynolds doesn't sit still, either. Her blond hair neatly pulled back into a ponytail, she smiles and simultaneously answers the phone and rings up a customer.

The stereotypical image of dark, cramped dungeon-esque comic book stores full of pimply overweight guys haunts the comic book industry. Remember the Comic Book Guy from The Simpsons? You won't find him behind the counter at the large, airy Heroes. Instead you'll find the yellow walls covered with vintage comic book cover posters, rows of glossy comics and smiling employees who won't ridicule you for not knowing the exact issue in which Wolverine joined the X-Men.

Drum founded this four-color Mecca because he was a fan first. A former art major at UNCC, he knew he wanted to do something with comics. And he knew that there was an interest in comics in the Charlotte area from trading his beloved books at the Metrolina flea market. Twenty-seven years ago, he signed the lease for his little endeavor on Central Avenue. Nearly three decades later, the location of Heroes has jumped around the Plaza-Midwood area before finding its current niche on 7th Street. Heroes is now in a building that once housed a dance studio and a wine shop. Painted grapevines are still visible on the sides of the brick building, and Drum says that when he first tackled the enormous job of renovation, the floor was still a "bouncy and squishy" dance floor.

Having an older building with such a high ceiling gave Drum the freedom to creatively find a place for the thousands of back issue comics and merchandise he has for sale. Drum says, "I enjoy [the shop] being part museum." 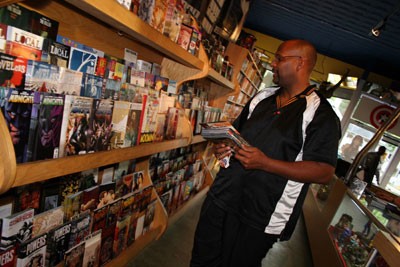 Look up as you enter the building -- the first thing you'll see is a larger-than-life Dr. Octopus battling Spider-Man. (Old school green spandex Doc Ock, not flashy, faux-six-pack-abs Alfred Molina from Spider-Man 2.) The Spidey figure kneels on top of a glass display case, his fingers rocked out to send a stream of glossy web at one of Doc Ock's multiple silver tentacles. The two figures are paused in the middle of an epic battle. (Insert your own onomatopoeia here.) Pretty cool décor, right? Even cooler, Drum says, is the true purpose the figures serve.

"It was my son's idea," Drum boasts, placing a hand on one of the silver tubes. "When we were installing [the wiring for the building], he said the material looked like Doc Ock's arms." Ten-year-old Winslow's idea allowed Drum to run wires to the computers on the countertops, to the mounted TVs in the corners and the speakers for the store. See, kids? Reading comics makes you smart.