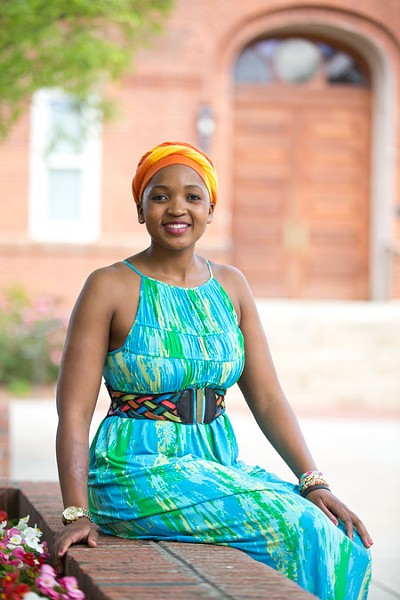 Mpumi graduated top of her class from the Oprah Winfrey Leadership Academy for Girls, in South Africa.

Some might say Nompumelelo "Mpumi" Nobiva was born lucky. As a gangly 13-year-old, she managed to convince Oprah Winfrey and Gayle King that she was an "It" girl. Now 20, the Johnson C. Smith freshman gigglingly confesses, "I don't know what I came up with; I didn't even know what that meant!"

Tall and athletic, sporting Nubian knots and a bright shrunken leather blazer, Mpumi exudes the kind of energetic confidence of a young woman accustomed to attention. If she was unsure of her "it" status then, there's no doubt about it now.

Whatever she came up with sufficiently impressed "Mom O": Mpumi was admitted to the inaugural class of the Oprah Winfrey Leadership Academy for Girls, which opened in 2007 in Henley-on-Clip, South Africa, and graduated last year at the top of her class. It was all part of a communal expectation for Mpumi, whose name means "success" in Zulu.

"People weren't surprised to hear that I got in," she says matter-of-factly, without a whiff of arrogance. "They always said, 'Mpumi is going to do big things,' so in a way it was just the next big thing I was doing."

That expectation of success may come as a surprise, looking at her background. She grew up in Rosettenville, a suburb of Johannesburg plagued by prostitution, drugs and hijackings, and lost her mother to AIDS when she was only 9. But she had the strong support of her community, including a very active church, and a champion of a grandmother to rely on.

Vivian Nobiva, 70, worked as a domestic in Johannesburg to make ends meet while raising her precocious granddaughter. "I am a domestic worker and do seasonal odd jobs," she told The Star, a South African newspaper. "Looking after my family was not easy because I earned and still earn a little money. But through the grace of God we managed to survive."

Getting into Oprah's school is notoriously rigorous. The institution's website states that applicants must come from families making less than $8,000 rand, or $855 U.S., a month. Beyond the initial academic entrance tests, Mpumi had to pass "endless" interviews to determine leadership potential, more extensive testing, and final selection camps that culminated in an interview in which Oprah asked the potential students to explain what made them "it" girls.

"It made us all bond like sisters," she says, "but it was intimidating. All your life, you've been the smartest girl in the room, and now here you are, surrounded by hundreds of other girls just as smart or smarter than you are."

Periodic controversies have dogged the academy. The $40 million price tag of the campus caused a backlash — critics said it was too luxurious — prompting Salon.com's Rebecca Traister to write that such a response "reflects our own beliefs that the bare minimum is all poor (black) girls need." In 2010, a female school staffer was acquitted of sexual abuse charges, despite the testimony of nine students. Winfrey, who'd hired a team of private investigators to work with South African police (and has publicly acknowledged her own experiences of child abuse), reportedly cried at the news, and released a public statement that she was "profoundly disappointed" with the verdict. And in 2011, the body of a newborn was found in an underage student's backpack — she allegedly gave birth to the baby on campus.

Mpumi is unruffled by these controversies. "You hear about these things," she says carefully, "but the administration contains them so quickly, we know about as much as anyone reading the news."

All of her class's 160+ students went on to higher education, either in South Africa or the United States. Johnson C. Smith, in west Charlotte, was one of the schools recruiting. International students make up about 10 percent of Smith's population, and the school's president, Ronald Carter, helped relatives of Nelson Mandela gain admission to U.S. schools in the late 1980s. Carter offered students of Oprah's school five scholarships, but only Mpumi and one classmate, Chando Dolomo, are currently enrolled.

So, why Smith? Mpumi cites the legacy of the historically black university, founded in 1867, and its religious affiliation with the Presbyterian church. Mpumi is majoring in interdisciplinary studies with a concentration in political science and international business, and is a budding photographer who gushes over Charlotte's architecture. Adjusting to the States has not been hard, she says; rather, becoming comfortable in her own skin has been her focus.

"When I first decided to come to the States, I worried that I would have to change to fit in. I would have to dress differently, I would have to look like Beyonce, maybe get a weave," she says, smirking at the memory. "But the more of the world I expose myself to, the more I learn about myself. I think the more I even look like myself. I never imagined I could wear my hair this short and have people — strangers — tell me how beautiful it is."

She says when she finishes her studies, her main goal will be to return home to South Africa.

"I could stay here in the States and be successful, make money for myself, but that would be failure," she says. "I want to show other girls like me that you own your body, you own yourself, you own your own potential. If I can make a path for them, like one was made for me, how powerful would that be?"