One Derails, The Other Sails | Features | Creative Loafing Charlotte

One Derails, The Other Sails 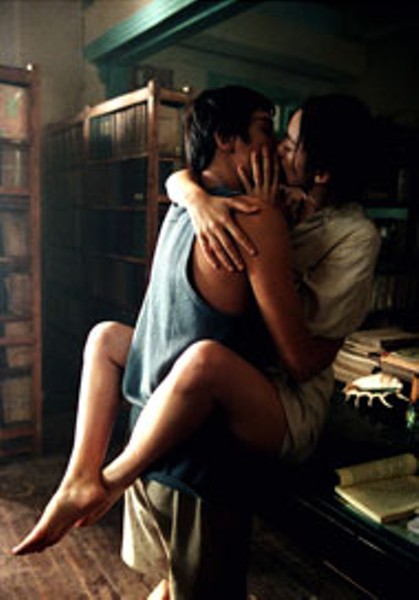 Fu Jun & Peng Xiaowei / Sony Pictures Classics GET IT ON, BANG A GONG Tony Leung Ka Fai gets wrapped up with Gong Li in Zhou Yu's Train
As Anna Karenina taught us, doomed love affairs and trains definitely don't mix. The Chinese film Zhou Yu's Train certainly subscribes to that deadly equation in this Instant Romance (just add tears) about a woman, a man... and a locomotive.

Zhou Yu (Gong Li) meets and falls in love with struggling young poet Chen Qing (Tony Leung Ka Fai), but she is soon obliquely rendered loopy by their affair. Perhaps it's the fatigue that makes her come undone. The determined, eros-drunk girl travels constantly by train for rendezvous with her lover, who probably could have shared some of the commuting burden.

Their romance is initially as perfectly actualized as a paperback cover: Chen dedicates poems to Zhou that invoke lakes and eels and other watery metaphors for passion. And Zhou, who supports herself painting porcelain vases, offers to spend her hard-earned cash so that Chen can publish his poems.

But the rules of the Women Who Love Too Much genre demand that all perfect affairs erupt in venereal cankers. That day of reckoning arrives when Zhou secretly outfits Chen with a beeper and interrupts his writing with a Nokia tone. The end is thus near, though unfortunately not by director Sun Zhou's reckoning, who prolongs this love affair's death throes to its final, painful twitch.

At her wit's end with love suddenly unrequited, Zhou begins to seek the counsel of gregarious veterinarian Zhang Qiang (Honglei Sun), who also takes the train. In yet another of Sun Zhou's wall-to-wall cliches, a romantic triangle is formed.

Some may wonder if there isn't a fourth wheel, too: the locomotive, which figures prominently in the drama. Penetrating tunnels and clickety-clacking down the tracks, the purposeful, powerful, self-actualized locomotive gives its human costars a run for their money. With their feeble, finger-biting passion and tendency to lapse into slow motion when the going gets tough, the humanoids are easily upstaged by the choo-choo, which invests its passage with Oscar-worthy subtext.

And just to confuse matters further, Gong Li (Farewell My Concubine, Raise the Red Lantern) plays a dual role, as both Zhou and a woman with cropped hair observing the trio's complicated relationships in flashback. But the mystery woman's relevance to the characters is as ambiguous by film's end as it is in the beginning.

Zhou Yu's Train may be meant as some epic, Tolstoy romance, but it's the most chaste, abstract vision of eroticism imaginable, like something dreamed up by a teenager who has never actually experienced adult passion.

Since Otar Left, a French production set in the former Russian republic of Georgia, treats the other side of emigrant life: those people -- often old, often female -- left behind, who wait for letters, money and a keyhole glimpse into life on the other side.Otar is a Georgian doctor who has left his 90-year-old mother, sister and niece behind in a cramped Tbilisi apartment and now survives on construction work in Paris. He sends home letters to his Francophile mother, who kisses each one as if she were making contact with her son's own skin.

In so many details, director Julie Bertucelli's impressive feature film debut refuses to take the sentimental road, even down to casting. Rather than some sweet, apple-faced old lady, Otar's mama, Eka (Esther Gorintin), has a slightly gnomish quality, hunched posture and a head of white, cottony hair. Like the willful, vividly drawn matriarch of The Mother, this granny is shrewd and purposeful, but terribly human and dignified, too. She paints her nails a pretty dark red in anticipation of a reunion with her son. And she angrily berates a neighbor who trespasses in Otar's room.

Otar's escape to the West exacerbates tensions between Eka and his sister, Marina (Nino Khomassouridze), a cynical, aging beauty who lives in her brother's shadow. Marina simply can't compete with a son who has always done right and is recast once again as the family's hero and savior.

It turns out that Otar was not the first to leave. Marina's soldier husband died in Afghanistan. And like so many whose quota of tragedy has been exceeded, Marina has become slightly mercenary in her dealings with the world. Her joy evaporated, she decides to simply survive instead. But the one thing she can't bear is to see that hopelessness seep into her mother. So when Eka's one remaining chance at happiness, Otar, dies in Paris, Marina convinces her daughter, Ada (Dinara Droukarova), to keep it a secret from Eka.

Disappointment courses through these characters' veins. And it defines their surroundings, from the skeletal, decaying apartment towers framed against a somber gray dawn to Marina's occupation in an enormous open flea market where bit-by-bit, she sells off the family's belongings. Hardship has picked all of the meat off this place, leaving nothing but bones. The one antidote offered, which Bertucelli treats with exceptional grace, is family, as demonstrated in the tenderness exchanged between literature student Ada and Eka.

Otar is also about a country left behind. The Soviet Union, which once promised global power and state protection to its constituents, is now squalid and abandoned as its most adventurous citizens flee for the West. When Eka has a heart attack, the family rushes her to the hospital where they find a doctor calmly wrapping up his chess game before he helps them, and then doing everything but hold out his hand for payment. Capitalism has no clear trickle down here, where the electricity routinely flickers off and phone service is sporadic. As in this year's Good Bye, Lenin!, there is a pervasive melancholy to the collapse of communism. It may not have offered its citizens much in the way of a better life, but its leaders promised at least the pretense of paternalism and ideals worth believing in.

Marina's boyfriend explains to Ada that her mother comes from a disappointed generation, and she would be wise not to follow in her footsteps. By the end of the film, Ada has decided not to, but that decision is bittersweet, illustrating once again that with every escape, someone is left behind.

Zhou Yu's Train and Since Otar Left will be presented as part of this month's Charlotte Film Society series, which begins this Friday at the Manor. The other featured titles are Donnie Darko: The Director's Cut and Noi. For details, go online to http://charlottefilmsociety.com or call 704-414-2355.