Notice all the big-name DJs coming to town? They're sapping the homegrown scene 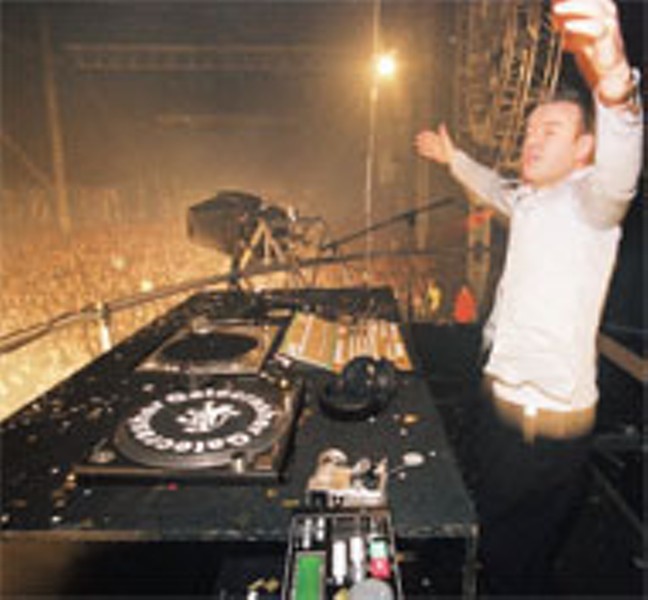 Paul Harness Oakenfold in his prime, playing to the massive crowd gathered at the 1999 Gatecrasher Festival in England.
From the outside, it might seem that the Charlotte dance scene is thriving, particularly if you're judging from the big, brand-name DJs making their way through town this summer. The list reads like a K-TEL 90s dance compilation: Josh Wink, Junior Vasquez, Keoki, the Crystal Method, Danny the Wildchild, Kimball Collins, Sasha. The exclamation mark comes this weekend when pioneering British DJ Paul Oakenfold's big package show, Perfecto On Tour, rolls into the Queen City.

You could call it the Monsters of Trance tour, thanks to acts such as Ferry Corsten, Sandra Collins, Armin Van Burren and Hernán Cattáneo, although appearances by Fergie, Deep Dish and the rock-oriented artists Junkie XL and Liquid Todd offer a bit of variety. (Hernán Cattáneo and Liquid Todd join Oakenfold on his swing through Charlotte.) But this show is as noteworthy for what it says about the current state of dance, both in Charlotte and beyond, as for the music being made. It's a case of surfaces being deceiving.

Oakenfold certainly was a tremendously important figure in the growth of dance music in the U.K. He started in the late 70s, a teen playing a rare groove and soul night at a basement wine bar. In the 80s he worked as an A&R rep for several rap labels (including Def Jam), during which he signed Jazzy Jeff & The Fresh Prince and Salt 'N' Pepa.

In 1987, spurred by a visit to the hip Spanish island of Ibiza, Oakenfold dove more deeper into his passion for DJing, and started several dance nights in which he introduced a mix of house, soul and Italian disco. But it was Oakenfold's work producing the British dance-pop band Happy Mondays that catapulted him into Euro- pop stratosphere. That led to his production and remixing work for a variety of acts, from U2, New Order and the Cure to Arrested Development and Snoop Dogg. In the mid-90s Oakenfold began releasing mix CDs, and in 2002 he put out a full-production LP, Bunkka, which folded his rock and hip-hop interests into his dance aesthetic.

There's no denying Oakenfold's influence on the post-rock music world, but many would argue he's been coasting on his reputation for years. In fact, most DJs have been riding the momentum of attention earned prior to the early 2000s, when electronica's press-fueled hype bubble burst. The big-name European DJs have been the biggest publicity carpetbaggers. Living in countries as small as states, with newspapers that rabidly follow the scene, these DJs have been able to parlay their cloistered publicity into huge American guarantees.

"They've got this great infrastructure — management and agencies and record companies going, 'OK, let's go to America,' and they come with this team and they say, 'We've already been successful here,' and because of that, they have the money to hire great PR people," says American DJ Chris Fortier.

The cost of such high-profile shows in cities like Charlotte is enormous, and it places great stress on clubs competing for patrons, one reason so many local clubs have had trouble staying open. It's a case of Mutually Assured Destruction — if you're in the game, you'd better have the names.

"You always have to strive to do your best and stay on top and continue to re-invent yourself," says Charlotte DJ Andy Kastanas, who co-owned the club Mythos before it closed its doors last year. "My theory always has been to do the best that I can and not expend negative energy to worry about what the other guy is doing."

Kastanas, who agreed to an interview via e-mail, continues to promote and spin in Charlotte, and recently brought Junior Vasquez to town. Kastanas is one of a couple promoters responsible for bringing big acts to town years ago.

"Not only are these risky and expensive ventures, but very few promoters have the contacts, reputation and ability to pull off these large shows," he says. "These big names don't just play for the money, so that is not enough to be a good promoter. These guys play for the passion of it, and if they can't find it where they know, they just won't play."

Part of the problem is that bringing big-name spinners doesn't really boost the scene, especially how it's currently situated, with much of the action occurring uptown. What was once a thriving scene, Kastanas suggests, is now more flash than substance.

Buddy Daigler agrees. The DJ and local promoter who's bringing Keb Darge to town this weekend (see Music Menu), points to Charlotte's growth as a driving force in the change.

"With the banking industry and the big corporate industry in downtown Charlotte, a lot of the clubs cater to more the mainstream... the trance and progressive trance line," he says. "And it's usually more the higher-marketed names, people from Europe who are very popular. That scene is a lot of the 9-to-5ers and people from the surrounding communities who drive nice cars, dress well. That's the kind of clientele they're after.

"There's a niche market of locals outside the beltline that have been doing events, some that are small and some larger," Daigler adds. "A lot of the underground events are spread by locals on e-mail lists. That whole downtown area is what gets the press and on the radio, whereas your smaller markets — drum'n'bass and progressive house, hip-hop artists and underground music — are smaller events."

The big shows, such as the one Oakenfold is bringing in, don't offer much succor to the scene.

"Maybe the opposite," Kastanas warns. "It is good for local DJs who are here who get to open for these guys, but it doesn't do much for them otherwise."

While smaller niches do have some following, exposure is limited, which doesn't encourage bookings by the larger uptown clubs. But Kastanas isn't without hope for energy in the future.

"Historically, everything is cyclical," he says. "The underground scene doesn't really exist much anymore, (but) that doesn't mean that it won't make a comeback. Eventually someone will say, 'Enough of this,' and start something."

Paul Oakenfold brings his Perfecto tour (with Hernán Cattáneo and Liquid Todd) to Velocity at 9pm Thursday. Tickets are $25.