NoDa gets crafty with Growlers Pourhouse 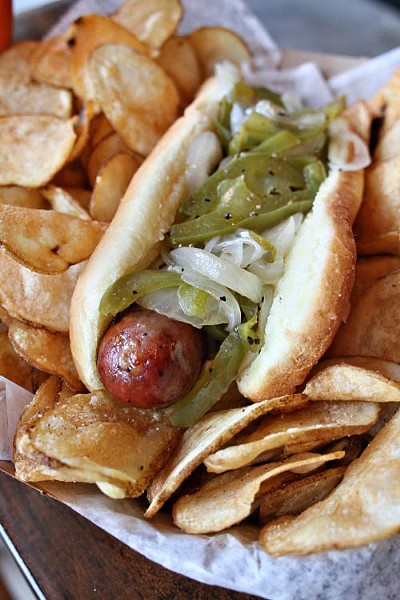 "NoDa is the 'authentic' Arts District," says Jeff Tonidandel, co-owner of two NoDa eateries: The Crêpe Cellar Kitchen & Pub and Growlers Pourhouse. I have to agree with him. This is not to say that the Bechtler Museum of Modern Art is anything but a stunning addition to Charlotte. Rather, NoDa is the place more likely to be where the art, music and creativity that may one day fill a museum or performance hall begins.

Last August, Tonidandel and his business partner Paul Manley opened Growlers Pourhouse, devoted to handcrafted beer and the food to match. A growler is a 64-ounce glass jug container used to tote beer. The name is descriptive: As carbon dioxide escapes from the container, it "growls."

Adjacent to The Crêpe Cellar, Growlers' interior is exposed brick and concrete with front glass windows. All of this contributes to the sound intensity, a problem the owners have been trying to address with acoustic absorbers. Multiple televisions give the appearance of a sports bar, and, in fact, Tonidandel says his Cellar side is more of a "date place." While it may be true that Growlers is a better bar than a restaurant with a sense of occasion, the kitchen has perked up a bit recently with the addition of grilled sandwiches.

Growlers' kitchen and culinary team is shared with its sibling establishment, but the menus are distinct. At Growlers, the focus is on foods paired with beer: sausages, sandwiches, cheese dips and oysters. The latter may be more of a surprise since wine — specifically Champagne — is the preferred pairing for these mollusks. But Manley is also a partner in Pearlz Oyster Bar, a restaurant within the TBONZ Restaurant Group, which has an established relationship with seafood vendors. Currently, Growlers offers oysters from North Carolina (oyster season here begins Oct. 15) and oysters found along the U.S. and Canadian Atlantic coast.

Growlers serves up an array of craft beers with 13 on tap and a choice of three seasonal beers. Tonidandel, who used to spend much of his time selecting the wines next door, now devotes that energy selecting beers here. Included on his list are harder-to-find craft beers like Smuttynose, Bell's, and Bear Republic. Last month during the Day of the Dead season, Dead Guy Ale (like a Maibock) with the skeleton on the bottle proved popular. Among the beers is the retro PBR (Pabst Blue Ribbon) — the "neighborhood beer," Tonidandel says — and they provide the glasses. (Expect to see more American heritage beers around town; this is a national trend.) Also on hand is Uncle Scott's draft root beer — a wonderfully flavored, western Pennsylvania styled, locally made soda.

All the sausages are made in-house except the chipotle vegan sausage. Among the best are the streaming bratwurst punched up with juniper spiked sauerkraut and the seductively sweet Italian. Although served straight up (no bun), toppings of cheese, chili, onions and peppers are add-ons. A classic panini with thick slices of earthy portobello slathered with herbaceous pesto promotes chatting and sharing. The spinach salad spiked with goat cheese is too heavily doused with dressing, but the house-made potato chips are well-timed and arrive crunchy and hot. Growlers' food is not inventive, but soothing. I guess beer and food make a nice couple after all.