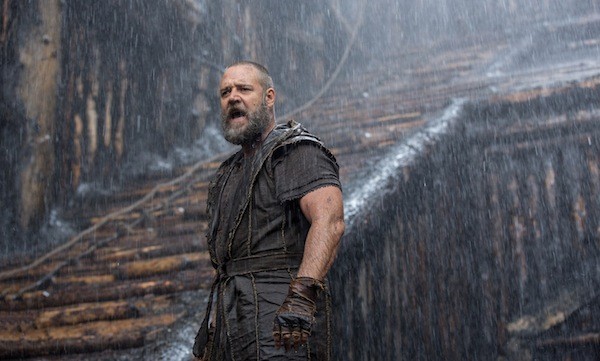 Accomplished enough to wash away all the doubts that preceded its opening, director Darren Aronofsky's Noah is a muscular and meditative work whose strengths should in the long run drown out the feeble protests of close-minded detractors (most of whom, as is par for the course, haven't even seen the movie). In the manner of the eternal queries of The Beatles vs. Elvis and boxers vs. briefs, how a person sides in the prickly The Last Temptation of Christ vs. The Passion of the Christ debate might determine whether Noah is worth one's time and money. Fans of Martin Scorsese's deeply spiritual and honestly probing Temptation will want to take a chance on this new picture, while devotees of Mel Gibson's shallow snuff film Passion should probably stay away from the multiplex and pass the time painting Easter eggs instead.

Helming his first production since he gave us 2010's best film, the mesmerizing Black Swan, Aronofsky has teamed with frequent collaborator Ari Handel to fashion a Biblical epic unlike any before seen on screen. The basic outline of course remains the same, as Noah (Russell Crowe) is tasked by God to build a massive ark and fill it with all manner of animals before the rains wash away all remnants of corrupt humanity. He's faithfully assisted in his assignment by his wife Naameh (Jennifer Connelly, reuniting with her A Beautiful Mind co-star), sons Shem (Douglas Booth), Ham (Logan Lerman) and Japheth (Leo McHugh Carroll), and adopted daughter Ila (Emma Watson, reuniting with her The Perks of Being a Wallflower co-star Lerman). But as the weather turns rotten, scores of raiders of the last ark lay siege to Noah's craft, led by the ruthless Tubal-cain (Ray Winstone). Thankfully, Noah and his kin are protected by rock giants who were once fallen angels; equally fortuitous is the fact that Noah himself is a man of action, swatting away invaders as if he were an Old Testament Indiana Jones.

Clearly, this isn't your father's Biblical interpretation. Yet for all his deviations — some which work, some which don't — Aronofsky remains respectful of the source material, and he accentuates an interesting twist by having his protagonist grapple with the idea of whether he and his family were meant to survive the global flood or perish alongside the rest of tainted civilization. Crowe delivers his best performance in years, portraying Noah as a devout individual whose stubbornness and single-mindedness occasionally blind him to doing the right thing, despite his pure intentions.

Aronofsky has never made a movie that wasn't a technical marvel, and Noah is no exception. Backed by a thundering score from Clint Mansell, the picture presents several spectacular set-pieces shot by the masterful Matthew Libatique, including a handful of weighty dream sequences as well as a rapid-fire montage that takes us from the creation of the universe to Cain's murder of his brother Abel (film editor Andrew Weisblum shares in the kudos for this stunning segment). The effects team is also up to the challenges set forth by its director, with the resultant CGI working in the service of a story that demands its share of spectacular visuals. Perhaps the most important of these is the seafaring ark itself, a monolithic construct that sails forth with God's blessing even as the rest of the planet becomes no more than a wide, watery grave.