At The Kilted Buffalo, you can get a little off the top 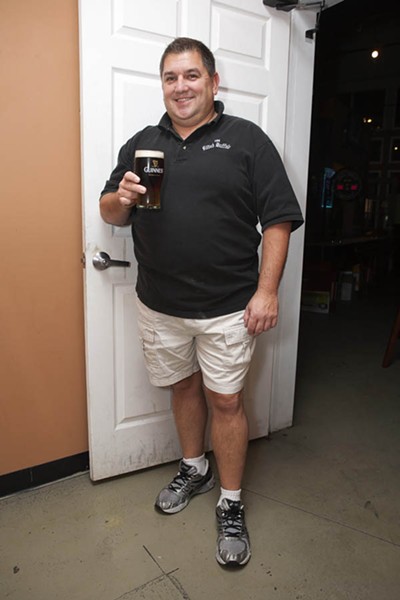 Now that winter's almost here, it's time to start considering how to avoid being outside as much as possible. Guys, Shawn Shrader has got you covered, offering a haircut plus frosty beverages and the game, all in one spot. His Celtic, Scottish-themed pub, The Kilted Buffalo, is located in the heart of Birkdale Village and houses a contemporary barber shop. With a clientele that spans generations, he keeps his customers happy with rare pub games and competitive prices. And if you're in search of a new place to post up on Sunday for all your NFL needs, The Kilted Buffalo provides catered food and plenty of beer to keep everyone in high spirits, even if you're in last place on your fantasy football league.

Creative Loafing: The Kilted Buffalo is such an authentic spot; was there an "Ah-ha" moment?

Shawn Shrader: I don't know if there was necessarily an "Ah-ha." I'd taken some time off from the service industry and was ready to get back into the neighborhood pub business. I wanted a different concept, so I started researching. At the time, there was nothing like The Kilted Buffalo in the area. Even in a down economy, whether a guy has a job or he's looking for one, getting a haircut isn't something he'll give up. And statistics show people are still drinking, so by combining the pub and barbershop, we'd found two concepts that could weather any economy.

So you set up shop in Birkdale; so far so good?

Birkdale has been great. It's a mixed crowd and a lot of foot traffic, thanks to the shops and restaurants. The best part of pub ownership is the people. No day is ever the same. We can be creative with what we do week in and week out. If something is working, we keep it up. If it's not, we change it. I'm happy I took the risk. I have a great staff; two out of three bartenders have been with me since we first opened [in July 2010].

And your salon staff?

We're really selective about our salon staff. It's not a normal concept, and we want them to be excited enough to really sell the idea. They are a very professional group, and great at what they do. It's a fun place to work, very different from your normal salon.

You've got a lot of unusual pub games going on; what's the story?

I designed the glass wall between the pub and barbershop for the Shuffleboard. When we were opening, I told my gaming company that I wanted it and they tried to talk me out of it. Shuffleboard was popular in college, so I asked them to find one, and then I bought it. I don't charge anything to play, and it was a great decision. Our other games are just as unique, like Bimini Ring Toss and the Shut the Box Dice game, a pub game I picked up in South Florida that I can't keep on my bar. People buy them right off me.