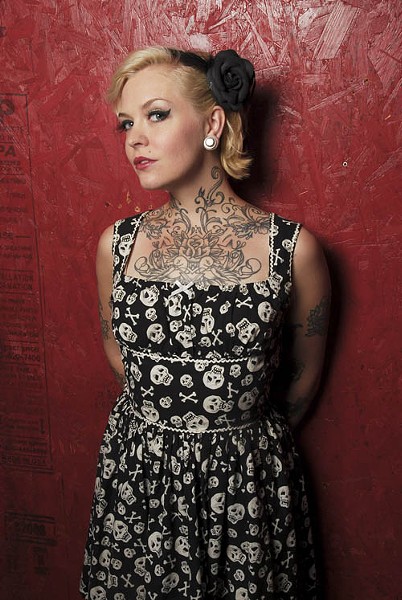 Hotter than a hand grenade and sweeter than a Maraschino, Kaya Stowers, aka Cherry Von Bomb, has the capability to taunt you, tease you and make you laugh at her quirky charm and sass, regardless of whether or not she is on stage. Creative and classy, she allures her audience with natural, coquettish choreography and sinful winks that make you smile and beg for more. While she is best known for her go-go dancing and burlesque skits at Snug Harbor's Shiprocked, this lady is immensely ardent about her art form, performing in a troupe and alone on a regular basis. But whether surrounded by fellow bombshells or saucy and solo one thing is indefinite. She will seduce her crowd like a delectable, rockabilly siren.

Creative Loafing: How and when did you get into burlesque? How often do you Perform?

Around 2008, my friend Colette called me and asked if I wanted to be part of a show that she was approached to do with some other girls. A burlesque show. I did it and I performed and I was her submissive role in her skit and I didn't go topless. When the show was over I just got the biggest thrill out of it. I was dead set after that. I was like, "This is what I wanna be and this is what I want to do."

When did you start dancing for Snug Harbor's Shiprocked? Do you perform any other time than Thursday nights?

Three years ago. I started going regularly because my friend Amee was go-go dancing and I knew everyone that was dancing. Amee suggested it one night so I asked Scott Weaver. This whole experience has made me and Scott a whole lot closer. I perform pretty much every week at Shiprocked and then I have my solo shows where I travel pretty much every weekend to Charleston, Winston Salem and Raleigh. I am also a part of Kabarett Vulgare, a sideshow troupe that is a bastardization of traditional Wiemar Cabaret and American Circus Sideshow.

What is your favorite aspect of performing? Why?

Being able to have fun and laugh at yourself 'cause if you're not laughing at yourself, everybody else is. Meeting other performers, some of which are the most confident, awesome women and the best drag queens a girl could ask for.

Every time I have seen you perform, you are wearing a different costume. Do you make these yourself?

Most of them are just shit that I had in my closet that I put dazzles and sequins on. I do make my own pasties which takes time but is totally worth the effort. When you come up with creative pasties or creative ideas in your head it makes everything so much more awesome and I get excited to perform.

Are there any negative attributes of being in burlesque?

Tons. Unprofessionalism of other performers for one. The disrespect that you get from people [patrons]. Some of them are just rude. And people talking shit, thinking you're a stripper when you're not. It's an art!