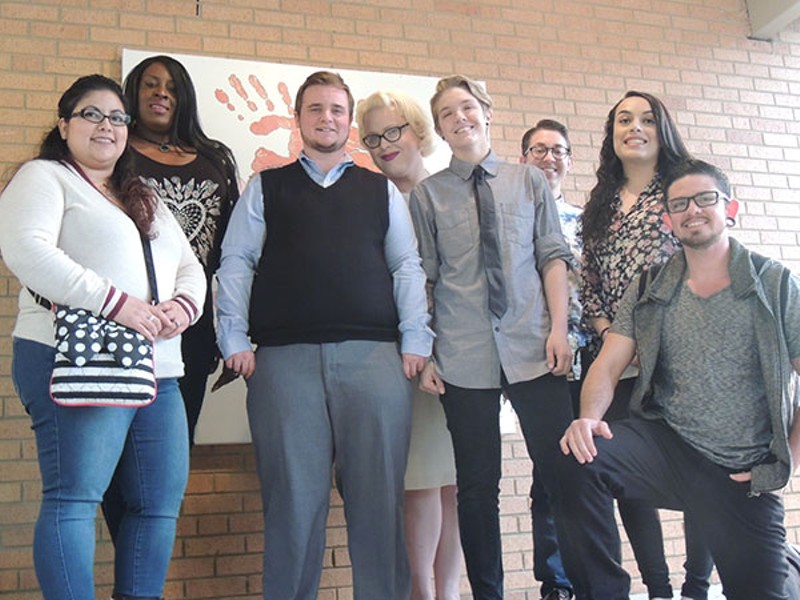 A few of those who attended Transcend Charlotte’s latest meeting, including founders Trey Greene (center in vest) and Che Busiek (center in tie). (Photo by Ryan Pitkin)

For many people, North Carolina House Bill 2 is a talking point; something to argue over on social media and disrupt the life of Springsteen fans for a night.

The new law has affected many more people than just those in the transgender community, but for the people in Wedgewood Baptist Church last Sunday night, HB2 is personal; a threat to their way of life.

They were there for Transcend Charlotte, a service and support group for transgender people in the area that has been meeting since summer 2015. Although Sunday's meeting was focused loosely on HB2-related issues, the group is about much more than that. At its most recent meeting, members spoke about "passing," being stared at, depression and any other subjects that came up as a result of the HB2 talk.

"We pick a topic and just go with it. It gives people an outlet to say, 'Here's a bunch of other people and they're like me and that's cool,'" said Che Busiek, co-founder of the nonprofit. "We have about 10 regulars who are the core members, and the rest of the people come to one or two meetings and they're good. They make friends there and we see these friend groups branch off. They're able to sit down in a meeting, talk a little bit, but the main thing is they see other people who are like them, make friends with them, and they're able to do their own thing. That's awesome."

A seemingly small moment shared at a single meeting can make all the difference for someone struggling with gender identity or a traumatic past, a common thing in the transgender community. Research differs, but studies have shown that over half of transgender people have been sexually assaulted, with some studies putting that number as high as 66 percent.

With or without a traumatic past, transitioning can be a lonely process. For Busiek, who only realized he was transgender last year at the age of 29, it was a confusing time that led to depression and self doubt. He had grown up in a small West Virginian town and had never heard of a transgender person. He had been an out lesbian since his teenage years, but knew something wasn't right.

"The best way I've heard it explained is if you pick up a pen with your non-dominant hand and try to write, you could write but you're going to know it doesn't feel right," Busiek said.

He attended counseling, but it only led to more confusion and dismay.

"I was almost 30 and still binding my chest," he said. "That's something that you feel like, OK, when you're in the fifth grade and you start going through that, that's one thing, but once you get to adulthood you're like, am I going to grow out of this? Is this something that's going to go away? I talked to my counselor and the counselor didn't know what to do. This is when I really had a mental breakdown. If the counselor doesn't know anything about this, maybe there's nobody like me. I didn't know what to do."

Desperate times call for desperate measures, and Busiek soon found himself in a bakery — driven by pure instinct — seeking out a trans man he had met once through a friend. He startled the guy by asking him mid-shift if the two could talk in private.

"He's thinking I'm going to tell him something terrible," Busiek said. "I said, 'Dude, I need you to talk to me about trans people. I don't know anything and I'm really not doing well.' He was like, 'Oh! That's it? I can do that, that's fine.' So he broke it down for me and put me in contact with a counselor and that's really when the journey started taking off for me."

He said he felt like he broke through a wall. Since then, everything has changed for him.

"It was because I never had anybody explain it to me and I'd never heard anything about it," he said. "I'd never had any examples and I didn't know that that was a real thing. So to have somebody say, 'This is a journey and you're going to go on it for the rest of your life and where you are is cool and there's lots of people like you,' that to me was a gift."

Busiek's new friend at the bakery gave him a homework assignment: go meet another transgender person. Busiek was flummoxed. It had taken him 29 years to meet just one trans person.

He set up a meeting with Trey Greene, a transgender man that he heard from a friend was interning at local LGBT youth service and support center Time Out Youth. The two met and discussed the difficulty of connecting with others members of the transgender community.

Soon thereafter, they began holding an event called GenderFusion at Petra's Piano Bar in Plaza Midwood. GenderFusion is a variety show originally created to raise funds for Greene's top surgery — a sex reassignment surgery that often involves a bilateral mastectomy — but would later fund the creation and continuation of Transcend Charlotte.

"[Transcend] started out just as a group for trans guys, but we had so many people contacting us from all over just needing help," Greene said. "People were calling us in the middle of the night and saying, 'I'm 55 and I've never come out to anybody.' It really just rose out of the need in the community. It wasn't the plan to do it, it was just a matter of so many people wanting to have that space where they could talk and where everybody is welcome."

As helpful as that is, Busiek and Greene have created more than just a place where people can talk. They've also added TransCloset to the services offered by Transcend. TransCloset offers free clothing choices for those going through transition to keep or just express their gender identity at meetings.

Transcend isn't the first support group for transgender people in Charlotte. A group called Genderlines has been meeting for years and is popular among the older trans population, while Time Out Youth also offers support groups for younger people. Transcend aims to help the demographic in the middle, although people from all over-18 age groups attend meetings and Busiek and Greene work with organizers in each of the previously mentioned organizations. They will refer people to anywhere that can help them.

Transcend is an open group that invites anyone to join. Its most recent meeting included an asexual cisgendered person, a partner of a transgender person and the mother of a teenaged transgender person. The group's openness is one reason it's grown so quick. Between 25 and 30 people show up to an average meeting, which can sometimes be too many for an effective support group.

At Transcend's next meeting on April 24, the group will branch out, offering a separate group for parents or partners that will run simulatenous to the regular meeting.

"We get a lot of parents that don't know what to do," Busiek said. "Because that's a death, that's a loss for them. It's not that they're child is gone or anything, but it's a loss of a son or a daughter." He said his mother is supportive of his transition in theory but still struggles with it.

"For my mom, that's something she cannot deal with," he said. "She's trying so hard to be supportive but I understand. That's hard. You had a daughter and you can have all those memories, but I'm your son now."

Susan Mayo attended the most recent meeting with her 18-year-old transgender son, Ethan. The Queen's Grant High School senior came out as transgender to her last year.

"That was pretty difficult. He came out to me [as a lesbian] a while before that. It didn't shock me. It didn't surprise me at all. But this was a lot harder," Susan said. "I'm going through my own transition too of dealing with the fact that I had a daughter and she doesn't exist anymore. That's tough. I haven't shared a lot of that with him."

As a way to discuss her own personal journey while helping her son through his transition, Susan launched TransMom, a Facebook blog where she writes about her son's process and broader trans issues. The blog became a point of contention between her and Ethan when she began posting personal things about him. Things came to a head when she posted before and after photos. He confronted her about it and she quickly removed the pictures.

Ethan now says the whole process has made them closer.

"I say everything that I'm feeling to her," Ethan said. "There are some things that I obviously can't talk to my friends about that are really personal to me. If I need to talk about something that's about me and my body, I have to tell someone, and it has to be my mom. We've obviously gotten closer and found mutual respect about what's OK to talk about and what's OK to do."

For people who don't have a mother like Susan to turn to, Transcend can either serve as that family or just a quick respite from a stressful time. Busiek recalled a recent visitor who attended and said she had been so depressed and didn't think she had anywhere to go.

"That to me is why I'm here, because I want you to know that there is a reason to live and that you're not the only person that's like you," Busiek said. "We want one person at a time to feel like they are wanted and loved and see that there are other people that are like them. That's it, and if we do that then I did my job."