Put the flash on

Charlotte Rapper Elevator Jay stares at the camera with suspicious eyes. His camouflage shirt contrasts with the white backdrop. A rope tied around his left hand goes behind his neck before leading to four fish strung up and anchored by his right hand. A towel hangs from his left pocket, implying that Jay's fishing hobby ain't clean. Jay is as dirty South as it gets. His hat, of course, reps the great state of North Carolina.

The portrait described above, which Charlotte photographer Kevin "Surf" Mitchell shot, is one of more than 100 photos of North Carolina rappers to be featured in Don't Wait 'Til It's Cool, a groundbreaking exhibit showing at BLKMRKTCLT in Camp North End on Sunday, July 15.

Chanel Nestor, founder of North Carolina Always, an organization aimed at supporting arts and culture that isn't recognized by the state's mainstream funding sources, put together the show. Nestor likes to point out that, while Surf's Elevator Jay portrait looks like a staged studio shot, it was anything but.

"Surf is actually at the pond," Nestor tells me on a recent Saturday afternoon. "He put a white screen in front of the pond, Jay had just got done fishing."

The story portrays the rawness of the photos featured in the exhibit, aimed at highlighting photographers who work to cover the local scene, in which photographs and social media are such an important part of building a brand.

It's an idea Nestor had floating around in her head for some time, inspired by her beginnings as a fan who began showing up at local shows in the Triangle area in 2010 and snapping photos for her blog, Chanelly Knows NC.

"This event had already been in the planning stages," Nestor says. "I've had this idea for years, especially from me starting out blogging and doing photography, and that's kind of how I got in, was these quick snaps at events and stuff like that."

While Nestor originally planned to call the exhibit Seeing Sounds, an Elevator Jay tweet in March seemed to fit her vision much better. In the tweet, Jay stated, "Ima say this again. Don't wait till it's 'cool' to rep the Carolinas." He was following up on a tweet from December 2017 in which he wrote, "Don't wait till it's 'cool' to fly the Carolina flag." The latter tweet got the message across, however, and local creatives shared it hundreds of times.

When Jay's tweet went viral locally, Nestor had already begun curating photos for the exhibit, which she hopes to continue to add to after showing it in Charlotte and Durham, turning it into an archive collection of sorts and potentially publishing a book of photos in the future.

"I just want people to understand the diversity of these artists and know that it's not what you think hip-hop is and what you think rap is; it's not that," Nestor says. "There are shots of these artists with their families, with their children; these are human beings that have this creative sense. I just want people — especially people who aren't really involved in that scene — to understand that this is an art form. Hip-hop is an art form, and North Carolina has been central in developing it as far as its reach."

However, Nestor also emphasizes that the event is mainly centered on the work of the photographers, even more so than the rappers involved.

"It's really just paying homage to those photographers that have been working their ass off to support this scene and don't get events for them," she says.

Local photographer David Butler, founder of Analogue Luxury, has a story similar to Nestor's in that he came up on the scene by attending shows and posting snapshots to his blog, DavehasWingz. Butler has known Nestor since 2015, when he served as a videographer for her first NC Always event, and has been encouraging her to "press the gas" on the upcoming photo exhibit since the two discussed the idea not long after that first event. 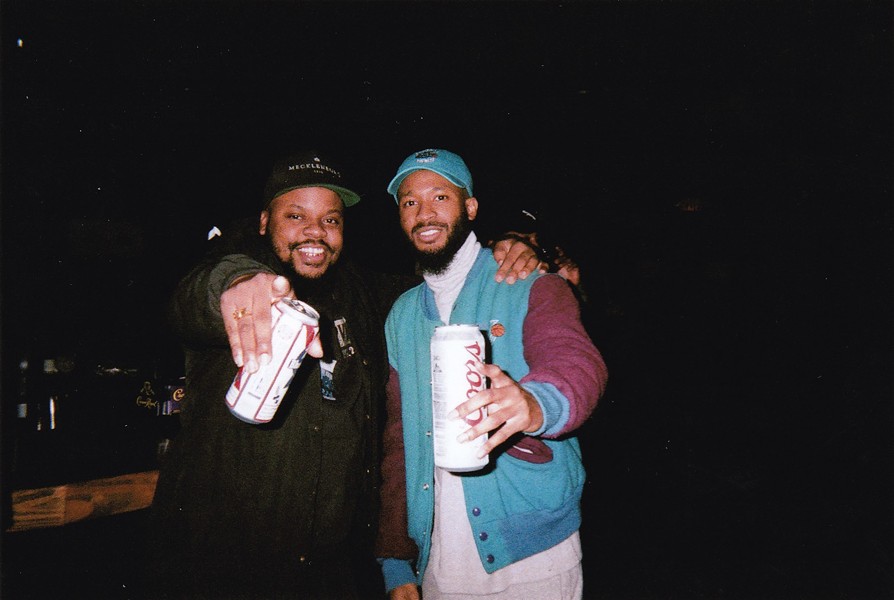 Butler says he's been holding on to an archive of photos from local shows and hasn't wanted to simply post them to Instagram, but wanted to make them a part of something meaningful. Don't Wait 'Til It's Cool was the perfect opportunity to do that.

"These are the things that we need to amplify. This is how you go from having these local things and artists collaborating with artists to us having something that we can showcase nationally," Butler says of the collection. "I'm super excited that we're taking this step as a scene and we didn't have to wait for an outside influence to make it happen. It came from somebody from within, and we're working from within our network to be able to execute it to the best level that we can. That just goes to show that all the resources that you really need to push things forward, they already exist if you just look for them and contextualize them correctly." 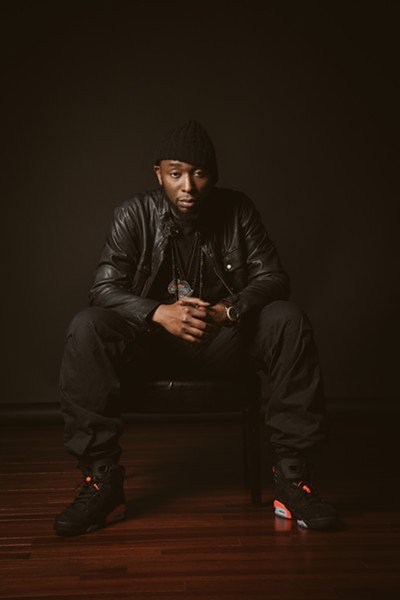 Chris Charles is another North Carolina photographer featured in the collection. Charles, 44, has been shooting in North Carolina for 10 years. He has recently moved away from covering live shows and focused more on portraiture, but says both are integral to the hip-hop scene. He says he's excited to see an exhibit shine a light on multiple styles.

"Anything like this where it showcases the photographers who are actually out there in the pit, all hours of the night, doing the work, getting dirty to capture the best photographs of these artists, is definitely important," Charles says. "It's almost groundbreaking. I've been in the scene for a few years now and this is the first time something like this has popped up. It made me feel good that somebody actually understands that there would be no images without these photographers out here doing the work and supporting these artists."

On a recent Saturday, Nestor and her 16-month-old son, Nathanael, sit at Tupelo Honey. She orders her favorite dish in Charlotte, fried green tomatoes on a bed of goat cheese grits. Every once in a while during our chat, Nathanael gets restless and lets out a high-pitched scream, garnering looks from the South End crowd in the dining room.

Nestor apologizes and laughs, telling me she can see he's already practicing for the "terrible twos." But the kid is too adorable to be annoyed with. Once he's seen that he's gotten my attention, he cracks a smile and eats another piece of biscuit, content for the time being.

With all Nestor has going on — balancing her job at Applebee's with single motherhood — one could excuse her for wanting to back away from the thankless nonprofit work she does with NC Always, even if just for a short time, but the thought doesn't seem to have crossed her mind.

Nestor launched the organization in 2015 after five years of blogging about the local scene. Her first event was an ambitious showcase of black female artists from North Carolina called MayDay. During the day, organizers hosted film screenings in four cities — Charlotte, Asheville, Wilmington and Greensboro — before folks involved with all four events convened at the now-defunct Showroom Gallery just north of Uptown for a party.

In November 2015, NC Always hosted Highway Distribution, one of the final three shows to happen at the Tremont Music Hall. The show brought together rappers and performers from North Carolina, Georgia and Virginia. It included local acts like Lute and Elevator Jay as well as Drake collaborator Nickelus F from Richmond, Virginia.

"We were bringing in all different types of artists just to kind of meet each other, that was basically what it was about," Nestor says. "I named it Highway Distribution because most people are traveling either [interstates] 85 or 40 to get there. Just kind of building on our concept, that show was very definitive on what I planned to do with NC Always."

But it's not all about hip-hop and arts in the big cities. Nestor, who has a master's degree in agricultural education from North Carolina A&T State University, has a passion for spreading her work to the more rural parts of the state where folks don't have as much access to resources.

In high school, Nestor moved from Winston-Salem to Davidson County, a more rural area just south of the town she grew up in. Her experience there would influence her passion for community building in rural areas.

"It was like nothing; no transportation, a diminishing arts program," she remembers of her time in Davidson County. "I felt like there was nothing left around, there was no way to get out. Especially if you don't drive, you're just stuck. So that's where my mindset comes from. These students need to have access to everything just like urban youth do."

For Charles, who currently lives in Apex, Nestor's focus on rural community building is one more reason that he believes it's important to get involved with the work of NC Always. (Even our cover subject in this week's issue, R&B singer Cyanca, is originally from the rural town of Smithfield; it's a North Carolina thing.)

"There are a lot of people who are doing great work out here, who are out in the country, in the sticks," Charles says. "I'm from New York, so I'm familiar with being able to go down the street and build and connect with people. But if you're living out in Siler City or some small town, it can be hard to do that. Because of technology and basically being able to share your work across the world with the click of a button, it's important that these photographers and these artists are getting their shine."

Nestor, who currently lives 45 miles west of Charlotte in Shelby and works on community-building initiatives there, hopes to include many more rural artists in the collection that her upcoming exhibit will mark the start of.

Her next NC Always event, set to take place in October, will be a conference for African Americans who work in the agricultural field and rural community development. She plans to return to school to pursue a PhD in rural sociology.

When I ask Nestor what it will take to get people to realize that it's already cool to represent North Carolina, she's quick to reference organizations like the local Arts & Science Council and North Carolina's African American Heritage Commission, two big arts institutions that she believes are not pulling their weight in supporting a diverse range of arts throughout the state. "They already recognize it, it's whether they support it or not," Nestor says. "Whether it's financially, whether it's through promotion, that's really what it is."

She points out that Nina Simone's home in Tryon was nearly torn down before the National Trust for Historic Preservation stepped in last month to designate the site a "National Treasure." (And if you pass through the tiny town of Hamlet, you'd barely know the great jazz innovator John Coltrane was born there.) In the few weeks since Simone's house was saved, Nestor's seen more actions taken by organizations than in years past.

"They wait until people from outside the state support what's going on, and then they support it," she says. "It's become a national archive, and now they're wanting to support it and do all this and have events honoring Nina Simone. It took for her to get these Netflix movies and all this stuff for them to really support in the way they should have."

Nestor's ready to make that sort of work happen before it becomes obvious to everyone that it needs to. And if Sunday's show proves anything to the folks who still don't know, it's that North Carolina has already been cool.