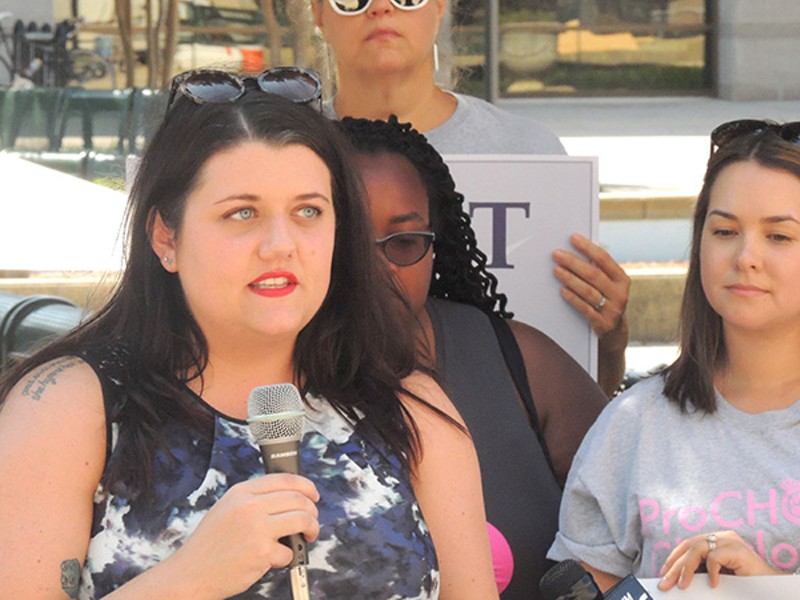 Calla Hales speaks at a recent press conference in which she and others called on the city to help mitigate extreme tactics used by protesters outside of abortion clinics in Charlotte. (Photo by Ryan Pitkin)

The temperature was already scorching outside of the Charlotte-Mecklenburg Government Center at 11 a.m. Thursday, Aug. 17, when a group of women gathered under a small tree to hold a press conference calling on the city to do more to protect Charlotte's abortion patients.

Save for a handful of media folks, however, nobody was there to heed the call.

Jen Ferris, director of reproductive advocacy at Progress NC, led the press conference, speaking out against aggressive picketers who over the last year have stepped up their tactics at clinics like A Preferred Women's Health Center in east Charlotte. She was joined by representatives of SisterSong, NARAL Pro-Choice North Carolina and other advocates.

Ferris called on the city to take action on three fronts: to ensure police enforce laws that protesters have repeatedly broken, such as sound ordinances and standing in the street while cars approach; to place No Parking signs in front of the clinic; and to ensure that sound permits are distributed evenly.

Clinic staff and volunteers have consistently tried to apply for the same sound permits regularly given to protesters, but are rarely approved.

They hoped a recent change in the process, which requires permit seekers to apply through email to a specific person, would change things, but said they have been ignored on that front, as well.

Despite the absence of city leaders at Thursday's press conference, the need for action outside of APWHC has gotten more attention since Creative Loafing reported on the escalation of protests outside the clinic in March.

In June, Cosmopolitan ran a profile of Calla Hales, co-owner and lead administrative assistant at APWHC. In July, Hales was featured in a Rewire documentary called Care in Chaos, which showed first hand the harassment that staff, volunteers and patients face on a daily basis at the clinic.

We sat down with Hales following the press conference and asked if the recent attention has helped in her efforts to make APWHC a safer, less intimidating place for patients.

"I think it has," she answered. "Especially with the documentary. It's stuff that you can't really negate. When you see evidence from a third party filming this and then comparing it to another city, it's pretty obvious that something's wrong."

On Aug. 14, Progress NC launched a campaign to help raise awareness about abortion-clinic access at APWHC and around the state. Three digital billboards ran for a week along interstates 77 and 85 in north, west and south Charlotte; they read, "The people of Charlotte deserve access to abortion without shame and stigma."

Hales, whose parents founded APWHC, says she doesn't believe any pro-choice such billboard campaign has taken place in the state's history.

On the day the billboards appeared, Mayor Jennifer Roberts released a statement in support of making changes outside of APWHC that could lessen the intimidation factor for patients.

Roberts suggested enacting policies asked for by Ferris and others at the press conference earlier that day, such as training police to better enforce existing sound ordinances and placing No Parking signs in front of the clinic, where protesters often park large RVs meant to confuse patients and make it more difficult for them to get to their appointments.

Hales also believes one of the RVs hosts the enigmatic "Abortion Info" Wi-Fi signal, an unprotected network meant to lure patients to log in, but not before forcing them to watch a slew of anti-abortion videos.

"If we do not trust women to make these choices, then women will never be equal," Roberts wrote in her statement. "If we as a city do not stand up for women's constitutionally protected rights, who will?"

It would take an effort from the city council and city manager to make any real change outside of APHWC. City council members such as Julie Eiselt have spoken fervently in favor of easing access for patients at the clinic, while others have reached out to Hales personally, saying they are with her but there's not much they can do. In April, City Manager Marcus Jones said the city would not restrict parking in front of the clinic, as the street where it's located isn't busy enough to justify it. Jones promised a heavier presence of police outside of the clinic, which Hales has seen, although she said it hasn't helped.

"There has been an increase in presence on Saturdays, but it does not lead to enforcement. They just sort of stand there," Hales said. "Then you have weekends like last weekend, where [protesters] brought their kids out and the cops had them in their cars. They were babysitting protesters' kids in their air-conditioned cars, and then you think to yourself, 'Wow, would you have done that at a Black Lives Matter rally?'"

Last fall, as reported by Rewire, police responded to a call about a protester openly carrying his gun in plain view of clinic patients, but did not confront the man, nor did they file a report. Hales has every reason to demand that police protect her, as she's no stranger to threats herself.

In June's Cosmopolitan article, Hales opened up about the time she was raped in a parking lot after a man she had been on a date with found out she was an abortion provider. She's faced constant internet harassment since the article was published.

On Aug. 8, the Roman Catholic Diocese of Charlotte notified police that someone had left a voicemail at its charity offices seeking guidance "after having thoughts of doing physical harm to an abortionist." Hales was unaware of the report until Creative Loafing informed her of it but the pressure has been building, and it's beginning to show.

In July, Hales had a rare moment in which she lost her cool, screaming in the face of a protester who continued yelling at an AWPHC patient even as the patient broke down crying and fell to her knees in the parking lot. The police stood nearby and watched passively.

Halles regretted the incident, and apologized to her staff and team of volunteers. "I get mad at them when they do that stuff, so I really shouldn't," she said.

She knows the dangers of doing the work she does. The threat has been reinforced in her mind ever since close family friend Dr. George Tiller was murdered in 2009 when she was in college.

"His death fucking terrified me," Hales recalled. "My parents tried to keep it from me. I came out of a study session to multiple texts and voicemails from friends asking, 'An abortion provider was murdered, are your parents OK?' There were five years between George's murder and my start at the clinic. I had time to process it and let it resolve, but I still think about it for a split second if I'm walking through public, open areas."

There was a police officer on hand at Thursday's press conference, but he was there to serve, not to protect. Shortly after the women were done speaking, a Mecklenburg County Sheriff's deputy served a summons to Leila Forbes, a member of ProChoice Charlotte who volunteers at APWHC, demanding that she appear in court on Aug. 28 on charges of injury to personal property.

Forbes said the charges stemmed from an incident that happened months ago in which she and other volunteers noticed a GoPro attached to the hood of a pick-up truck filming patients as they walked into the clinic. Forbes said she placed a red Solo cup over the camera to protect patients' privacy, but weeks later found herself charged with vandalism by Daniel Parks, a pastor associated with the Concord-based Cities4Life group, which leads the daily protests outside of APWHC.

Forbes said she didn't believe she damaged the camera, and that she already attended mediation and offered to pay for a brand new GoPro if Parks would agree to stop filming patients, to which he refused. On Thursday, she could only shake her head at the summons, while her fellow volunteers promised to join her on her court date.

And there they will remain, at least until Election Day.