Will Charlotte Ever Confront Out-of-Control Gentrification?

While sitting on the back patio of the Irish pub Workman's Friend in Plaza Midwood, talking with two members of the band Shadowgraphs for this week's music feature, my mind kept wandering back to when the pub was a No Grease, part of the legendary Charlotte-area African-American barbershop chain and a staple of the neighborhood for a while.

Walking into the building for the first time since the change came as a bit of a shock. Barber chairs were replaced with fine, rich, earthy wood tables, and the clientele — once consisting of an age-span of regulars from nearby predominantly black neighborhoods — was now predominantly young and white.

It was a microcosm of the rapid changes that have happened in Plaza Midwood and elsewhere since I left Charlotte for a few years beginning in 2013. But even No Grease had not occupied this space at the corner of Central and Thomas avenues for as long as some places in the neighborhood. Other spots were being torn down lock, stock and barrel, and replaced by — or, in the case of the Thirsty Beaver, surrounded by — towering condos. 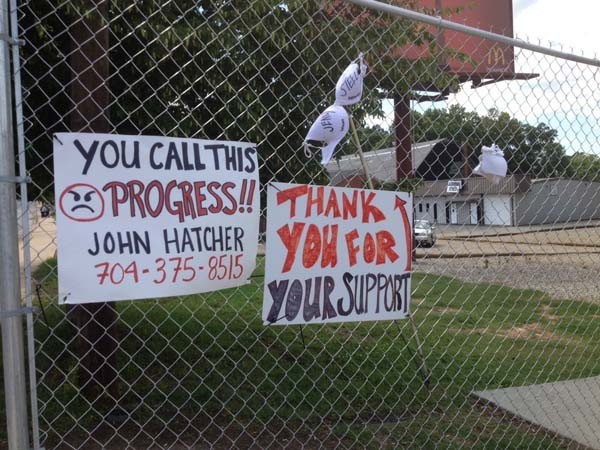 Gentrification is in full effect all across Charlotte, and we've been focusing on it all month long at Creative Loafing.

In the July 13 issue, news editor Ryan Pitkin wrote about developments in the Cherry community, where the historic Morgan School, built in 1925, now stands empty. In the July 20 issue, contributor Kia Moore wrote about Janelle Dunlap, whose art confronts gentrification. In this issue, Moore continues her series with a news piece on how artists themselves may be the first signifiers of impending gentrification before being pushed out of the neighborhoods they made cool.

Gentrification is a thorny issue. When I was living in New York's East Village in the 1980s, those of us who hung out in art circles complained of the gentrification of "our neighborhood." But the East Village — previously known as the Lower East Side — was not our neighborhood. It wasn't until the Beatniks arrived in the '50s, and other writers and artists flocked in during the '60s, that it became a counterculture haven. Before that, the Lower East Side was the domain of poor Russians, Ukrainians, Poles and Jews.

Something similar happened in NoDa in the 1980s.

The couple saw mill buildings as beautiful; perfect spaces for creating art. "They were able to envision what North Davidson could be, based on what they currently saw in the neglected neighborhood," Moore writes. "Sires and Lyons envisioned North Davidson becoming an arts and entertainment district for the city of Charlotte."

The most recent art spot to relocate away from NoDa is Dupp&Swat, which Moore writes about in this issue. It recently moved to The Plaza, and its co-owner, Davita Galloway, is not just a little bitter.

"Rent is increasing, forcing different businesses and organizations out," Galloway said at a recent Creative Mornings event. "You use our work to entice people to come to the city and to live here. [But] who wants to move to a place with no culture, no scene, and nothing's popping?"

In fact, Shadowgraphs, the band I talked to at Workman's, are thinking of moving their operations from Charlotte to the West Coast. Not because of gentrification, per se. But if Charlotte were to defend its arts communities instead of kowtowing to developers, the city might have a richer, stronger support system to keep artists from flying the coop.

In the next issue, stay tuned to Pitkin's story on the residents of a low-income housing unit in NoDa who have been told they must move out immediately to make room for new condos.

And where will they to go? It's a question we'll leave hanging for now.